On Saturday 23rd March, George, Harry and myself met up in Plymouth city Centre for outreach, before Laurie joined us later. Simon and Ed were both working so unable to join us, but I prayed for our group, specifically that God would bring people to hear Gods word being preached and for Christians to be encouraged if passing by, and we were blown away by just how good God is in answering our prayers!

George preached first and talked about the instability of Brexit and how politicians and people were worried about the future, but that our stability had to be in Christ who never changed and promised he would never leave us and forsake us, no matter how life went. A man in his early twenties stopped to listen, and as he went forward to the basket to get a free Bible, and I spoke to him and he was called George too. He said he was in the Navy, and had previously had no belief in God or spirituality and had been quite against it, but a while ago had gone to Church with his Mum and had some sort of spiritual experience which made him reconsider his views.

He was very open to talking and gladly took a new testament, some tracts and a card for our church and said he would think about what we spoke about. While Harry and I continued to hand out tracts to people walking by while George preached, a man walked over called David who had been listening to what George was saying. He was Polish and said he was a 7th day Adventist and asked if I knew of any Churches of that denomination in Plymouth. (I know some Seventh day Adventist churches have sound doctrine but others maybe not so sure in regards to not keeping the Sabbath on a Sunday but a Saturday and that those that didn't too were not saved.)

I later spoke with a group of 3 tall school kids age 13/14 who seemed a lot older. We had a good conversation and they took some tracts with some things to think about. There were several students from the school I work at in town that day and was good to be able to give them some tracts and were very shocked at what I was doing compared to being in school covering lessons, which will hopefully lead to some good conversations next week. I also saw 3 staff from the school and gave them tracts too, which could lead to an interesting week ahead!

I later preached about a gas explosion in an elderly woman's house that ahd happened that morning that caused massive devastation to her house and neighbors, and fortunately she survived with injuries. I tried to show how gas naturally does not have a smell, but the smell was put in there by gas companies so we knew if we were in danger, if not could be lethal, and how sin in peoples lives had devastating effects that could be seen in society. I also spoke on Luke 5 where Jesus healed the paralytic lowered through the roof. Jesus clearly showed us from this passage that he was God, he could rad peoples minds, and that peoples biggest problem is not their physical ailments or need to see a miracle before they would believe in God, but for their sins to be forgiven.

Around seven school girls aged 13 came up to me while I was preaching and started asking lots of questions about God, the Bible, why we were there, but also some disruption and ripped a new testament. We spoke to them which led to most leaving, but a couple stayed behind to ask serious questions about God and about how easy it was to get in trouble ins school and hand around with friends that led to mischief, and how they could stay out of it. They all took tracts and caused several passers by to stop and listen to what was going on. 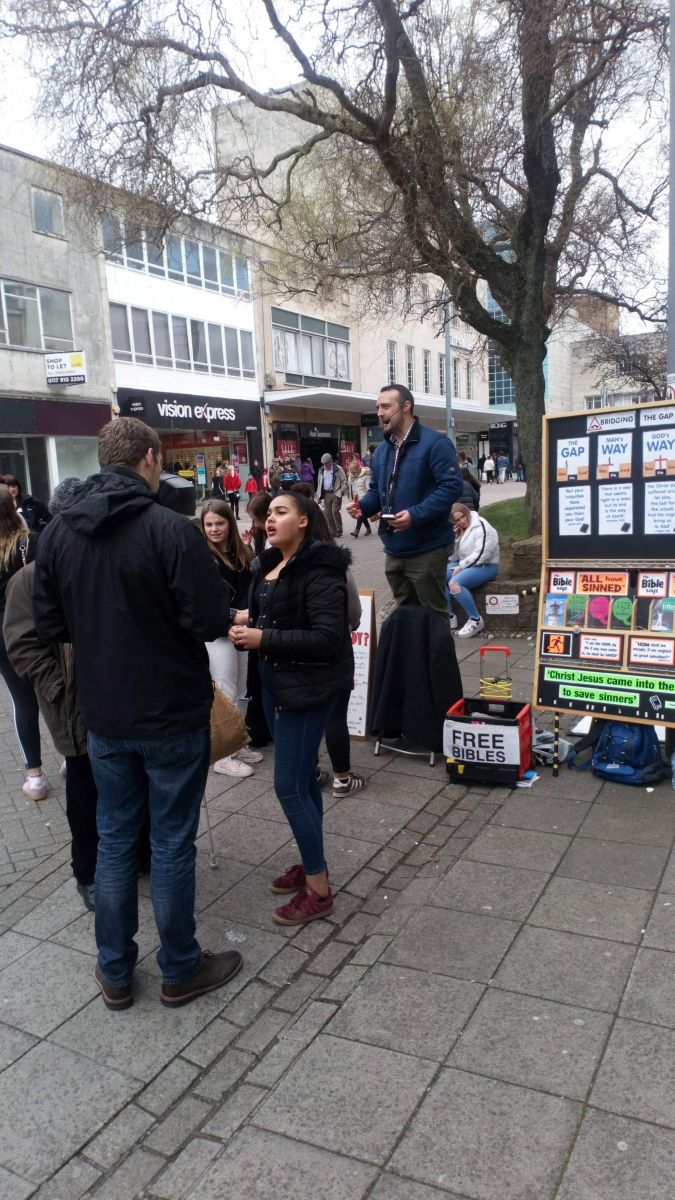 Laurie came a bit later and was handing out several tracts and had a great conversation with a lady (pictured) who said she was a Christian but had trouble with alcohol abuse. Laura was able to minister to her and share about how her Church does a recovery course which she would be more than welcome to attend

While Harry preached later on, a man with a cross bike drove up and got off and started listening and heckling while Harry preached. This also caused a few other people to stop and listen to what was being said. Harry used the mans bike as proof of a designer , and the man agreed his bike must have an intelligent designer, but denied God was the Creator of everything, and even said o me later he didn't believe his brain was intelligently designed! The man started filming me on his phone and asking lots of questions about where people came fo and who made God, and almost interviewed me for his Facebook, asking me various questions. He said he had been brought up in the church and baptized as a child but didn't believe now, but I shared a bit of my testimony with him and the gospel and what had happened to me when 16 and 24, and he opened up a lot more had eventually gladly took a New Testament and some tracts and a living waters DVD 'Why Christianity' which he said he would watch.

A man and woman that knew him stopped while I was speaking to him, and the man claimed that he was the devil and had done too many bad things wrong in life to be forgiven, but I said there was no sin that could not be forgiven because Jesus was God and suffered for our sins on the cross. The man asked if I would forgive him if he held a gun to my head and said he would shoot me, and I said yes I would forgive him, but only because I now have the Holy Spirit in me, and if all of my many sins had been forgiven because of Jesus, then I now could forgive others as I had been forgiven an even greater debt. He was a bit shocked at this, but his partner took a tract from me as they left.

A family from Scotland came to chat while Harry finished preaching that had moved down here while their Son was having physio. He was in his early twenties and said he had been in the army and an mine had blown up near him and led to damage to his pelvis and leg. They were evangelical too and knew well of Ray Comfort and the evangelism we were doing and were very encouraging and had started attending a church near me. They took some information about our church and some tracts and we hope to hear from them again.

There were lots of tracts handed out that day, with people stopping to read the intelligence test, others stood in shop doors listening while their wives shopped and lots of young people passing through going to the MacDonald's behind us.

When we packed up around three hours later we went for food and fellowship and were all blown away by just how good a day it had been and was so encouraging, especially that God had answered our prayers and we pray that people would repent and trust the saviour and see God's goodness and mercy to them in Christ. We hope to meet again next Saturday in Plymouth city and Centre and hopefully my Auntie who is 76, disabled and uses a walking frame and attends another church wants to come out and hand out tracts with us, as she takes tracts from me and posts them through letter boxes in surrounding streets, which shows you are never too old to be used by God for His work and so there is no excuse! SDG