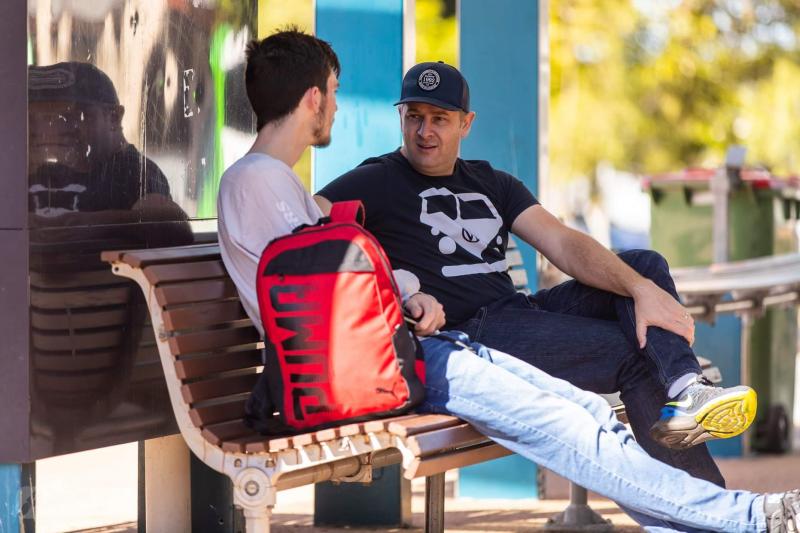 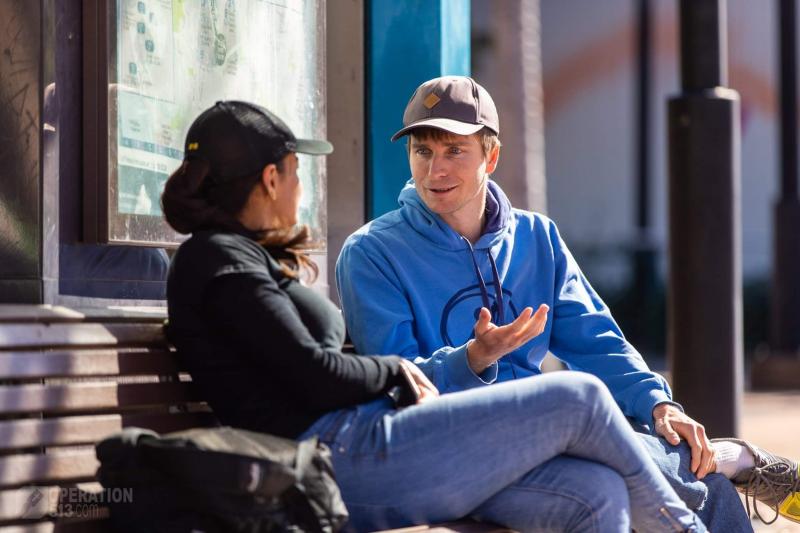 On Monday at Capalaba the team was a bit smaller than normal at only three over the afternoon but even when there were less labourers in the harvest, there were still many people who heard the good news!

There was an early conversation with two guys who at first said that there was no God. They were shown the buildings need a builder analogy and they got it, said it made sense but moments later they realised the implication, that means there is a God to whom they are accountable and they said they didn't want to talk about it anymore.

After a few more quick conversations later there was a time whilst the bus stop was empty and so the JW's who were set up were approached and asked how someone can be made right before God. In summary, as you would expect they said that you "exercise faith" in Jesus and you will receive the "free gift". Somehow they were desperately blind to the fact that they were attempting to earn a gift. Some time was spent in Romans 4:1-5 and Ephesians 2:8-10 but the issue was that they seemed unable to comprehend the message of grace.

They believe that faith + works = salvation and they have been taught that anyone who disagrees with them believes that faith = salvation + lawlessness. They are legalists and believe that anyone who disagrees with them is an antinomian. But they can't understand the simple message the Bible teaches which is faith = salvation + works. Sadly over the course of a fifteen minute conversation they couldn't grasp the simple gospel message. It was awful and sad to see, that people who a so assured of themselves are so blind to what God actually has said. Mary and Linda were encouraged to read Romans 3-5 this week and to take time to understand what Paul is saying.

This was followed with a quick conversation with Aidan that seemed to flow so well! Aidan at first said he was an agnostic but was shown how we know God exists and he said that made sense. Then he was shown God's law and saw his guilt but was hesitant to admit that he was really Hell-deserving. Once he acknowledged that he was asked how he could be forgiven and said, "I don't know, you tell me". So that is what happened.

Aidan came to understand it and was able to answer some questions correctly about the way to Heaven and where good works fit into the equation and as a result he said he would consider it and took a tract.

The most exciting conversation of the afternoon was with Anna. She and her friend Steve were waiting for a bus but when the bus arrived only Steve got on and Anna stayed to chat. The conversation spanned almost an hour as Anna, who had a Christian background came to understand how all the things she'd been taught fell into place. It was a beautiful opportunity as for the first time in her life Anna, who had attended Church most of her life finally came to understand all of the pieces of information that she knew about God and what He had done formed into the story of God's plan to save the sinful human race through Jesus Christ.

At first upon understanding the gospel Anna said she would consider but when she was older. Through the conversation and hearing more and more about Christ she said, "This has been very convincing, I think I want to trust in Jesus today". With many other topics touched on and her coming to understand the Christian life and a few other parts Anna took a gospel of John to read, said she wanted to go to Church on Sunday and was going to count the cost of following Christ!

The afternoon also had a range of other conversations but a late one took place with Austin. He was there with a few school friends who were being pretty distracting and rude but Austin remained resolved to listen and to understand. Unlike the others he had some level of Christian understanding but didn't know the gospel. Over the course of fifteen minutes, despite the attempted distractions from his friends Austin came to understand the message of grace. That through faith in Christ a sinner can be made right before God and will go to Heaven. He understood the response to this incredible gift, that all those who receive forgiveness will be totally changed, wanting to live for and serve Christ with their lives. He said he would read his Bible this very night to learn more about Jesus and was challenged to trust in Christ today!

What an wonderful afternoon of outreach! How good is God, using unworthy servants to advance His kingdom!