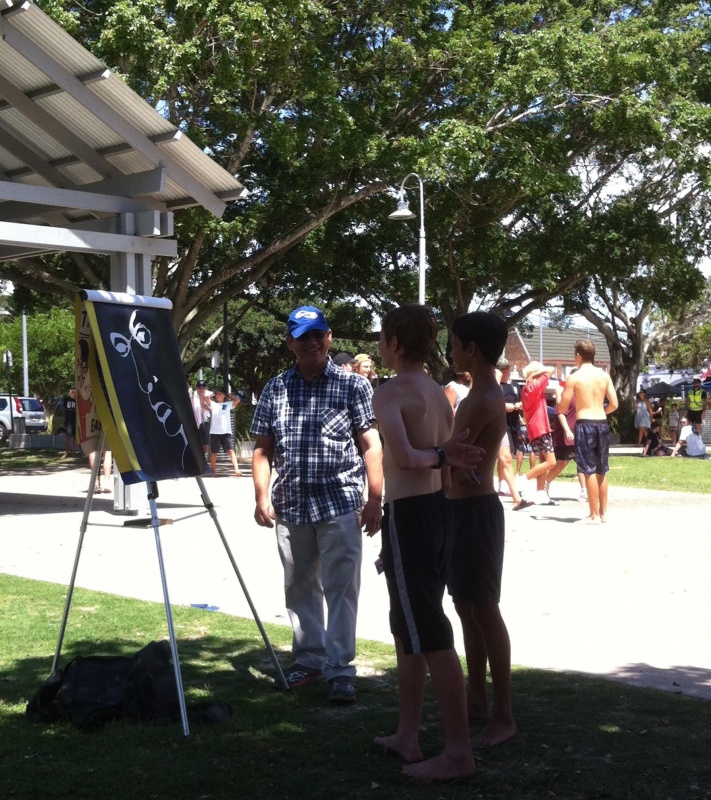 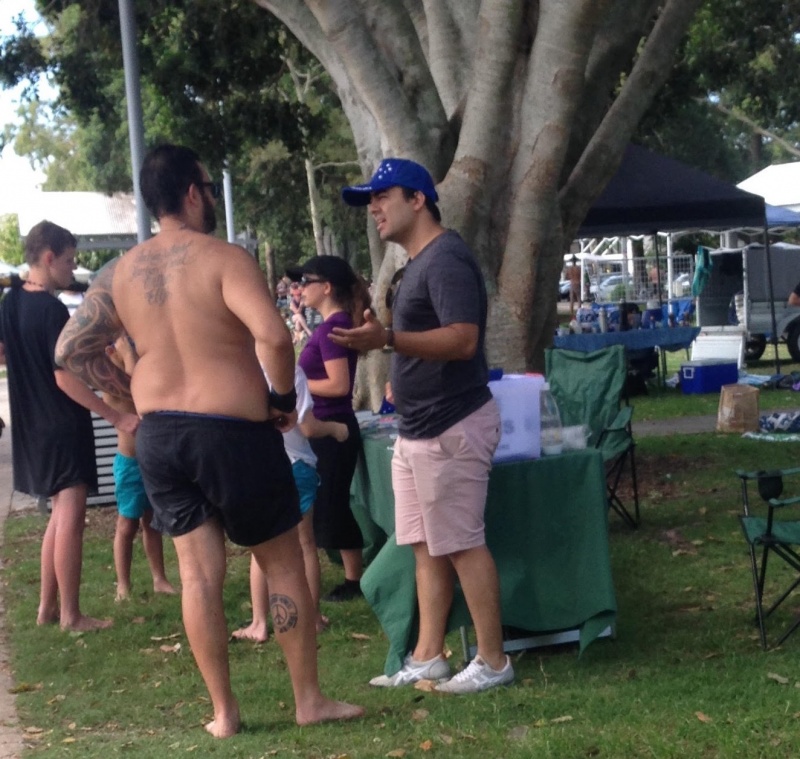 Our last outreach at Bribie Island was incredible!  The usually quiet island came alive as people flocked to the beach to celebrate Australia Day.  It was greatly encouraging to have our usual team joined by others who came from various churches and areas.  Between 1 and 3pm, around 900 Gospel tracts were distributed, as were many booklets, DVD's, and Gospels.  For most of the team, there was a continual flow of conversations.

Eli was a young man who approached the literature table and listened very intently to the Gospel message that was presented to him.  He was honest in answering the questions and in seeing his need of Christ, but he was taken through the Good News five or six times before he could understand that it was not by being a better person, or by having an impersonal faith that he could be saved.  He finally realized he must personally trust that Jesus died for his sins, and then turn from his sin in repentance.  He said it was something he wanted to do as soon as possible, and he promised to think about it very seriously.  He took a Gospel of John and a tract.

Several groups of young people went through the Good Person flipchart throughout the course of the afternoon.  One young man had many questions, but his main objection was that there was no way to prove the historical claims of Christ.  After a conversation filled with historical facts, examples, and illustrations, he left to seriously consider what he had heard.

A woman approached the Good Person flipchart with her husband and daughter.  While her husband and daughter quickly lost interest, she remained intently focused for the entire time.  Over and over her husband urged her to come away, but she insisted on staying to hear us out.  She was honest in her answers, and quickly came to realize her own sinfulness.  When she left, she was visibly moved by the Gospel.

Another trio approached the literature table, and while the somewhat intoxicated young man and his girlfriend laughed and asked questions, it became apparent that their friend was paying attention.  What was amazing was that, although they had to leave halfway through the Gospel message, they promised to return, and five minutes later, they did!  At the conclusion of the Gospel presentation, the two wandered off, but again their friend stayed to talk a few more minutes.  She said this was definitely something she would think about.  Pray that all three young people would deeply consider what they have heard, read the Bibles they have taken, and act on the message they have received.

Dylan, a young man from Spain, also asked for a Bible.  He thought he was good enough to go to heaven.  When questioned further, he appeared to have a work-based ideology.  He had been christened in a Catholic background, and felt secure that he was on his way to heaven.  He was given the complete Gospel message, his need of faith and repentance, and he seemed to understand.  We pray now that the Holy Spirit will move in his life.

Please pray also for 12 year-old Georgia, who heard the good news of the Gospel.  She needed no convincing to realize that she wasn’t a good person, and she certainly seemed to grasp her need of a Saviour.  She appeared extremely serious, and close to tears, but while it would have been great to continue talking with her, a sudden crowd of other youngsters arriving caused her to wander back to her family.  May she read the literature that she took, and continue to think deeply about her eternal destination.

Kye, Thalia, and Jamie engaged in conversation with another team member and heard the Gospel.  Please pray for them to keep their commitment to read through the Scriptures which they took.  Pray that the seeds which have been planted would grow, and not be choked out by the mockery of friends and the things of this world.

One lady came and asked for a Bible.  She said she was a Lutheran, but that she hadn’t been baptised.  She was told that there was nothing she could do to earn her salvation, neither works nor baptism could save, but that salvation was by faith alone in Christ alone.  This was a message she seemed to grasp, and she went away to consider it and read the Bible.

Pray for results from those whose lives were touched by the Gospel, whether by tracts, Bibles, or open conversation.  Pray too for fruit to spring even from the little seeds which were sown, the children who took tracts or asked simple questions.  Pray for those who realised their own mortality and sin.  Pray for those who took the Scriptures.  May the Word of God act in their lives, and may souls be saved by God’s grace triumphing through our outreach at Bribie Island. 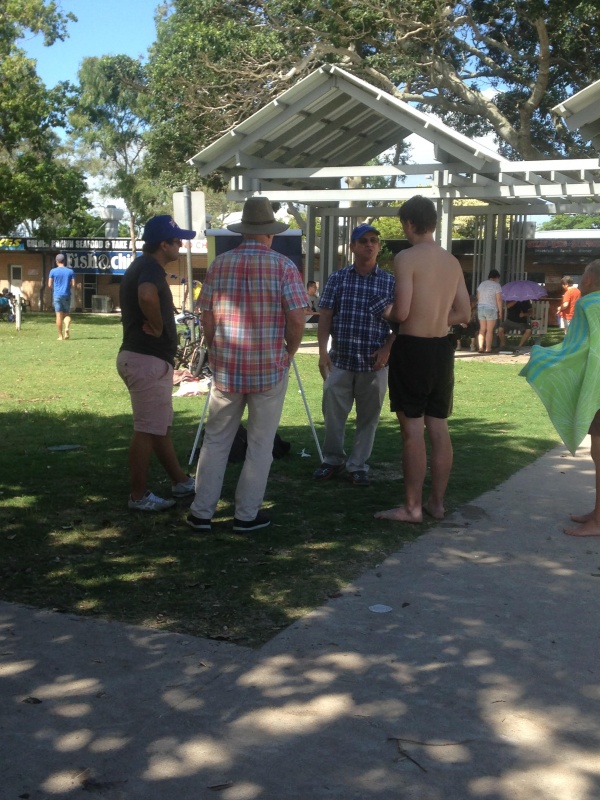 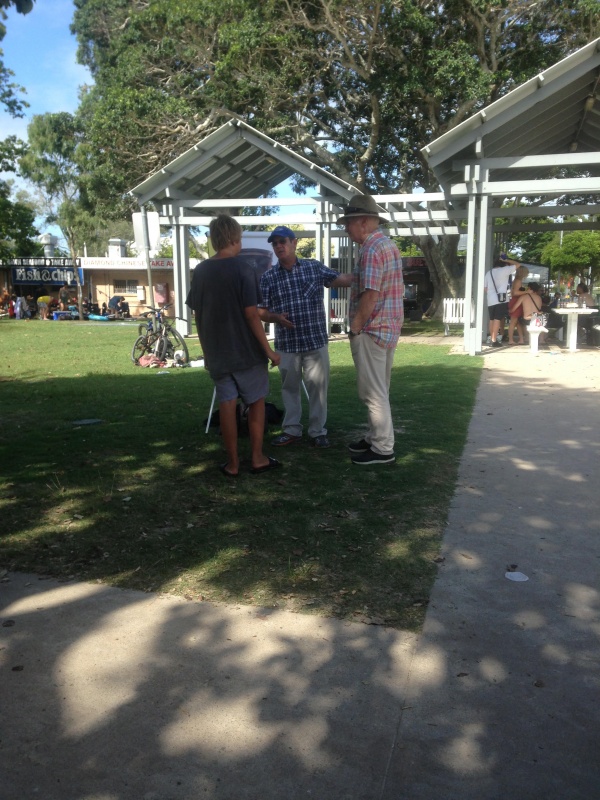