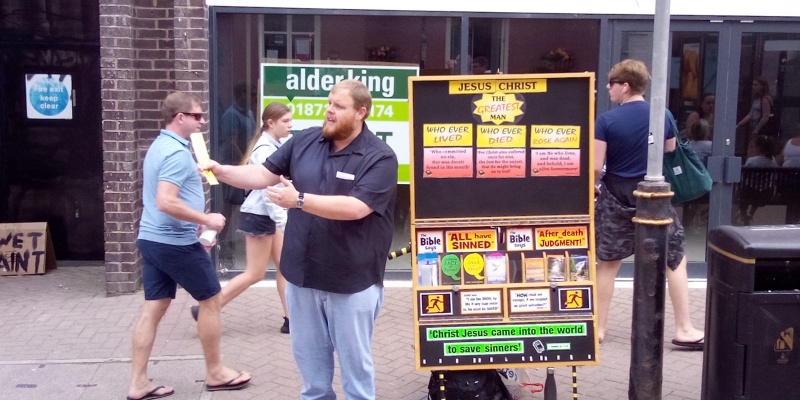 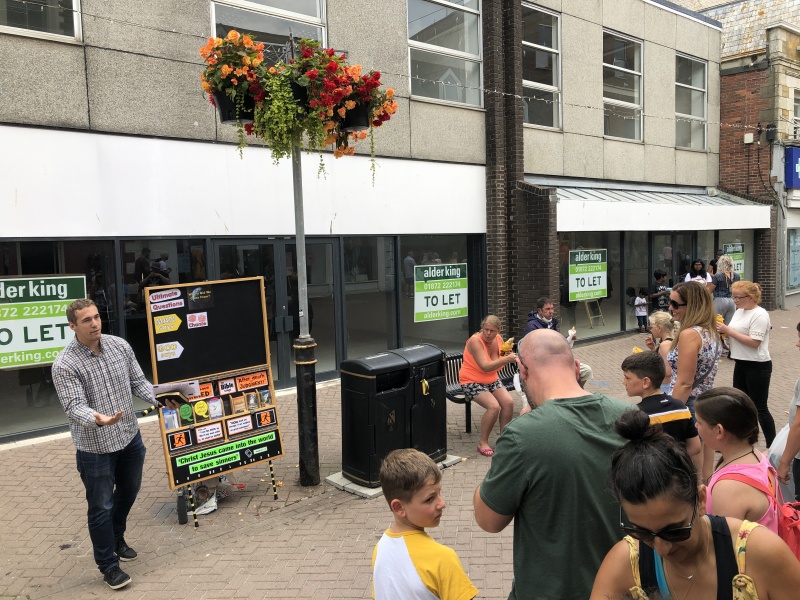 How can I describe what Newquay is like during this summer months? Our normally quiet streets are overflowing with masses of humanity from all different backgrounds, contexts and beliefs. At this time of year all of the UK seems to make its way down to the Cornish Coast in order to enjoy a nice holiday. For us this means we are in a strategic location which, if evangelised well, has the potential to impact the entire United Kingdom.

Our outreach commenced with a time of prayer at Newquay Baptist Church as without prayer our evangelism will be futile. We need the Lord to show His mercy, so we asked that the Father would draw many to the Lord Jesus Christ.

At around 1pm we made our way down to the High Street and as was expected we were greeted by crowds of people. The challenge we now face was where we should set up for our open-air meeting, but the Lord had gone before us and in His providence He had arranged for a street stall to pack up and move as we approached.

As Nigel and George of the Faith Mission set up the open-air board, I commenced handing out tracts. Nearly straight away I was engaged in a conversation with a lovely older lady who professed to be a Christian. The concern for me was that she attends a liberal and pro-LGBT Church of England congregation here in Newquay; whenever I hear of someone going to a gospel-denying church I have to wonder about their conversion. As we chatted it became clear that this lady had a grasp of the gospel, but it still wasn’t clear why she attended such a church; eventually I discovered that she had been hurt by other churches, but at the Church of England she found friendship. It should rebuke us to know that the Christ-deniers seem to be friendlier than those who profess to love Jesus; may Christ forgive us for the times that we as evangelicals have failed to love one another. This lady and I had a good chat, and she took the details of our church and also a tract on true and false conversion.

By this stage the open-air board had been set up, so I decided to do something which I have never done before - I used George’s board to preach the gospel. This board was designed by the Open-Air Mission and it contains a magnetic backboard and tract holder; the way the board is used is that the preacher puts up quotes and Bible verses while he preaches, thus enabling people to hear and see the gospel.

My message focused on the question of “Who is Jesus?” I used Matthew 16:13 as my text, and from there I began to show how Jesus is the greatest man who ever lived, died and rose again. The open-air seems to have gone well, and this method of preaching is something I would like to try again.

Today there was a sense of a hardness in Newquay, which made the preaching and the one to ones difficult; for instance after I finished preaching, an elderly man took a tract off Nigel then ripped it up. As he walked by me I said to him, “Sir, may the Lord grant you repentance and faith for tearing up the gospel; one day you will stand before God and give an account of your actions.” The man seemed rather shocked and taken aback, I pray that this one line warning would be used by the Holy Spirit to convict the elderly man and bring him to repentance.

It now came time for George to preach; his message this week focused on “Ultimate Questions”, which included queries such as "Where did life come from?” As George preached he would put on the board what man thinks and what God says. As he did this I noticed a family listening to the preaching, the father was clearly opposed to the gospel, but his young son turned him and said, “Dad, I think the answer is what God says.” Truly the young child speaks the truth!

While all this was going on an elderly lady walked past mocking the gospel, I decided that I would challenge her on that so I asked her, “Why don’t you believe?” Well that question opened up a floodgate! The lady told me that she is a former Roman Catholic but now doesn’t believe in any religion. She went on to list all of her good works and how if God is real He would be happy to have her in Heaven because she is such a good person who never does any wrong. It was then that I said something which I don’t normally say, I said, “You are an older lady, so I will speak to you directly and with respect as I would my own grandmother, but you are self-righteous and the moment you close your eyes in death it won’t be Heaven where you are going, it will be Hell.”

The lady seemed taken aback (I must admit I was shocked I spoke so directly), but once again she began to list all her good works and deeds; again I took her back to self-righteousness and how efforts do nothing to save. This elderly lady had the false teaching of Rome jammed down her throat, and even though she had abandoned Romanism she still had the doctrine of antichrist in her thinking. The more she stressed her works, the more I stressed that her works would damn. I should make clear that this conversation even though it was direct all took place in calm and conversational tones, as I listened to this elderly lady my heart was breaking as I realised that she was in the final hours of life, yet here she was waving her fist at God.

The lady was clearly angry at Romanism (I join with her in denouncing that evil system), but instead of looking at what the Bible says, she kept holding onto the lies she had been taught. After talking for awhile she asked, “If God is loving why the world so bad?” I answered by saying God isn’t to blame for the world being the way it is, rather we are to blame because humanity sinned. When I spoke of sin she went back to her self-righteous ways by talking about how good she is and how she has been married to the same man for sixty years. I commended her for her marital faithfulness, but pointed out that won’t help her when she stood before Jesus. I explained the gospel to her, and called on her to trust in Jesus, but she refused. I asked her, “Are you saying no to God’s love and compassion today?” She looked at me and said, “I’m saying no to Jesus!”

The elderly lady told me she is 80 years old and that in her life she has never seen God do anything good. I looked at her and said, “God causes it to rain, He causes the crops to grow, He causes you to have life, He causes you to have the air within your lungs, He gave you a good husband for sixty years - every good gift comes down from our Heavenly Father. How can you say God hasn’t done anything good?” It was at this point a softening and change occurred, the lady looked at me and said, “How can I be right with God, I am too old to bow and do all the things Roman Catholicism said I have to do.” I stressed to her that God doesn’t look on the externals rather He looks upon the heart; I once again explained the gospel and called on her to repent and trust in Jesus. As I spoke to this lady I majored on the love of God for sinful people and His amazing kindness; I then asked her, “You are old enough to be my grandmother, would you take a gift from me as if I was a grandson giving you something?” She said she would, so I offered her the Gospel of John. She took the Gospel willingly saying that she had read it before and she liked that book. She assured me that she would read it so that she could understand God’s love more.

This elderly lady’s name is Shelia - I told her that I would be praying for her (and I hope you will too); she said she would appreciate all the prayers she can get. May Shelia no longer say no to Jesus, may she instead come to Him in humble repentance and faith.

While all this was happening, George had finished preaching and Ian was locked in a good conversation with a gentleman on an electric scooter. It was this point we realised the outreach time was nearly gone, so Nigel finished the day off by preaching about God’s love in the gospel.

Even though it felt hard today, we rejoice in the knowledge that our God changes hard hearts. Please join us in praying for all those we encountered. 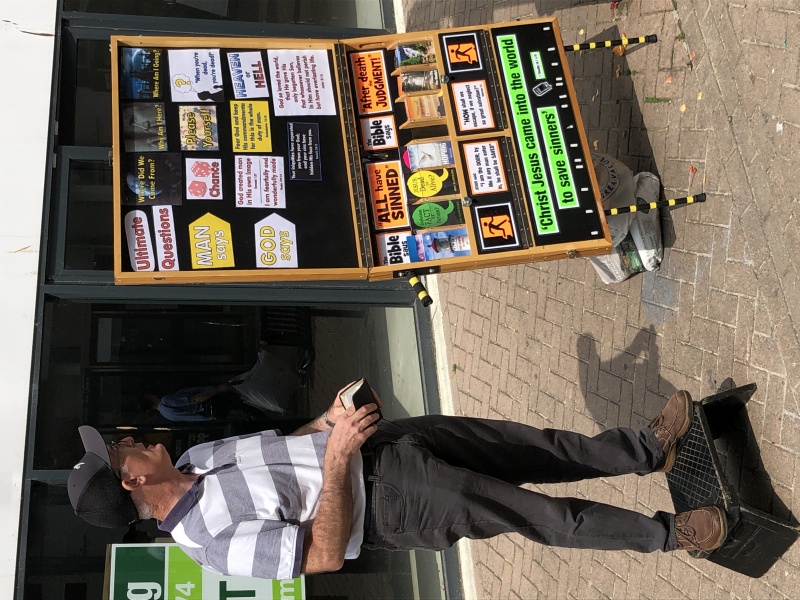 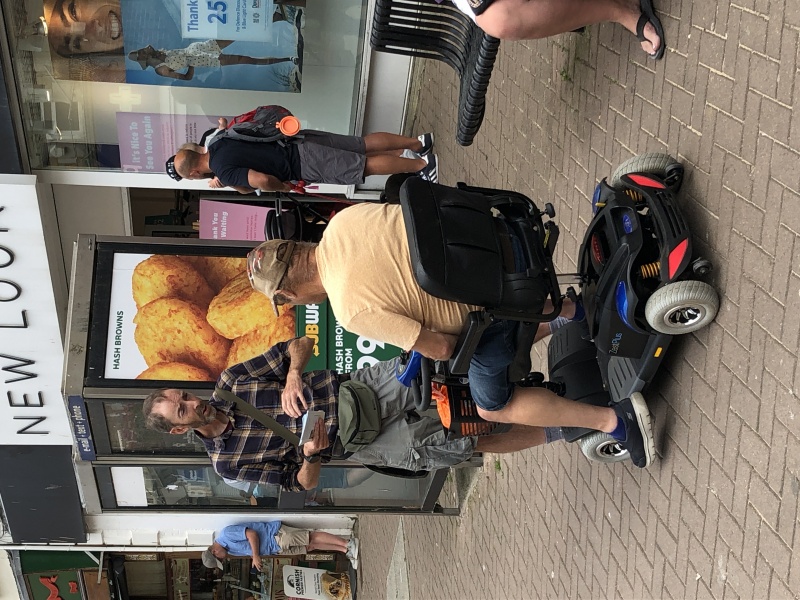