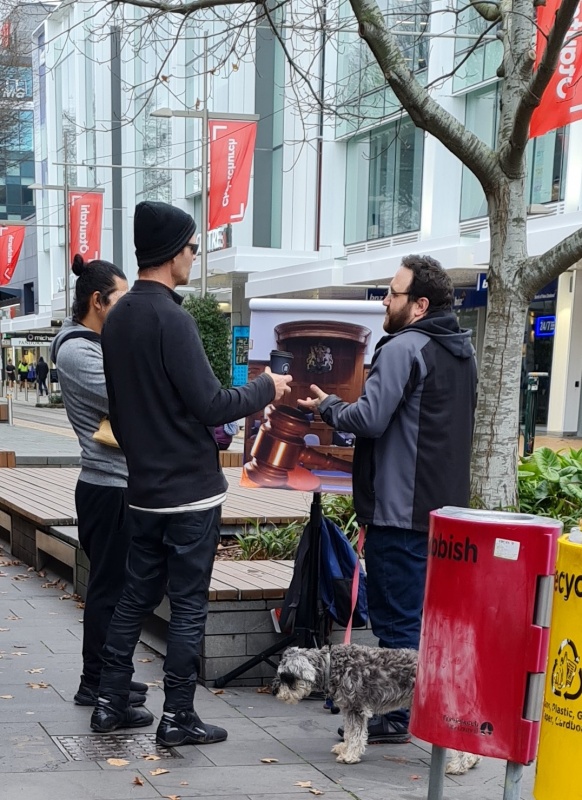 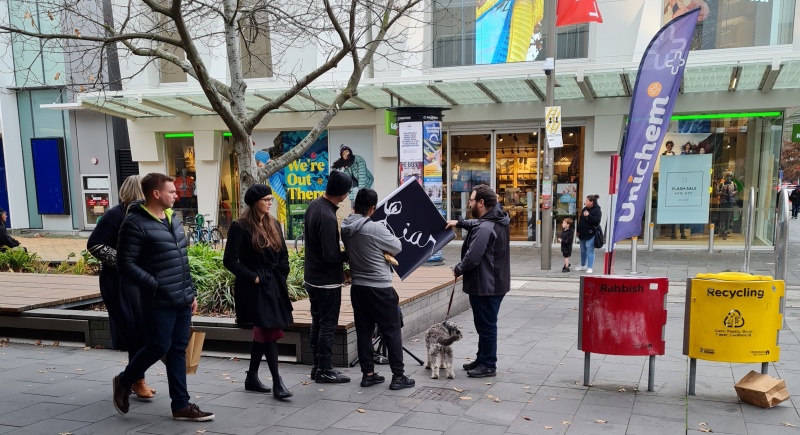 There was some rain about today, but it was clear enough to head on the streets after lunch.  A team of three.  A bit of a slow start, but it became quite a busy outreach.

I had some great opportunities to talk to groups of kids in one go - 3 groups in fact.

Interestingly, one of those groups was made of some young Muslim guys.  I wasn’t able to hold all their attention, and so they started peeling off and leaving.  I ended up with two of them, only one seemed interested - and then they had to go.  They were trusting in their good deeds for salvation.

Well, the next group was made of some young Christian guys.  Sadly, they were trusting in their good deeds for salvation (“don’t sin”).  They stayed to hear the gospel - which is great.

The third group was a mix of non-religious guys and girls.  The conversation started with only two stopping, then it was only one, but then the other guy came back, and all the girls joined in as well.  It was a wonderful gospel conversation.  Praise God.

I had some other encouragement today as well.  In my last report I mentioned a guy who heard the open air preaching on Friday, and then I was able to follow up with a one to one gospel conversation.  Well, he turned up at church today!  It was wonderful to be able to welcome him into the meeting, and sit with him.  He joined the discussion afterwards too and was invited to a weekly Bible study.  Praise God!  May he continue to respond to discipleship and bring much glory to God.

Later I was online with the team.  Here is a remembered transcript from one of those conversations:

Me: What do you think happens after you die?
Them: You really want to know what I think?
Me: Of course.
Them: (laughing) Good people become goldfish, and bad people become dogs. [!?]
Me: Ok, where do goldfish come from?
Them: Pet Shops
Me: Where do pet shops come from?
Them: Well, God made the pet shops...
Me: So you believe in God then?
Them: No!
Me: Well, you said God made pet shops.
Them: Are you trying to convert me to Christianity?
Me: Yes.
Them: Well, I’m gay.
Me: Well, there is hope for you.
Disconnect.

So it was an odd conversation, I admit.  But my heart goes out to this person.  I hope they will get to hear the gospel.  Maybe from you?  Are you ready to share the gospel?  Get equipped!  Talk to your Pastors to learn more, or get in touch.

Other online conversations of the weekend included:

A conversation with some young guys obviously up to no good.  As soon as the one holding the phone heard my question he was instantly engaged.  But another of the kids was saying, “skip him” and trying to snatch the phone so he could do so.  But the kid with the phone wouldn’t let it go, and I was able to share most of the gospel with them.  I made it up to the way we accept the gift: trust when the skip finally occurred.  But I was able to inform them of needGod.net before it occurred.

A wonderful chat with a kid from the Philippines.  He said he was going to skip me as soon as he saw me, but my question made him pause.  He is now professing faith in Christ.  I was able to help him download a Bible app on his phone and get him set for reading John.  He is in touch via Instagram.

A chat with a kid who obviously had a Christian background (Walk by Faith sign on his wall).  But who thought going to church many times would get you to heaven.  He came to grasp the gospel.  I pointed him to his parents to discuss further.

Thank you Lord for giving us another weekend of your patience to proclaim your mercy.  Glory to you alone.