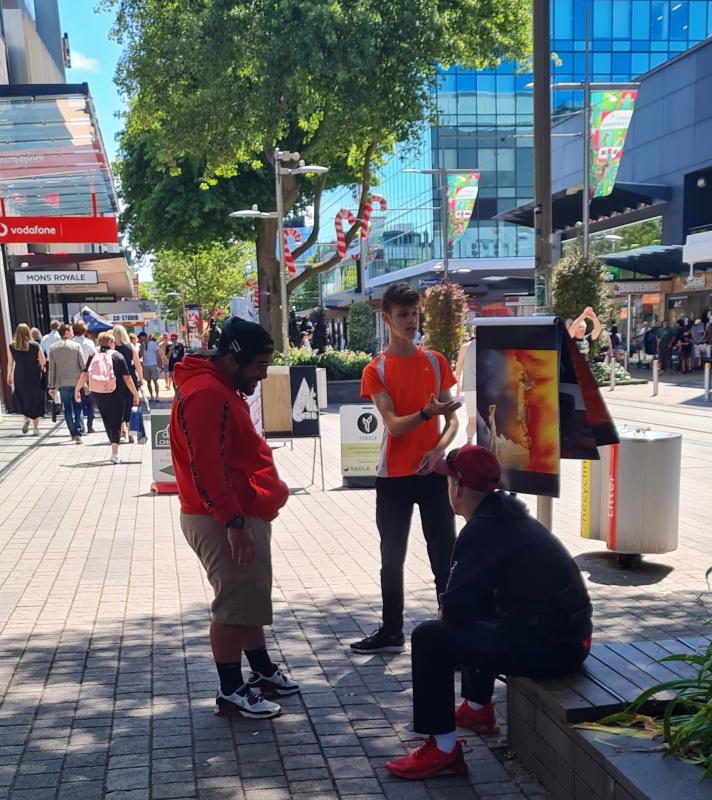 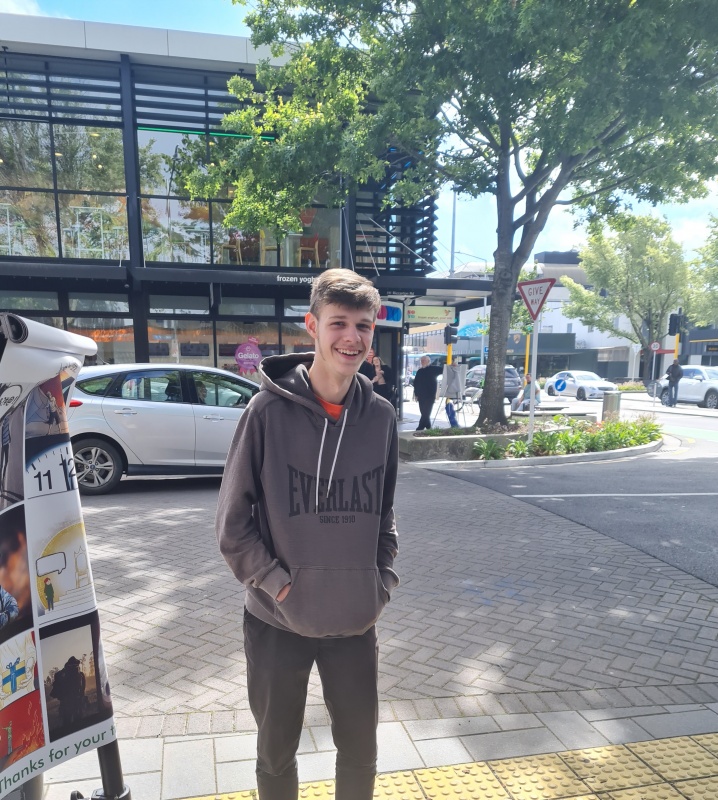 The street outreaches for the week were in hot summer weather.  Tuesday and Saturday in Riccarton, and Friday in the City.  I took Sunday off.

It was so good to have Caleb with me on Tuesday and Friday.  Caleb (pictured) has applied to come on the Philippines trip in March next year and is joining me so we can get to know each other better, and to get skilled up in preparation.  Roger was also with us on Tuesday.

Much of my time on the Tuesday outreach was spent in getting Caleb up to speed on the way we share the gospel on the street, via the flip chart.  But, near the end of the outreach I had an opportunity to share the gospel with 3 people going past.  I wanted to use the flip chart, so that Caleb would get a chance to get involved and to see how it works in action.  But I could sense that these 3 people could bolt at the slightest distraction, and so I had to minister while I had their attention.  At the start of the chat, one of the key reasons they didn’t believe God is real is that they couldn’t reconcile the existence of God with evil in the universe.  So, I gave the biblical answer, found in Romans 9:22-23 (and elsewhere in the bible): God not only allows evil, but decrees that it will occur without ever doing evil himself so that he can demonstrate 3 things about himself for his glory.  Without evil people, he can’t demonstrate his: justice, mercy and patience (in holding off justice so mercy can be received).  Now, this answer has to be delivered with a large dose of compassion.  But, in this situation, I could see the light of understanding come into the eyes of all 3 of them, it opened them up and I was able to clearly minister the law and the gospel into their lives, and plead with them to accept the mercy of God found only in the sacrifice of Jesus.  I was really encouraged by the conversation.

Friday’s outreach was in muggy weather.  It had been raining, but during the outreach the sun came out.  Caleb and I set up the flip chart down Cashel Mall.  It was a very busy outreach!  I think lots of people were out with Christmas shopping.

People I wouldn’t normally expect were stopping to chat.  Many were attracted by the flip chart.

I had a couple of guys come to argue with me on the existence of God, they didn’t seem to get what they expected, which was someone with no answers.  They were challenged, but sadly doubled down on their resistance and moved on without hearing the good news.

I had a lady stop to engage.  I sensed she would bolt at any moment, and yet, at the same time, she was very engaged.  I started out with a summary of the law / gospel, and the longer she stayed, the deeper the explanations went.  She is from Auckland, and there had been a hellfire preacher up there that had put her off.  And yet, she came to talk to me knowing I’m a Christian.  Maybe the hellfire preacher had pricked her conscience?  I explained hell, in the context of God’s mercy.

I was keen for Caleb to get into his own chat, and so I got one started, passed it to him, and then stepped away.  It was so good watching him engage, and hold the attention of the two guys.  Well done Caleb!

Saturday was busy.  I talked to a universalist who slid slightly by the end of the chat.

But the stand out chat in my memory was with a couple.  She approached me on her own.  Her husband had recently become a Christian, and she was still trying to process the world view change.  Her husband came and joined the chat, and it was so encouraging to hear his explanation of the gospel!  He has been studying the Bible intensely, is involved with a good local church, and is listening to good teachers.  His understanding of the gospel is flawless.  I was so encouraged to actually see the fruit of the Holy Spirit working in the life of a new believer!  My prayer is that the Holy Spirit would illuminate the gospel in the heart of his wife.  My God bless this young couple!