There were no Mormon missionaries to be seen at all on Thursday during our Sunnybank outreach. That is good news in that thankfully they were not able to spread their false message, but it also meant we weren't able to continue witnessing to any of them, including the one who last week revealed to us he doesn't believe the Book of Mormon is true. We will hopefully see him another week.

When I arrived I started handing out tracts as I crossed the bridge. And one young lady I handed a tract to came up to me only about half a minute after I gave her tract, and she wanted to give the tract back to me.

So I started a conversation with her asking whether she thought she'd go to Heaven. She was a firm believer in reincarnation. 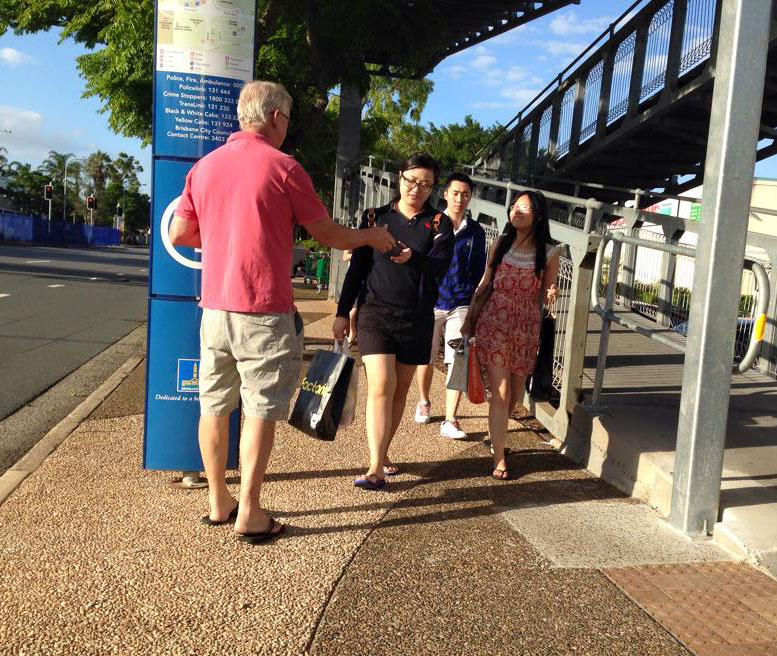 She said, "But you could turn into an animal too." I pointed out that that doesn't help her case, as there are more animals on this Earth right now than there ever has been, because humans are mass-breeding them for food.

I said, "Since we both haven't died yet, it would make more sense to believe the words of one who has died and rose from the dead three days later, and that is Jesus. Jesus says it is Heaven and Hell after we die."

She conceded the point and so I went through the law of God, talked about the judgement to come and she said she was terrified of ending up in Hell. She thought stopping her sins would save her, but I pointed out that doing that won't get rid of the history of her sins.

So I explained how the only way to be saved is by having a perfect person take the punishment for us on our behalf, that is Jesus. At this point she exclaimed, "No one has ever explained this to me before! It makes sense."

By this time, it had already begun to rain but she didn't care, she just wanted to learn more. She said she would download the Bible on her phone (for she didn't want to have one made of paper) and she said she would seriously think about trusting in Christ after counting the cost. Her name is Helen.

Col arrived a bit later in the afternoon and was able to hand out lots of gospel tracts to people as they got off the bus.

Some more people to pray for whom we talked to:

• Ivy - a Buddhist, after hearing the full message and my challenge to her of when will she come to trust in Christ for her salvation, she said "This is a very big. I will need several days to think about this. It is really big."

• Victor - Goes to a Catholic Church. Had no idea of gospel. Said he would repent and believe the gospel. Encouraged him to then start reading his Bible daily and to check everything he hears about God with the Bible.

Just a team of two today, but the people we spoke to and those who received tracts will never be the same in eternity! 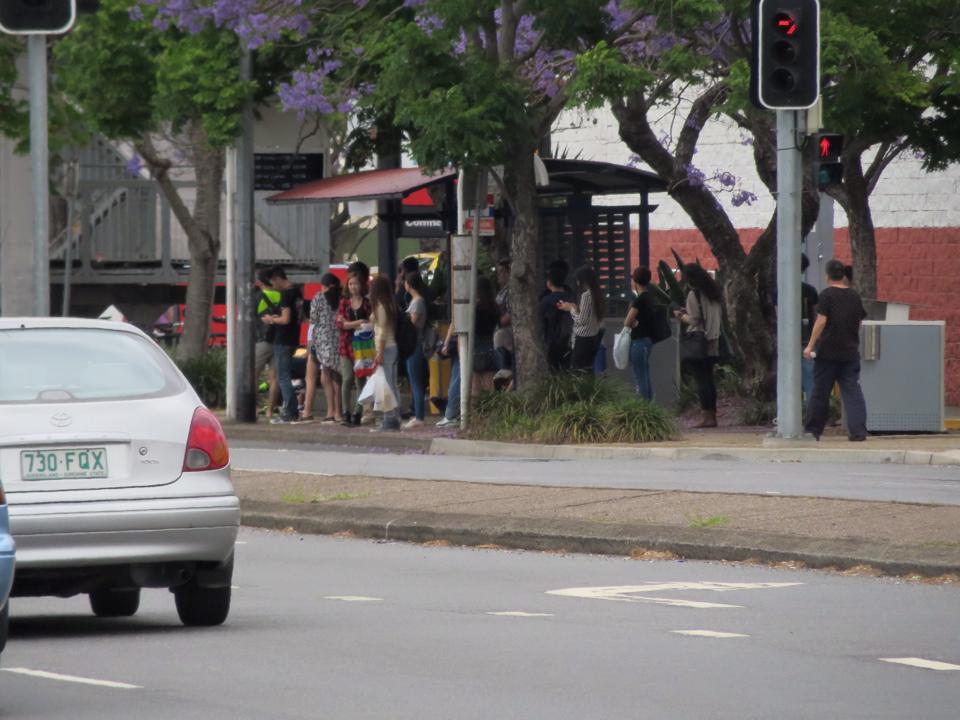 Some encouraging conversations with people yesterday at Sunnybank.

Our team member, Col, spoke to one of new Mormon missionaries that were just recently transferred to Sunnybank.

Col asked the question to him, "What happens if you sin?" The Mormon missionary responded with a whole list of tasks that he must do to be forgiven. Col pointed out that if that were so, it is works that saves him and not grace through faith as the Bible says. Col then showed him Ephesians 2:8-9.

That passage came as a surprise to the Mormon and said to Col, "Can I tell you something...but don't tell the other Mormon missionaries. I don't know if the Book of Mormon is true. I know the Bible is, so I now basically only read the Bible."

We hope to continue the conversation with him next week. Please pray that this Mormon missionary comes to understand the gospel and subsequently leaves the Mormon Church.

Also, another good conversation that was had was with a young lady named Adriana. She is Muslim, but she said that she is not practicing it very much. She knew she was going to Hell, but she thought that if she simply prays for forgiveness and stops sinning she will go to Heaven.

I explained that even if she managed to do that, because God is just, He could not overlook the history of all her sin. So I explained that she needs a perfect substitute who can take the punishment for her on her behalf, and that it is Jesus.

After explaining about the cross and forgiveness through faith in Christ alone, and that He is God, she said that this is completely new to her. She had always been taught Jesus is just a messenger.

She saw the high cost of leaving her religion, for her whole family is Muslim too. She was seriously considering what to do. She ignored the fact that her bus came and went, because she wanted to learn more.

I gave her a gospel of John, and answered many of the questions she had. I also warned her about the Mormons - that they are not Christians and that their religion is similar to Islam in that instead of just having one extra book that contradicts the Bible, they have three!

I also stressed with her that anything she hears about God, to always check it with the Bible. Please pray that God brings her to salvation.

One last person to pray for is Michael. He is non-religious but heard the whole gospel presentation and he said he would think about it.

Sharing the gospel is never in vain! Glory to God! 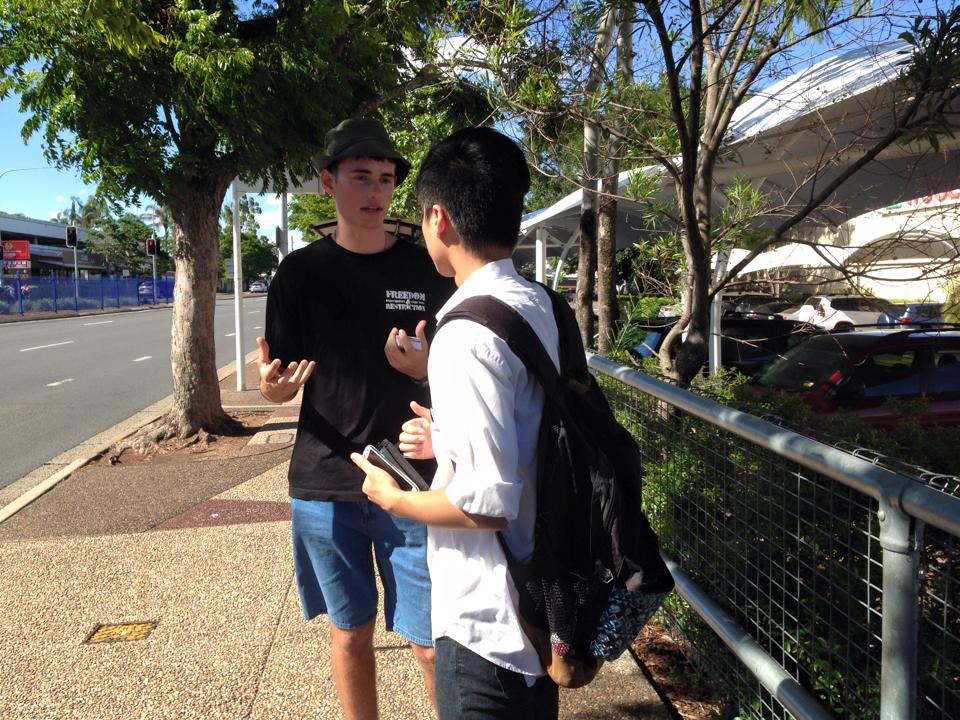 It was hot today as the team met at Sunnybank to share the gospel.

The first thing I noticed was that there were a new bunch of Mormon missionaries around the place. That meant, different Mormons to witness to.

There were four of us today at Sunnybank, including a new team member. We are always praying for more labourers, so this is an answer to prayer!

Here are a few names to pray for:

• Riccardo - initially he said he didn't know whether God existed or not. He quickly came to affirm God's existence after the simple building builder, creation creator analogy.

He then asked whether Jesus was black or white. I said neither, as he was Middle Eastern. He was shocked to hear me say that, and he said now I want to hear what you have to say because apparently everyone else he has asked the question to in the past has got it wrong.

I went through the law and gospel with him, and explained the cost of following Jesus. He said he does enjoy his sin, but will seriously consider the message.

He said he had been thinking about eternal matters for the past 3-4 days. He said he sees this conversation as a sign from God. I gave him a New Testament and he said he would start reading it everyday.

• Johan - goes to church, thinks that it saves him. He looked bothered after hearing the gospel.

Please pray also for all the Mormon missionaries who we were able to share the truth with today. Praise God that He can convert anyone and that His word never returns void! 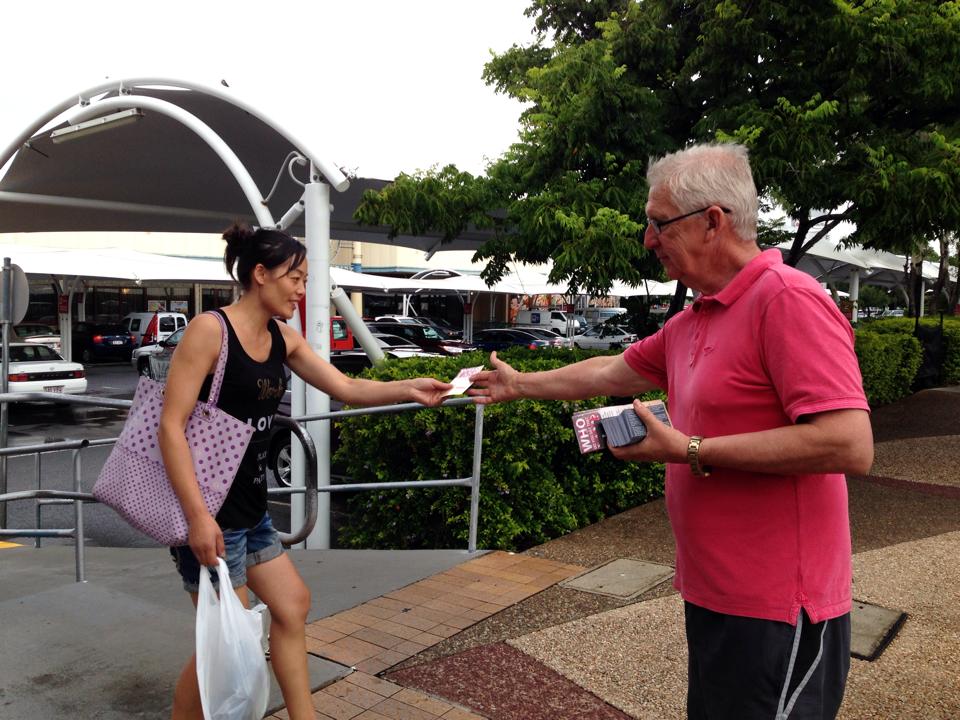 It was a good afternoon of outreach at Sunnybank yesterday.

The Mormon missionaries were out in force in the area and they mentioned that they are about to be transferred to a different area. This means a new bunch will be coming to Sunnybank soon.

So I tried one last attempt of witnessing to one of them who I haven't spoken to much before. He was advocating that there are at least 3 different gods that exist - the Father, the Son and the Holy Spirit.

I asked, why then in the Great Commission in Matthew 28:19 does Jesus say "...baptizing them in the name of the Father and of the Son and of the Holy Spirit"

'Name' is singular, not plural. That means the Father, Son and Holy Spirit are not 3 separate beings, but the one being, existing in 3 distinct persons.

The Mormon elder had no idea how to respond and went to their usual, 'But I have received a feeling that Mormonism is true'.

I explained that feelings are not the way we know that something is true, for the Bible says our heart is deceitfully wicked. Instead we should follow the example of the Bereans who searched in the Scriptures daily to see whether what was being said by Paul was true (Acts 17:11).

Please pray for Elder Reading, that God would save him out of the Mormon church and bring him to saving faith.

Please also pray for a Buddhist man named Elvin. After hearing the message, he thought at first he could add Christianity on to his existing beliefs. When I quoted Jesus saying that He is the only way, Elvin knew he had to make a choice - Buddhism or Christianity.

He said he would seriously think about what he heard. I gave him a gospel of John to read.

The seeds have been sown, our job is done for now, the results are in God's hands. To God be the glory! 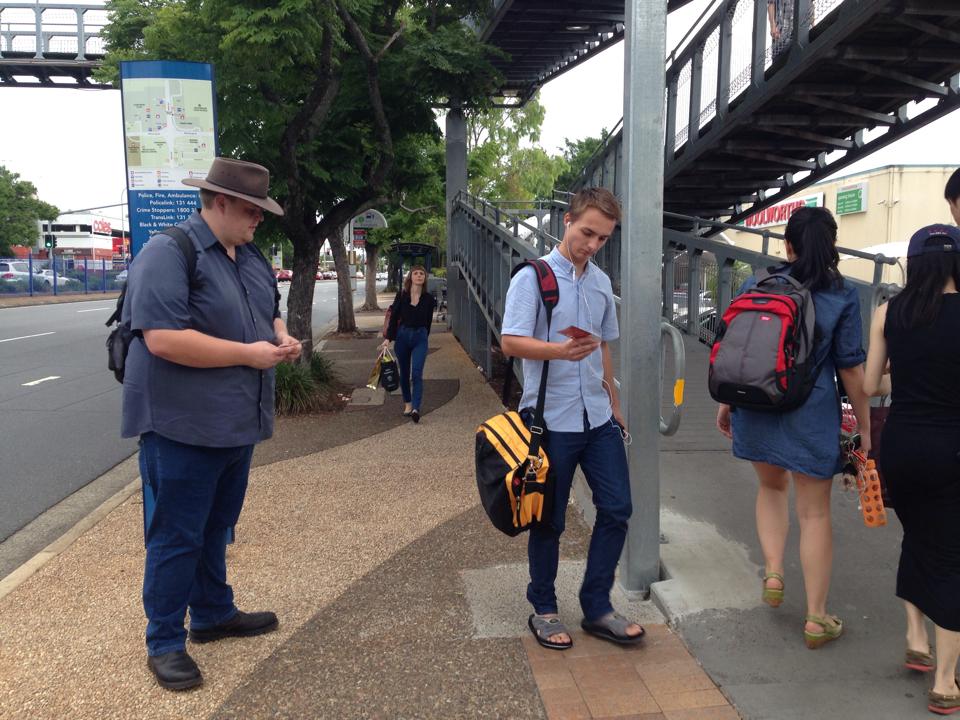 It was a great afternoon of evangelism in Sunnybank today. Quite a number of tracts in Chinese and English were able to be handed out.

Please pray for a Mormon elder who we have been talking with occasionally at Sunnybank. We first met him at the Gold Coast in February.

Today he said he has some big doubts about Mormonism, but said that his pride is stopping him from leaving the Mormon church. And also because he loves the LDS idea of eternal marriage so much that he wants to cling to the hope that that is true despite Jesus saying there is no marriage in Heaven.

You can tell he is thinking through the things we have been saying to him. Please pray for his salvation

The rain was heavy and constant today during our Sunnybank outreach. But it meant people would congregate under the rain shelters, which provided a great opportunity to talk to many people.

Mostly the people we spoke to today were from overseas, from countries such as China, Vietnam, and Korea. They had never heard anything about Christianity before, and after hearing the gospel, they wanted to know more, so we gave each of them a Bible.

Eight Bibles and many gospel tracts were given out today.

Praise God for another great outreach at Sunnybank today.

One of the good conversations we had was with a young man who is in high school named Aditya. He said he doesn't believe in God and never has.

After a quick apologetic of pointing to the creation (which shows to us there is a creator), he realised that God does exist. And as we going through the law and speaking about the judgment to come, he thought that if he simply stops his sin that will get him into Heaven. I pointed out that stopping his sin won't get rid of the history of it. I then explained he needed a perfect substitute who could take his punishment for him, Jesus.

After explaining about faith in Christ and the subsequent desire to turn from sin and live for Jesus, he said "I want to do that now". I asked a few checking questions to make sure he understood grace - that there is no amount of works he could do to save himself. He did understand. He did not have a Bible so I gave him one and he said he would start reading it everyday.

He closed with "No one has ever explained it that way before. Thank you so much."

Please pray for him.