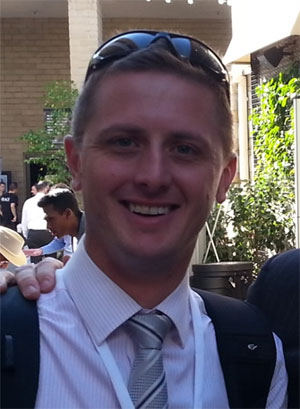 I grew up as an atheist who regularly fought against Christianity and other religions. In 2002, God graciously allowed me to experience severe depression which was ultimately the catalyst that caused me to question my lack of belief in God, which ultimately resulted in my eventual conversion.

During this season of severe depression in 2001-2002, God brought a couple of individuals into my life who challenged my belief that there was not a God. Though I had heard these sorts of assertions many times before, their assertion of God’s existence became embedded in my head frustrating me. I decided the best way to rid myself of this nagging thought was to disprove God's existence once and for all. My logic was that the Christians claimed God wanted to be found, and so I “challenged God” to prove his existence. God did not manifest his presence to me in response to my childish demands, but rather removed the weight of depression within days, even though it had oppressed me for many months. This was both humbling and humiliating for me as an atheist and I was forced to acknowledge the existence of a “greater force”.

This began a season of seeking answers with a new found openness. For the first time, I was willing to actually hear explanations for my objections against the Bible. Through a friend, God brought a pastor into my life who patiently took the time to slowly work through my objections and explain life of Jesus and the message of the Gospel to me. He gave me a New Testament which for “some reason” I could not put down.

After a time, I could no longer fault the Bible’s truth and authority, and found myself in a place where I had to submit to its teachings. I agreed with it when it stated that I was a wicked sinner in need of a saviour, that Jesus had died for my sins and that I had to repent and trust in him. I turned to Jesus, forsaking my life of sin and was converted in approximately September 2002.

My conversion created an urge to share my faith as well as a desire to flee from sins which were normal parts of my prior existence. As with most people, this was a process but there were also times when God worked rapidly on some particular sins. Though God has granted me great victory in some of these areas of sin, the daily battles also continue and will until I see Him face to face.

In early 2004 God allowed me to lead a young lady to Christ who would eventually become my wife, and in 2007, as very young Christians, we charged into the local mission field to share Jesus with anyone who would listen.

Andrew now serves as a full-time staff evangelist with OAC Ministries in Queensland where he partners with Operation 513 on a weekly basis to preach the gospel throughout South-East Queensland.