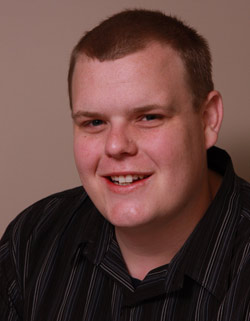 Josh Williamson was born into a Christian family on February 2, 1986. He was brought up in a Christian home, but was not converted till November 10, 2002.

Within six months Josh Williamson was in Bible College studying for a Diploma in Christian Ministry. During this time of study Josh was first placed into a ministry role as a youth bible study leader. It soon became apparent that Josh's heart was set on telling the lost about the Love of God found in the sacrifice of the Lord Jesus Christ.

As a second year Bible college student, Josh Williamson was asked to preach in the chapel. His text was from Matthew 5:13-16 and the purpose of the message was to encourage the Saints to evangelize. After the service he was approached by a first year student and asked if he had heard of Ray Comfort, Josh had not heard of Ray Comfort so this student gave Josh a copy of "Hell's Best Kept Secret". This audio changed Josh's life in regards to evangelism. It gave him the tools and training needed to evangelize with more effectiveness.

In mid-2004 Josh Williamson began his evangelistic ministry on the Gold Coast (Australia), at first he only handed out tracts, and witnessed one to one. As he evangelized he noticed that many Australians had no knowledge or understanding of the Gospel of Grace. This spurred him on to evangelize all the more, and in November 2004 he began to hold street meetings in the Queen Street Mall in Brisbane (Australia).

2005 proved to be a busy year in the ministry of Josh Williamson. Early in the year he was approached by an evangelistic ministry in the USA to become a local evangelism leader in Brisbane. This connection with 'The Great News Network' (GNN) provided Josh with his first opportunity to travel overseas to preach the Gospel.

Since that first overseas outreach, Josh Williamson has ministered through-out Australia, New Zealand, the United States of America, and England. His passion is to see the lost saved all around the world, and to also equip Christians to an effective witness.

Josh Williamson has finished his studies at the Queensland Baptist College of Ministries (Malyon College), achieving a Bachelor of Ministry. In 2012, he and his wife decided to move to the UK to become missionaries there. A few years later he returned to Australia where he continues to serve.

Listen to Josh Williamson's Testimony (from 2008)