Another Sunday afternoon had already arrived. Soon Josh Mitchell and myself were cruising down the gold coast highway. We picked up Josh Williamson who joined us for the afternoon. I really love hanging out with both Josh's - their passion for God's glory and the way they boldly declare the truth whatever the cost is a real testimony of God's grace working in their lives - and a challenge to me! 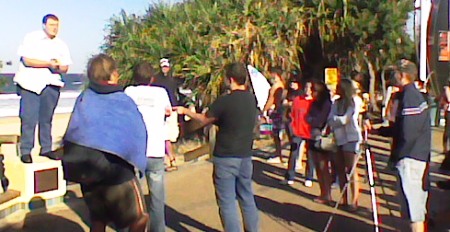 As we approached the beach front at Surfers Paradise (Cavill ave) we knew that we were up for another very windy day. We decided to bring the bible table - but later discovered that the bibles and gospel tracts would have probably flew everywhere (likely never to be seen again).

It was great to see Tim, and some of the guys and gals from Helensvale Baptist church. We prayed together at the tables nearby and then quickly set-up (I got to test out my new camera-tripod - it proved very handy). Josh Mitchell got up to preach first. He did well to preach audibly and clearly in such windy conditions ... he also did a fantastic job of interacting with a number of people watching on. It was clear that quite a number of people were interested as they came over to hear the message that Josh was preaching. 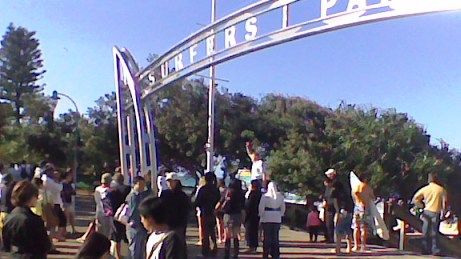 Josh Williamson got up to preach as well and had no trouble preaching over the wind. He had a lengthy debate with some guys who seemed to be trying to push their point that Science is incompatible with religion, but they seemed rather confused and often when Josh handled an objection that they put forth, they would quickly change the question. Josh was fantastic in reasoning well, patiently and in an engaging manner with them - quite a crowd accumulated. Josh ended strong with a clear gospel presentation urging people to repent and put their hope and trust in Jesus alone.

After we had finished I asked a few guys who were still hanging around what they thought. One guy said that he thought Josh Williamson was using too much sarcasm. The others had questions as well which I attempted to clarify for them. I assured them that the main thing in all of what we do is the Gospel - not a watered down gospel which pleases people - but the true gospel revealed in God's word.I also thought it would be helpful to 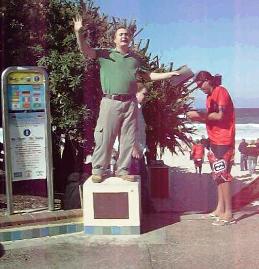 let them know why we don't just preach 'the nice guy' approach. Basically I shared with them how important and urgent the message of the gospel is - and that nobody listens to the 'nice guy' who is always polite and seeks above all to not offend anybody - they are usually just incredibly boring, and nobody pays any attention.

Ultimately, we want as many people to know the truth because God uses the truth to set people free (John 8:32).

2 Cor. 4:2 (ESV) But we have renounced disgraceful, underhanded ways. We refuse to practice cunning or to tamper with God's word, but by the open statement of the truth we would commend ourselves to every one's conscience in the sight of God.