My body was aching all over as I awoke today, and every part of me screamed that I needed a rest. Instantly I began to think up excuses in regards to why I could have the night off from witnessing. But I am bound to preach the gospel of Christ, so I began to prepare for the nights outreach.
The city seemed fairly quiet when I arrived at 7:30pm, and I thought maybe it would be a nice and calm night. Yet, every time I think that it always goes the other way. We rallied in King George Square, and as we waited for more team members to arrive, we saw a large group of people with Bibles. 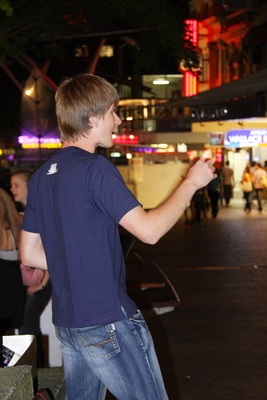 This was not surprising since many churches come out witnessing at Easter time, most of them don’t do it at any other time, but only at Easter or Christmas. As they prayed it soon became apparent that they were a Pentecostal group, and before we could engage any of them they had walked off. There outreach for the night was to have a man dressed up as Jesus and a couple of Roman soldiers walking through the Queens Street Mall. As they beat the man carrying the cross people would call out scripture passages.

They walked right by us while we were setting up for the night, so Ryan quickly took advantage of the situation and began to preach. He spoke on the cross of Christ and why He had to come and die. This then led into explaining the depth of sin and human depravity.

A crowd formed quickly and began to heckle, Ryan held his own for about twenty minutes, and then tagged me in. I begun to engage hecklers, at this stage I had five hecklers, so I started to try and bring some order to the chaos. One of the hecklers was an atheist, another a Buddhist, another was a Hindu. The Hindu man was very vocal and kept yelling questions at me, but he would not let me answer. So I asked him in front of the crowd “Will you let me answer?” His reply “NO!” Then he started accusing me of not answering his question. The crowd soon became annoyed at him and started yelling for him to let me answer the question. After awhile of him not letting me answer his question I moved on to deal with Atheism. 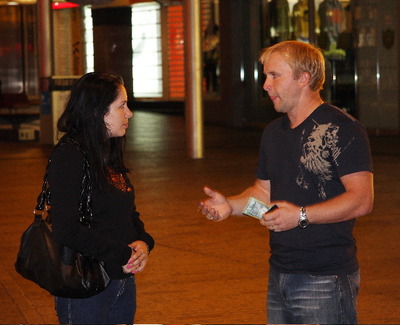 While I was dealing with some proofs for the evidence of God, and man and a woman pushed to the front of the crowd. The woman grabbed my hand and tried to place it on a ‘red’ area of her body, I kept pulling up my hand and she stated that she respects what I was doing. She then asked some questions in regards to God. While I was answering a man of Indian descent walked in an grabbed her, and then tried to twist her arm behind her back. I called on him to let go, and to cease assaulting her, he refused, but he soon realised that I was not going to let the issue drop. He eventually let go, and I refused to answer any of his questions since it is not right for a man to assault a woman.

The crowd kept on calling out questions so I did my best to answer their questions, then entered Mr. Walking Dawkins, who when he heckled would quote Richard Dawkins and then walk around the crowd mocking Christians. I think it was clear to the crowd that his questions had not basis, and it wasn’t hard to respond. Eventually he left and the crowd continued to call out questions. The time was now about 11:30pm and I had been up for over two hours, so I began to bring it to a wrap up. It was then that two young ladies approached and began to ask questions in regards to salvation. I began by explaining our need of a Saviour. It was then that Mr. 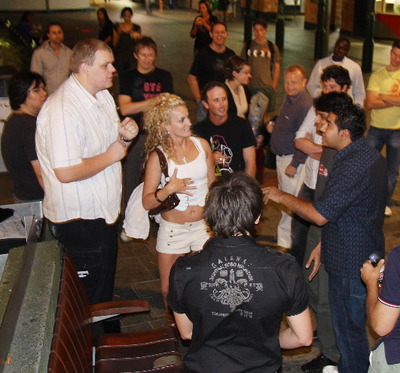 Buddhist from the start of the night began to advance at me yelling. He got so close that I thought he was going to hit me, so I asked him to step back, he refused so I asked one of the team to go get the police. After he yelled for a bit he backed away, and I was then able to expound on the grace of God to the two young ladies. The females were cut up and began to cry as they heard about Christ coming down from Heaven to save sinners.

It was about midnight when I stood down, and I nearly fell over from exhaustion, but praise God many people got to hear the gospel!!!

To God be the Glory