This Saturday was short due to my work responsibilities but we pray that God would use the work done relying on His power. Peter met me in Fargate and we prayed together shortly pleading with God that He would save the souls of the people we spoke with.

We began by handing out tracts, with the crowds in Fargate there were many tracts going out and we quickly worked through the ones that we had. Unfortunately few people will stop to talk or listen in Fargate but it is a wonderful place to handout tracts.

We headed up to the Peace gardens to preach to the people that gather there on a Saturday afternoon. The Sheffield City Ambassadors do not want Christian witnesss in the Gardens and will stop anyone who preach or witness in the area. We have had many discussions with the Ambassadors and at the moment we have consent to speak with people in the gardens but not 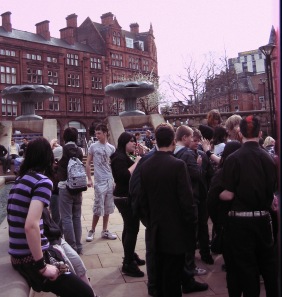 to give out tracts. As we walked through the gardens we ran into one of our regular hecklers William who stopped to speak with me. While we spoke Peter was hard at it giving out tracts and doing a great job of it.

William and I chatted for a short period and as he often does he brought up all the reasons why Christianity is false. Many of the things that he holds to are purely his opinion and there is no evidence that it is true. I often confront him on this and as to yet he has not brought any evidence to show the truth of his world-view. One of the things that he brought up were the Summarian Tablets, which were unearthed in the ruins of Babylon. These tablets, while they contain many interesting snippets of information about the ancient world, only provide context to the biblical account. In fact in the case of the myth of Gilgamesh and the flood it also confirms that there was indeed a world wide flood that occurred in the time span that is presented in the bible. 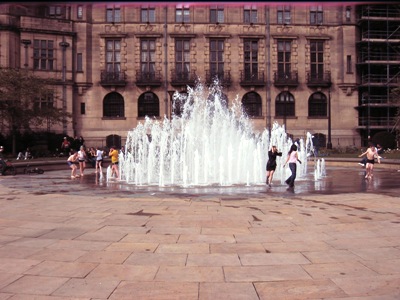 After a short chat with William he left telling me that again he thought we were wrong and that I should do my research but that he would leave me to preach as he knew I would. So I did, preaching from the side walk of an old street I gave a short gospel message to the people in the gardens. The Ambassadors predictably came and told me that I was on private land (which I was not) and that I could not preach there (which I could). I finished the preaching and Peter and I headed out to get back to our respective work places.

Praise God that the revelation He has given is so clear and that there is such a strong witness to the bible in the history and archeology of the world. We pray that He would use His word through us and that we would faithfully preach and proclaim all of His word.