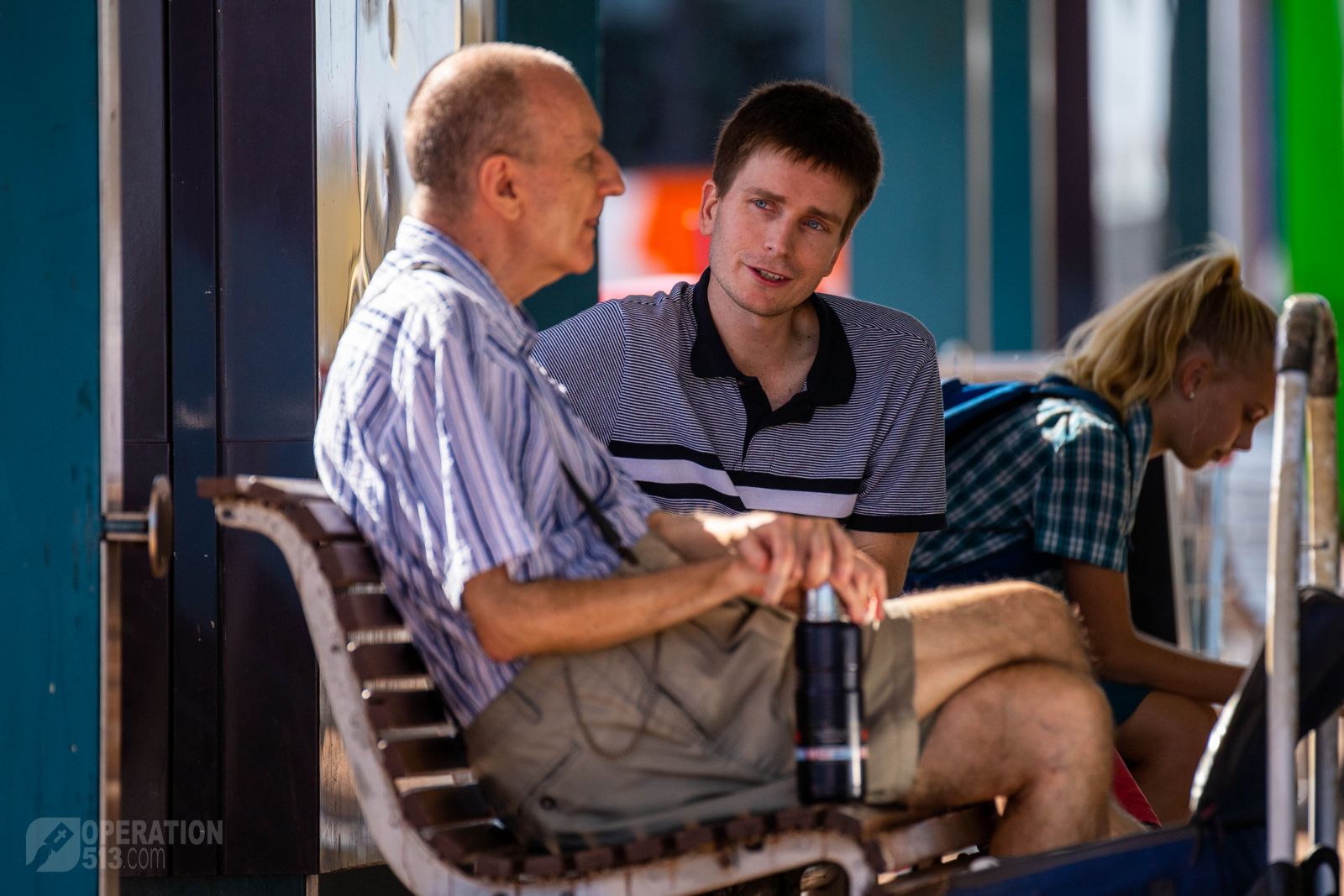 On Monday afternoon the sun was blazing making a number of the bus platforms warmer than normal. The team due to one conversation ended up spending an extra hour in the outreach. A man who had a Catholic background, hopped off the bus, was asked a question about eternity and said that he doesn't really like talking about it. One hour and twenty minutes later the conversation ended and he had been encouraged numerous times to turn from his self-reliance to trusting in Christ.

Due to the extended time, the team had over thirty gospel conversations during the afternoon! Praise God for allowing the freedom and openness for such a fruitful afternoon to occur. There were many conversations that took place and in the moment they can be extremely sad, for example one short conversation with an elderly SDA man. He was adamant that he must work for his salvation. He would say, "It is by grace alone but we have to earn that grace".

He probably won't survive to live in this world for another decade and if his pride remains in those short years, his eternity will be spent in hell.

It is conversations like this that are gut wrenching. He has every advantage to hear and understand God's offer of salvation. He has the Bible, in his own language. He has the ability to read and time on his hands and yet he prefers the false doctrine that enables him to have pride in his own achievements and abilities.

Despite this man's hard heart, we can know and rejoice that God isn't making mistakes. Whether this man remains proud until death and ends up in Hell, or God humbles him and leads him to Christ, the saviour of sinners, God is in charge and does not make mistakes. In our gospel proclamation, of course we want to see people come to a knowledge of the truth but we are called to be faithful in proclamation and nothing more.

There was a man Keiran who was spoken to, who once was a youth leader but had since rejected Christianity declaring he thinks he is a nephilim and has the ability to pay for his own sin. He says he is a spiritual health and wellness coach. Basically, he has foolishly rejected God as He has revealed Himself and then taken some parts from different sources and fashioned an idol out of his own ideas.

Another man Ray declared that we must simply have faith in faith. It was explained that it is the object of our faith that saves, not the faith itself. There are many faiths that are foolish. Many things people rely on and place their faith in, that cannot help. This was pointed out the Ray with some analogies and he was left to consider the only reliable object of faith, Jesus Christ.

Another lady Shirley declared a lot of different ideas, most important was the idea that God does not judge, He just forgives. This was pointed out as incoherent as to forgive someone requires you to judge what they've done as wrong. It was also pointed out that the one forgiving must take the hit. Shirley was a lady who was sure that she was a very good person and has lived a life very pleasing to God.

Another lady Linduca was adamant that she as a Buddhist was going to be fine. Even though in Buddhism one of the steps to enlightenment is to have no desires. The primary issue being, the desire to have no desires, is a desire. Linduca was shown the law of God, leading to a knowledge of sin and was left knowing the we can never be right before God on our own, only Christ can save a sinner.

Three others that heard the Gospel and responded positively were Brooke, Grant and Zane. They each did the good person test, saw their sin and the deserved punishment and heard God's offer of salvation. They were each encouraged to read their Bible and were left with a tract.

Please be praying for all those who heard the Gospel today. These numbers as well as many more. Please bring these men and women before God in prayer, asking Him to have His way with them, whether it be in changing their heart for His glory or hardening it for His glory. Please also be praying for the Lord of the harvest to send out more labourers, maybe even yourself!