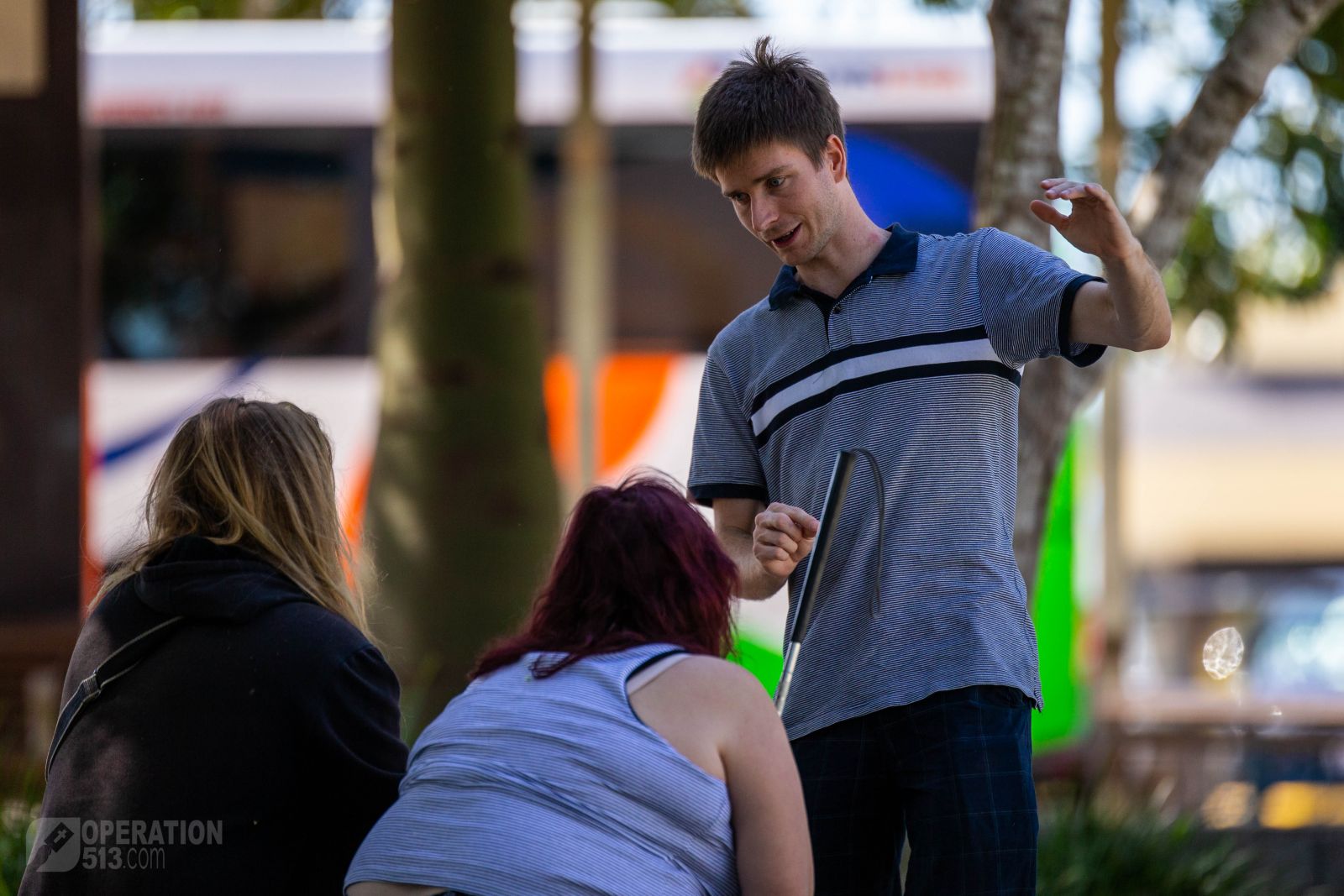 On Monday afternoon at Capalaba the atmosphere was very different to the Schoolies outreach of the previous week. None the less, God used the smaller team, in a quieter location to proclaim the truth of the Gospel so that people may come to know God.

One exciting point to mention is that the team occasionally run into people who say, "I have a friend at work (or school) that has been telling me about this!" This is a massive encouragement in a number of ways, firstly, it is wonderful to hear that other people are hopping out of their comfort zone and boldly obeying Christ, even in places where they will have to see these people again!

A secondary encouragement though, is that often the people mentioning it, aren't angry but are excited! They are happy to tell us about their friend who has been sharing this with them. They aren't looking back in frustration but it is usually an enjoyable moment when someone else shares the same message of salvation with them. They rejoice in their friend.

May that encourage you, most Gospel conversations are not events to look back upon angrily, but ones that people remember, especially when it is a friend that shares with them.

On Monday there was a scary theme, church goers who had no idea about the Gospel. One man Peter, had been in a protestant church for almost seventy-five years and he said, "I am hoping that I will have done enough for God to let me into Heaven". What a scary thought, that this man could have sat in church, almost four thousand times and never understand the truth of the Gospel.

There were also two ladies Nikita and Julianna, who equally attended Church but that had only been for around three to five years during their high schooling. Again neither of them were clear on the Gospel, they barely knew who Jesus was at all. This is scary to see the state of the youth groups in our day, that someone could attend one hundred or more times and never clearly and explicitly be told the main point of Christianity.

A third conversation in this category was with Reagan, he too went to Church and similarly was unsure about the way to Heaven. At first he brushed the conversation off because he said he already knew it all but after going through the good person test, seeing his guilt before a Holy God and being left with the serious decision between choosing sin or Christ Reagan said he would think about it.

It was a privilege to be able to take the opportunity to be the person that articulated the Gospel to him and left in a position knowing that the Gospel called him to repent or perish. Please be praying that Reagan sees the sinfulness of his sin and turns to trust in Christ alone for salvation. 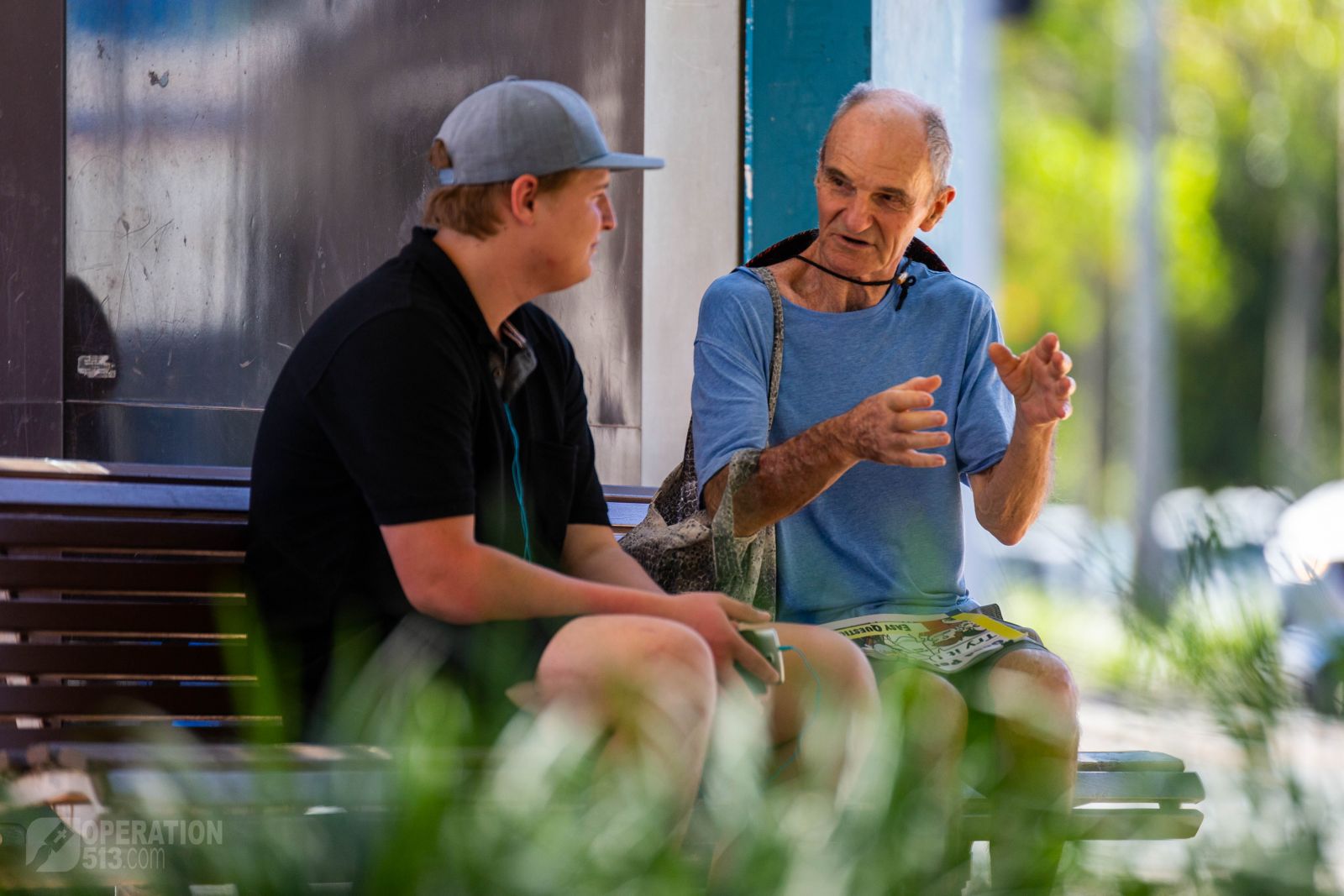 Two other exciting conversations were had with Erin and Nicola and Chloe.

Erin was happy to talk even though she had no religious background. She listened to the law and how all it can do is condemn us. She then made a side note about other religions which was answered by pointing out that they simply have a law but no saviour, leaving anyone who tries to follow them, guilty and without hope.

Erin said this made sense and then proceeded to ask more questions about Heaven and Hell. As the Gospel was being explained her bus arrived and she was left knowing half of what Jesus accomplished. Please be praying that Erin would read the tract she took and desire to know God intimately as a result!

The second with Nicola and Chloe was similar. Throughout the conversation Chloe shared that everyone around her said religion was rubbish and asked why she should consider what the Bible says but she also shared that she was scared of death. Through this conversation the two girls heard why we should be scared of death not because death is the end but because after death comes a day of judgement, when everyone, if being judged based on their actions will be found guilty and deserving of Hell.

But that God has acted in history, and the Bible records the things God did, said and promised, so we can see what God has done so that sinners can be made right with Him. The girls heard the Gospel and were left to ponder the question, will I surrender to Christ or defy Him?

Please be praying for those the team was able to speak with that they would heed the call of the Gospel and not leave it another day or another year.

Please be praying for your local Church that they would faithfully in all their ministries preach the Gospel.

Please be praying for yourself, that you would be emboldened to step out in obedience to God and share the Gospel with your friends, family or colleagues.