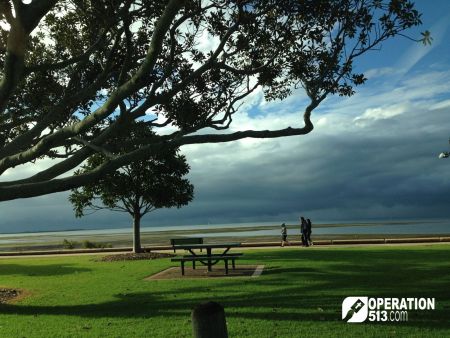 What a glorious day our Lord  gave to us  in which we were enabled by Him to show something of our love for Him - 1 Jn. 5:3. How much more glorious will the recreation be, especially when we see Him as He is? -  1 Jn. 3:2

Ryan and Fynn manned the jetty while Railee and I did a tour around the point. We met a young family, Jesse and Christine and their first child, one gorgeous little bundle of joy. They showed some understanding of why God could forgive them but were not familiar with the imputed righteousness of Christ. How can so many protestant churches not teach the basic fact of how Jesus saves His people from their sins? - Mt. 1:21 How can anyone be truly assured if they do not realize the completeness of the Lord Jesus Christ's finished work.

We conversed with June but after 10 minutes or so, we had not apparently communicated. Her Watchtower training had her well and truly bamboozled. Please pray for her as she is very religious having journeyed through the Baptists, Mormons, etc., but her professed saviour is only a created being who has not the capacity to satisfy  the infinitely holy God.

Meanwhile, among others, Ryan engaged a mature aged couple; the wife had been told that she had about 5 years of life ahead of her (barring a fatal accident or?). They both initially had been depending in their goodness to get into heaven. After hearing the bad and then the good news, she remained apparently unmoved while he said that he must consider God's message.

There was also a mature aged man who was going to heaven and jovially announced that he was perfect.  After hearing God's Word, He came to state that he would have to go over these matters with a Christian friend. Pray he does. (I had thought that Ryan could not 'get through' to this man, but God showed me again how wrong I often am. The night sermon was based on 1 Sam. 16:7 - ouch! Time to repent again.)

Meanwhile, Fynn was approached by 2 young ladies, Ellie and Rita. One could give a biblical reason for the hope of glory that she had. After further conversations, they expressed interested in our Sunday night training in King George square.

As always, we went home rejoicing and praying that God would be pleased to use His word, particularly with regard to the tracts we handed out with little comment. To Him alone be the glory as He keeps on drawing His elect to His Son who welcomes all who come to Him - Jn. 6:37,44.