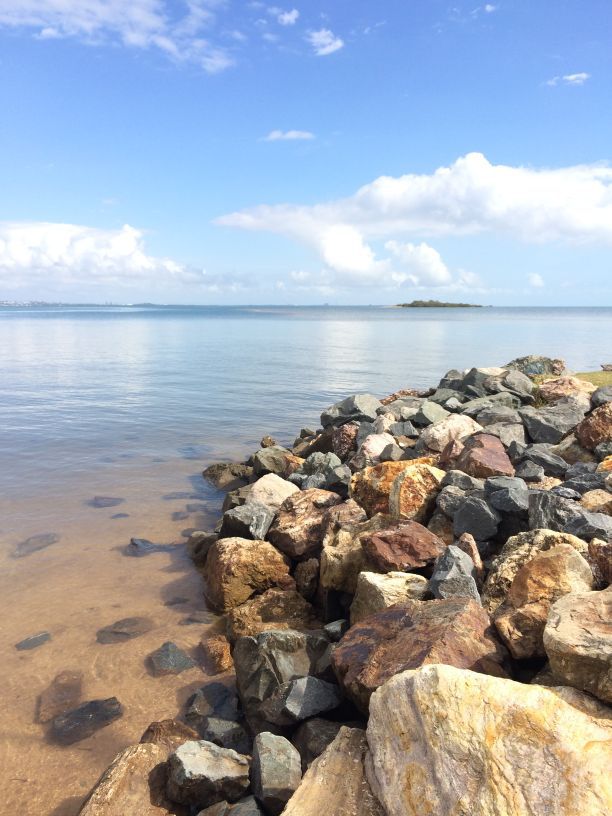 Arriving at our prayer spot, we noticed UQ, marine science tents in the lifeguard area. Following prayer the ladies headed there and were:

- encouraged as they met 2 South African men, C. & P., who were 'on the Lord's side'.  They were invited to and may attend a local reformed congregation which is only 10 minutes from where they are living.

- moved to compassion by G., an Indian man who was quite content to let them have Jesus but He is not for G. G. said that he had asked God, if he was there, to do some magic to prove it, so he thinks he is okay. G. was pointed to his need to 'test the spirits' to ensure he was not deceived. God does not do magic. Then he heard that we are all sinful and how Christ alone provides an atonement that satisfies God's righteous requirements so that the one trusting Christ alone can be reconciled to God.. Although G. had never read the Bible, when he heard Jn. 14:6, he said that Jesus never said that. Please ask God to deal with him through the "Which one is right' tract or whatever He wills.

Meanwhile, the 3 men at the jetty had various chats with:

- 2 Iraqi Muslims who were cousins with the same name, R. But they were chatted to individually as we 3 engaged them.

One R. said that he would not trust Mohammed if all the previous prophets  had told different messages. Pray he does distrust Mohammed and receives Jesus as his Lord and Saviour. (He had expressed unwillingness to 'let' someone else pay his sin debt, but changed his attitude after he had been challenged him twice, by different team members, on that point.)

The other R replied to the opening question by saying that  he would  go to hell as he had done many bad things. He listened to the gospel but was not that clear in answering the checking questions. They have both been encouraged to attend a Bible church near where they live. Pray they will go and hear the voice of God speak to them individually.

There is always more happening than can be told, so thank you for praying. Please keep doing so. For our part, we will keep going out as He enables us and to Him alone be glory and praise. He also enables us to go home rejoicing. How beautiful He is and unchangeably so.