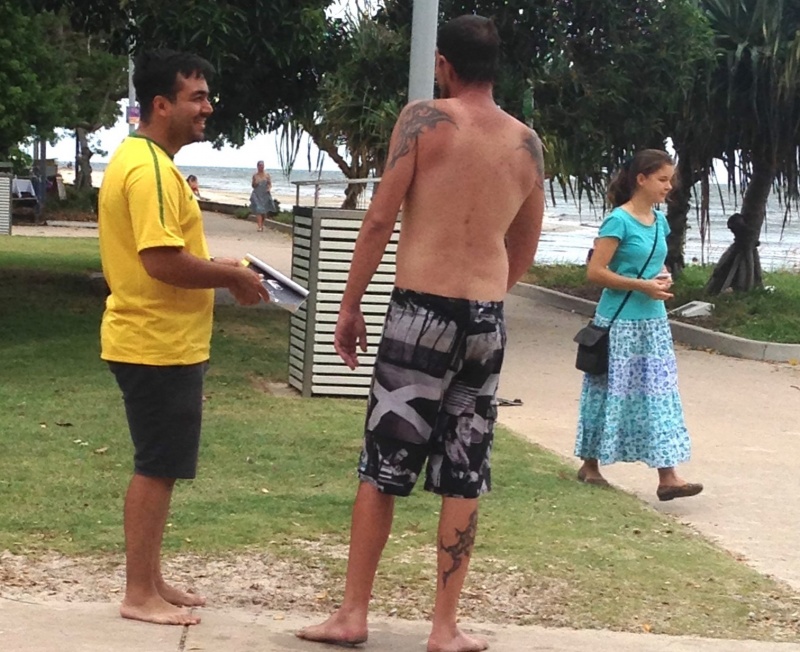 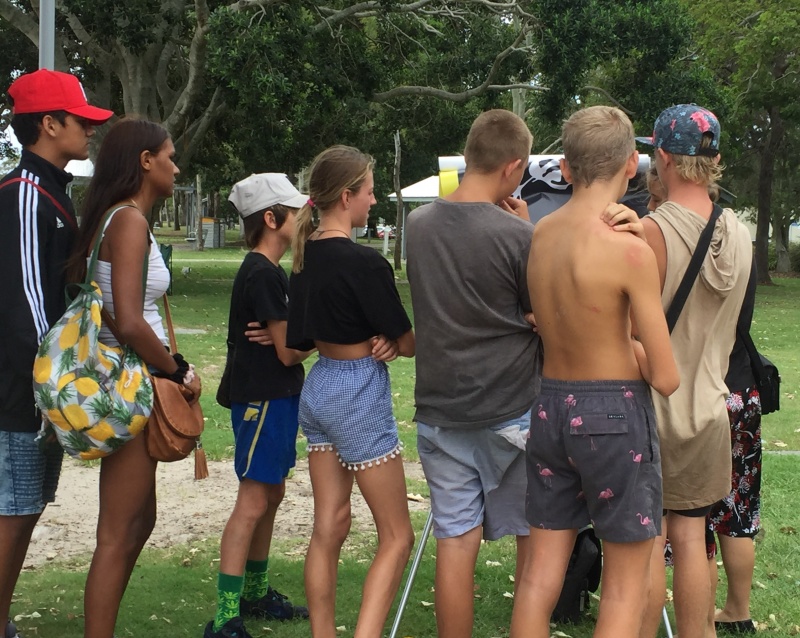 As the team met at the Bongaree Jetty this afternoon, no sooner was the flipchart up than a large group of young people came to ask questions and go through the Good Person Test.  Between 2 and 4pm, there was a constant flow of conversations, mostly with younger people, but also with several adults who were interested in Gospel conversations.  A number of copies of Scriptures were distributed, as were many Gospel tracts.  We warmly appreciate the amount of prayer that has gone into today’s work for the Lord.  We certainly felt God’s leading and blessing on and in the outreach.

One young man recognized and approached Michael to tell him that he was still reading his Gospel of John from last time they spoke, and that he was giving serious thought to the issue.  Pray that God would do a work in the heart of this young man, also named Michael.

As usual, we were warmly greeted by the local train ride driver, whom we see at every outreach.  He has received a Gospel tract in the past, so we pray for his salvation.  May our frequent presence by the jetty be a witness and a testimony to him.

One gentleman was speaking with one of the team members, a local pastor, and his question was, “What is the difference between spirituality(tarot cards, etc), and the work of the Holy Spirit(Pentecostal beliefs he had been exposed to)?”  While the conversation led to the Gospel, the man was encouraged to attend tomorrow’s church service, as one of the main points in the message was going to be the work of the Holy Spirit in salvation(Ephesians 1).  The man remained very interested and engaged throughout the long conversation.  He said he didn’t believe in coincidences, so he would think very seriously about what he had heard, and that he might come along to church.

Jacob, Jack, and Co. went through the Good Person flipchart, and each of this large group had questions and objections.  “If murder is wrong, why did God murder His son?”  “What about the people before Jesus came?”  “What happened to the Crusaders?”  “What happens to babies who die?” And many others.  These young people are desperately seeking answers, so may we always be ready to give them.  We tried to answer their questions and went through the Gospel over and over again.  Others came up and joined the group, and they wanted to go through the flipchart as well, so another team member took them through.

In the meantime, another from the team answered further of their questions relating to evolution, morality, and the authenticity of the Gospel message, and Maddy came over to the literature table.  She said she was going blind and couldn’t read, so she was given a DVD and the link to an audio Bible.  She apologized for the mocking behaviour of her friends, but she agreed that most of them would think more seriously when they were alone later that day.  She understood that we were sharing these things because we genuinely cared for her and her friends.  She thanked us and said she would be thinking about our conversation.

As we said repeatedly, as much as we wish we could, we can’t save them, and we can’t cause their eyes to open.  That is something only God can do, and something that must be personal for each of them, so we ask that you would pray for a great softening of hearts and a great turning to God.

Lilly, Rachel, and Leah also went through the Good Person flipchart, with two of them claiming to be Christians.  They listened intently, felt the truth in all they heard, and asked serious questions.  They were each at a very difficult place in their lives, all coming from homes with issues.  They heard the Gospel multiple times, and all three seemed to be sincerely interested. Pray that they would find answers to the sincere questions they have in their hearts.  Please pray for these girls to find peace and comfort in God’s grace and forgiveness.

Pray too for Mark who also heard the Gospel, as well as for those groups who chatted to team members at the literature table.  Pray for those who passed through and took tracts.  May much fruit come from the seeds which were sown this afternoon at Bribie Island.