Today’s outreach was to be held at the Redlands Easter Festival. Last year we went to the event uninvited and handed out tracts and spoke to people, and then by God’s grace the organizers allowed us to share the gospel at the event. But this year they extended a formal invitation for us to bring a team in so that we might be the evangelists on the ground.

When we arrived we were given a ‘show bag’ which contained some details about local churches, a gospel, and 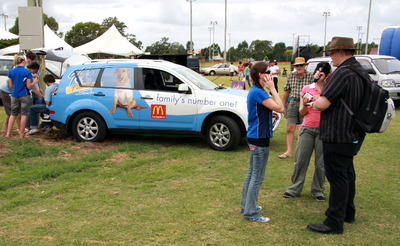 also a very soft gospel tract. Seeing this made us more determined to go in and share the biblical gospel with as many people as possible.

I noticed when I was signing in that my name bag had ‘connections’ on it, so I asked the admin man about it, and he said that was a ‘friendly’ way of saying evangelism. Personally I thought it was a way to soften the blow of the gospel, and to also hide the light just a little bit. After signing in I headed down and had a look at the ‘connection’ tent, and I saw that many of the tracts were very squishy, so I pulled out a pack of the Operation 513 ‘Big Money’ tracts, and placed them on the table. Within seconds people began to pick up our tracts and leave the others behind. It was really cool to see so many people walking around the festival with our tracts. 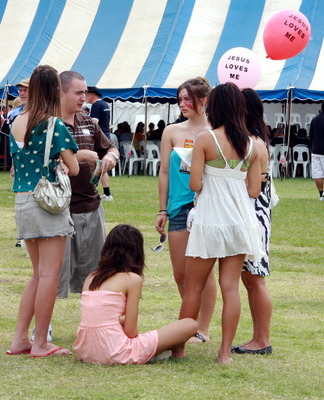 Desma and I teamed up to do some one to one witnessing and recording for Way of the Master radio, and as we began to witness to people it soon became clear that many of the professing Christians, weren’t Christians at all, but rather they were impostors with in the Christian camp!

One interview that really stands out is the one with a street van leader from 96.5 FM the “Christian” radio station in Brisbane. The young lady told me that they were all about showing people the love of God, and sharing the gospel. But they wouldn’t tell people about the gospel because it may offend. So I asked her how many people she has had a chance to witness to, she stated that to date she hasn’t shared the gospel with anyone. It was then that I offered her the chance to declare the gospel to me, she looked at me blankly, and after a few moments all standing around could see that she did not know what the gospel was. So I asked a few questions, but she didn’t mention the name of Jesus, nor did she mention what God had done for us, so I thought it wise to witness to her.  It is so sad that one has to witness to an ‘evangelistic’ ministry leader from a Christian radio station, but it just goes to show us the truth of Matthew 7:21-23.

We did a few more interviews, and one young man came under very heavy conviction as we shared about the gospel. After that interview we heard that the Premier of Queensland would be arriving soon in order to open the event. A group of us stopped and prayed that God would open a door for us to get a gospel tract to the Premier, after this quick prayer we went back to sharing the gospel.

About thirty minutes later we found out that the Premier was there, so we made our way over to where she was. Instantly we saw that there were a few security guards standing around, and to get to the Premier one would also 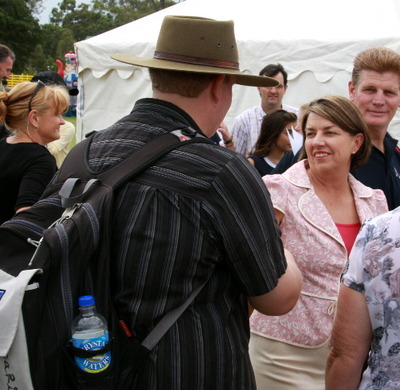 have to get through a bunch of local politicians. So I grabbed my gospel tract and walked up to the security guards, when I got to them I patted them on the back and told them that they were doing a good job, and that they should keep up the hard work. They smiled, and I walked right by them, I was then into the group of politicians, so I went up to the Premier and said “Excuse me Mrs. Premier”, she turned, from there I shook her hand and wished her a happy Easter, she wished me the same thing, and then I gave her the gospel tract and explained to her that it contained the message of why we are here today, and asked her to read it. She said she would, and as I walked off she was looking at the tract. Please pray that God will convert her.

The rest of the day was spent handing out tracts, and doing one to ones. It was also good to see other evangelistic ministries handing out our tracts, everywhere we looked you could see people with Operation 513 tracts, from the youngest of children through to the Police officers patrolling the event. The place was well and truly covered!

Praise God for His faithfulness in opening doors for the Gospel!