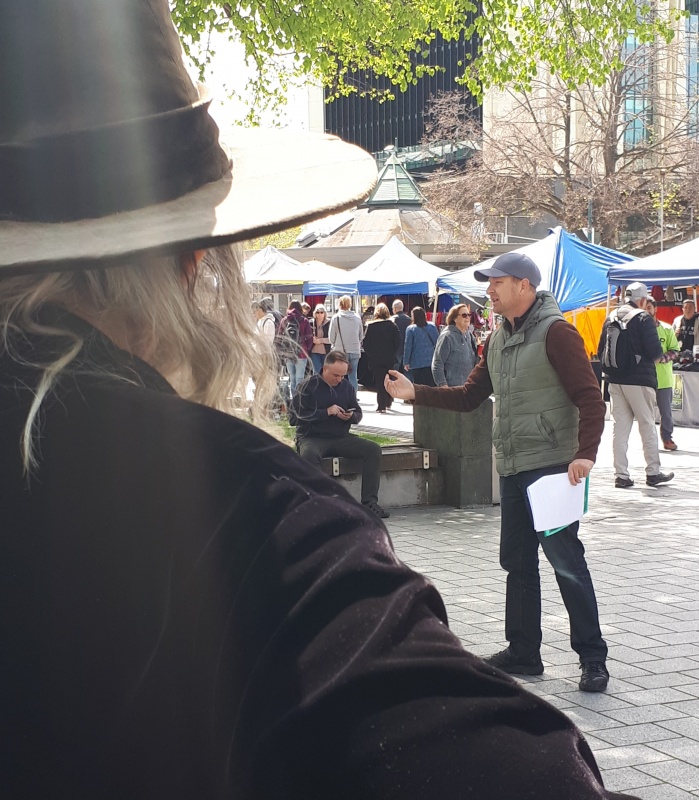 Thursday was another day of variable spring weather.  The switch between sunny and wet occured multiple times throughout the day.  Just before the Northlands outreach was about to start, the rain was extremely heavy (even going sideways at times)!  But Andy decided to brave the weather - knowing the bus shelters provided some protection.  And he was rewarded with almost constant gospel conversations!  I guess, while waiting at a bus stop, it’s just as easy to talk on a sunny day as a wet one.

Friday saw improved weather - although there was a cold wind - and so all the outreaches were able to proceed: gospel + abortion outreach outside Christchurch hospital, open air preaching in Cathedral Square, the afternoon outreach on Cashel Mall, and finally the evening outreach in the central city.

There was a team of three for the gospel + abortion outreach.  Praise God there were many opportunities to dialog with people on top of the voice of the signs we were holding.

One of those conversations was a follow up with a young man I’ve talked to multiple times in Riccarton.  He was very supportive of what we were doing.  I was very encouraged to see that he was holding a grasp of the gospel and showing signs that he may have responded positively to it.  I invited him along to our little church.  I hope to see him again soon!

The open air preaching in Cathedral Square was wonderful, there were many people about, and no music to compete with.  Andy had written a submission for the proposed abortion law change but was not selected to give an oral submission - so he decided to share his submission in the open air instead, along with sharing the gospel.

There was a team of three sharing the gospel on Cashel Mall.  I had a busy time - the highlight conversation was with a lady who had received a tract but took the time to come back and return it due to disagreement.  I ended up having a good conversation where we discussed our differences in belief - sadly, I’m concerned about this ladies standing before God.  Interestingly, as she was heading off, she decided to accept a different gospel tract from me.  She didn’t come back to return that one!

The day’s outreaches was wrapped up with a team of two in the evening.  Cathedral Square had been set up for an Indian cultural festival the following day, and a whole lot of people were waiting around for their turn to get on stage to practice.  This of course provided opportunities for gospel conversations: I was very encouraged to see one Sikh man understanding the gravity of sin when I explained that anger is murder of the heart to God.  I shared the gospel, and afterwards he was very keen to find out more, asking about a web site he could look at.  I was happy to point him to one.

Earlier, I had an opportunity to offer a tract to a couple of English cricket players walking past (they will be playing New Zealand, in Christchurch, next week).  I wasn’t surprised that they weren’t interested as I think I had an opportunity to share tracts with other players/coaching staff on Wednesday - they all turned them down then too.  Knowing this, I decided to be bold and ask if I could as a question - they didn’t stop, but one said, “sure”.  So I asked, “do you ever think about what happens after life?”.  I was ignored and they walked on.  But a couple of seconds later, he turned around to give me a look - as if to say: “what kind of question is that???”  I know cricket players think about death, we just have to remember Phil Hughes who recently died in a cricket match when he was hit in the head by the ball.  We have no idea when it will come - and it can be sudden!

The outreach finished with a wonderful conversation outside the bus exchange.  Two girls stopped who were willing to stay and talk about the things of God.  After hearing the gospel, one of them asked a key question: “What does God think of gays?”  It was my pleasure to say that God loves gays so much that he died on the cross for them, but that it was clear that God, who writes the rules, thinks homosexuality is a sin.  He has the power to change hearts - even with this sin - by the power of the gospel.  But she said, “Well, this lesbian is going to hell” - and she blew me a kiss as she walked off.

Jesus, may you receive the reward of your suffering!  Please show these people your mercy through your sacrifice and the gift of repentance and faith in you! 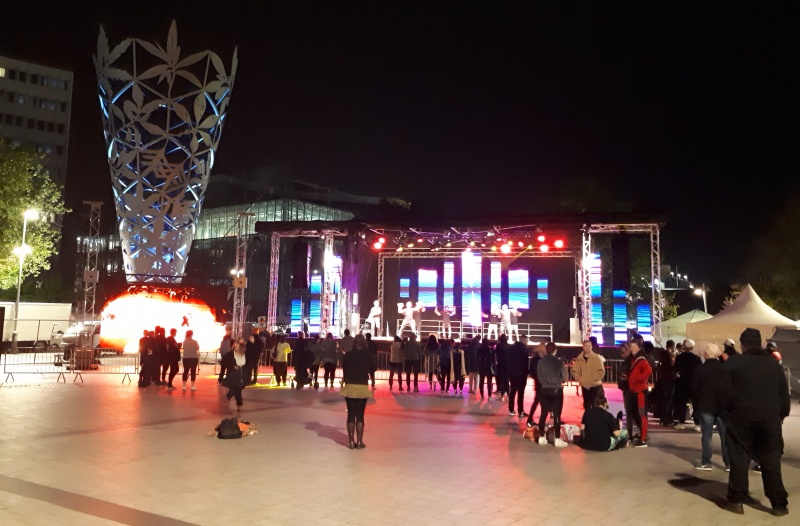