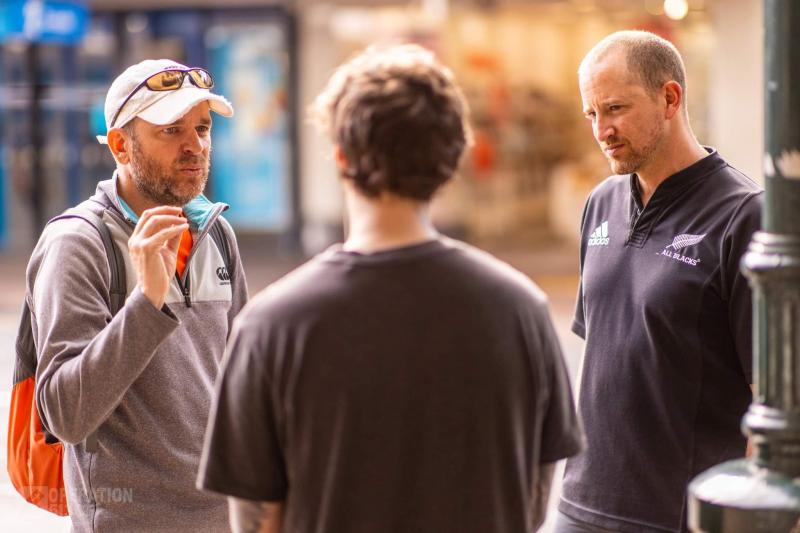 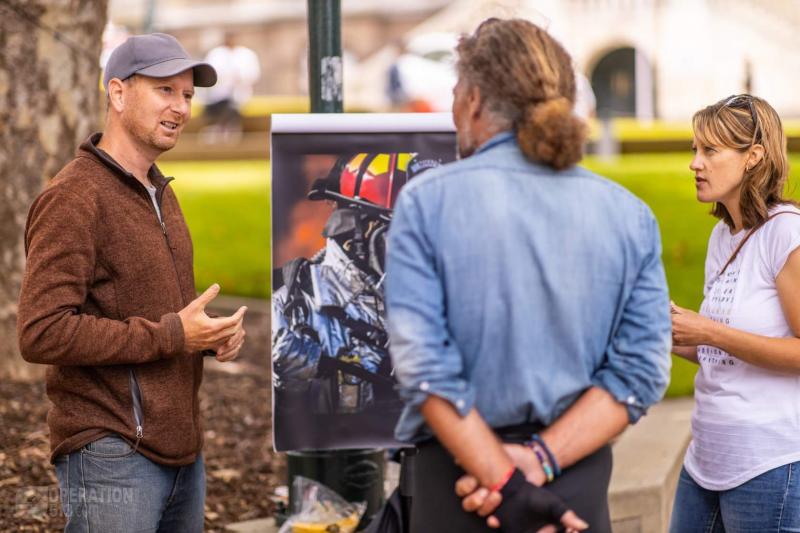 A battle log report of the New Zealand Summer Mission from an Australian perspective, part 2.

The week in Dunedin started very differently, the first morning of outreach consisted of three conversations with three heretics. The first was a lady who had been lead to believing that because she could utter phrases out of her mouth that she couldn't understand and had been immersed in water, although she was living adulterously and in direct rebellion toward God, was pretty sure she would be ending up in Heaven. The next was a lady from the same group (Revival Centres, an Australian export of false Christianity) except she was even further in, she was so sure that was how she would be saved that she rejected what God's word says in Romans 4:1-6, Ephesians 2:8-10 and every analogy about how gifts work. She was insistent, even after reading John 3 for herself (which she claimed talked about baptism) that it was her obedience toward God that would secure her eternity in Heaven. Lastly was a man who also was from Australia and was preaching that the life one lives after beliving in Christ was what would determines someone's entrance into Heaven. Thankfully despite the initial sadness bought by people professing the name of Christ who had been sucked in by cults the week began to improve significantly.

The first guy spoken to after lunch was named Cody. Over the course of the week the opportunity to have three conversations with him took place. This first conversation he came to understand the way to Heaven. After a morning with hard hearted people, he was open, willing to chat and grasped the good news very quickly. Two days later when he was chatted to again he said he had been wrestling with it. Not because the gospel wasn't good news but because he wanted to live his own way and specifically disagreed with God on the area of sexuality. He was given some simple answers and explanations from scripture as well as being asked some strong questions, the one that bought silence, was this, "Who knows better, Cody the twenty year old from New Zealand, or the eternally existing, all knowing, good and loving Creator of the universe?"

It is a pretty simple question to answer and Cody saw that his attempts to argue against God were folly. He was checked in with a final time on Friday and said he was really thinking it over. He knew that it was imoportant to consider, he was going to have a read of the gospel of John he was given and was very thankful for the opportunity to chat with someone who was patient, had simple and clear answers and really believed what they were saying.

Another exciting conversation was with Nelson who had moved away from the UK for work and left his wife behind (to follow when he got a job). He didn't really profess to be a Christian but was seriously challenged after a short conversation, was able to articulate the good news and how someone is saved and then asked a few questions about how to answer his wife who had started arguing some things about what meats "Christians' are meant to eat as she had started attending a SDA church. He was given the simple answer but was more importantly encouraged to start reading his Bible for himself (starting in John through Romans) to get a good grasped of the Christian message and lifestyle. I was able to speak later in the week and Nelson said he had a really tough chat with his wife about it. I encouraged him to pray for her, to keep reading his Bible to grow in knowledge and love for God so that he could lead and serve her well when they were back together.

A final conversation worth noting was with Gunja. A man who had been influenced by the JW's and was certain that if the Bible did not say what he thought, it must be "bodgey". He said the NWT was the only real Bible. In the first conversation he had two serious issues, firstly that people are made right before God by their own righteousness and secondly that Hell doesn't exist. Gunja, the discussion about Hell came first (as it was written on my tshirt) and it was answered simply by getting Gunja to read Revelation 20:7-14 in the NWT. He read it, asserted that it doesn't mention the word Hell and it was agreed that instead we could call it Gehenna, the Lake of Fire or the Second Deeath if he would prefer but that the idea of God's eternal judgement for sinners was clear in scripture.

Then he started to declared his own righteousness as the reason he would enter Heaven. He declared that he was definitly good enough. It was pointed out that he had blasphemed God multiple times by name during the conversation, had sworn, lied and been rude and angry and therefore he had no grounds upon which to declare that he would be good enough but Gunja in his pride determined he was fine. He was warned seriously about his eternity without Christ and he went on his way. He made a few stops by over the course of the week to stir up trouble but was mostly ignored because he already knew he was wrong and tried to justify himself with the declaration, "Hell does not exist".

A quick mention to God's sovereign will is regarding a young man named Ahmed. Glen approached him on Thursday and asked him what he thought happened after life, to which he responded, "Someome has already talked to me about this". When asked when and who, he mentioned it was in Brisbane and it was a guy with a camera. Glen pointed me out to him and he was pretty quickly wanted to leave. I spotted him and went to chat to him but he ran away. When he returned, I had a quick chat to him, he wasn't able to articulate the way to Heaven but I assured him that God was serious in getting his attention, this was now the third time we had spoken in as many cities. He was given a gospel of John and a tract and was challenged that he would have no excuse on judgement day when God had given him three very clear opprotunities.

Overall it was a week 89 conversations with 112 people and a wonderful time was had with the local Christians who hosted us and joined us for the outreaches. May God build His church in Dunedin! 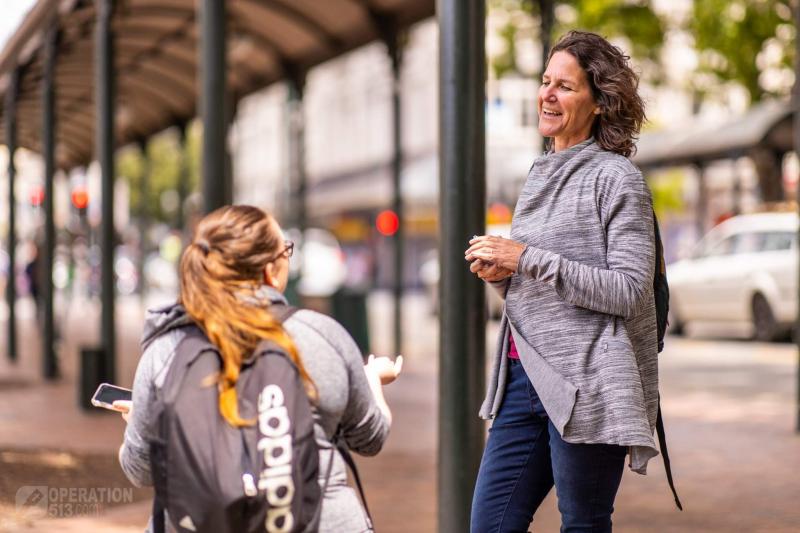 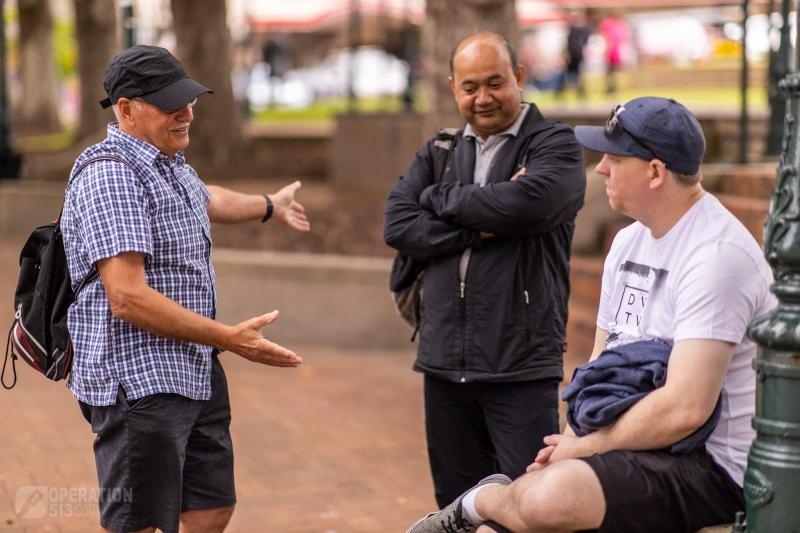 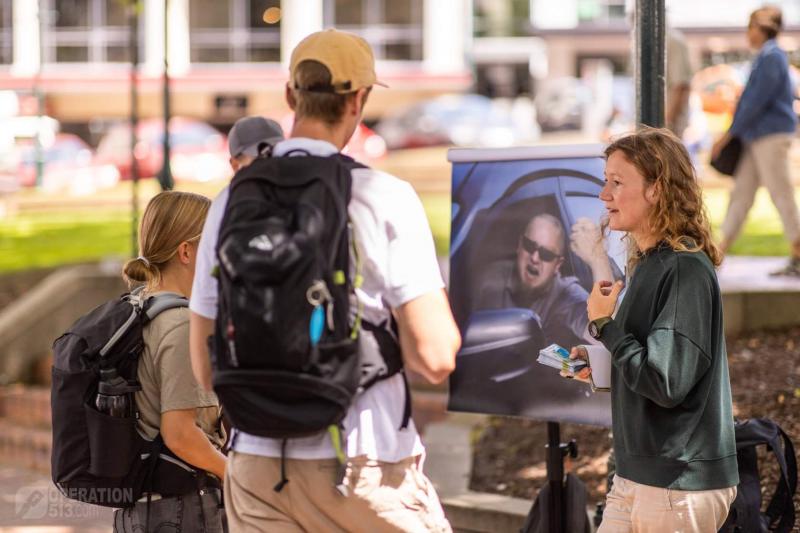 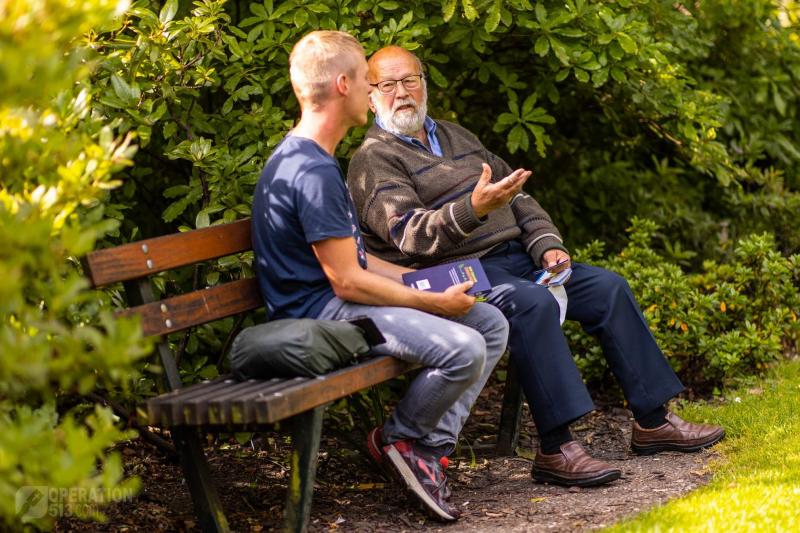