Saturday morning dawns bright and clear and it looks like a perfect summer's day. The markets in the center of sheffield have set up in fargate, offering all sorts of wares. There is fine food and drink, clothing of various sorts, and the usual collection of trinkets and ornaments. Some of the stall holders rely on the smell of the food to attract customers, others on the signs they erected, the occational one calling to the crowds to come and see. Part way up Fargate a small group congregates to set up a table and flip chart - what have they to offer? The free offer of salvation by faith alone in the saviour Jesus Christ! As the day goes on they call any who will hear:

"Come, everyone who thirsts, come to the waters; and he who has no money, come, buy and eat! Come, buy wine and milk without money and without price. Why do you spend your money for that which is not bread, and your labor for that which does not satisfy? Listen diligently to me, and eat what is good, and delight yourselves in rich food." (Isa 55:1-2)

This Saturday was a glorious day in many respects and not just because of the weather. We were blessed with the arrival of evangelists from all over the UK as we hosted the second of the Northern England Evangelism Circuit outreaches. The team tallied to 12 people all toll and to begin the day we gathered at a quiet spot to fellowship and spend time in bible study and prayer. It was a most encouraging start and we went out from this enthusiastic for the task before us.

There were many people in the centre of town due to the international markets - an unexpected blessing as we were able to give out tracts and speak to people with no thinning of the crowd throughout the day. The team set to handing out tracts while I set up the free bible table and some others the flip chart and preaching post.

The Bible table was a big hit and by the end of the day I regretted having brought so few bibles as we ran out in the middle of the day. Praise God that He make the hearts of people so hungry for His word. Throughout the day this little table was the site of many one-to-one conversations as people enquired about the reason for our hope in Jesus.

One conversation like this was the young lady who asked me exactly that - "why do you still believe in Jesus?". She had grown up in church and become doubtful and as time went by became cold to the things of God. Praise God she has recently started to look for a church again and when see saw the team and the Bible table came to ask about what we believe. I was able to give her my humble story and show her the reason for my hope and also the gospel that sparked that hope. I pointed her to some of the local churches that are evangelical and we pray that God would turn her from unbelief to trust in Him truly. 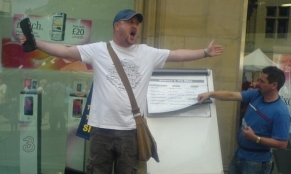 Shortly after this we began to preach and proclaim the gospel and call people to repentance and faith. First up was Dale from Cumbria, Dale has been coming along in leaps and bounds and I am impressed every time I hear him preach. He stood to preach and proclaimed the word of God clearly, a couple of people stopped to listen and one-to-ones sprung up afterwards. Lord use these words to draw people to yourself we pray!

Anna was speaking at length in this time with a couple of Jehovah's witnesses, these folk were querying the orthodox view of Jesus Christ. Anna is well up on the many ways that the watchtower organisation perverts the bible both in it's interpretation and in the translation from both Greek and Hebrew. It is so important to defend the faith against those who would draw people away from faith in Jesus alone to some other system, we pray that through God's power the words Anna spoke would open their eyes and show them the deception of the watchtower organisation. 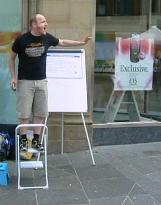 During the preaching a young man had stopped and Rob engaged him in a interview about the preaching. Darren spoke at length with Rob and by the end of the conversation was under heavy conviction of sin. When Rob spoke to him about his need of a saviour Darren responded that he wanted to become a Christian and did so with Rob and Anna encouraging him as he prayed to the Lord for mercy in Christ. We made sure that he had a list of good churches in Sheffield and a bible before he left our company and pray that we would meet him again. What amazing joy there must have been in heaven that day as the miracle of transformation took place in Darren's heart through the power of the Holy Spirit. We rejoiced also and praise God for His mercy to another rebellious sinner whom He has humbled through His grace. 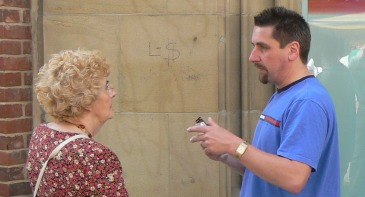 Just before lunch John stepped up to preach and in-keeping with the carnival atmosphere did some trivia to bring in a crowd and then went on to preach the gospel to those gathered. Afterwards many one-to-ones were happening and the few of us that weren't occupied with that were rapidly distributing tracts.

During this time Jim and Dale were in deep discussion with a catholic scholar who gladly spoke with them for upwards of 40 minutes. This conversation was a wonderful opportunity to share the gospel of grace by faith alone to someone trusting in the teaching of the catholic church which is more tradition than bible.

Our break for lunch was again a wonderful time of fellowship as we gathered around to eat and drink together as brothers and sisters under Jesus Christ our Lord and King. Afterwards Kevin and Carl both preached, both of them setting out clearly the wonderful work of God in both making and sustaining us and then in redeeming us from the world and sin. 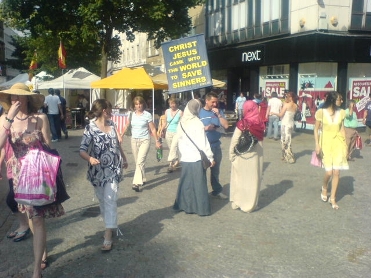 I stepped up to preach next and pointed people to the great blessings that they have through God's grace, I pointed to the greatest gift of all, Jesus sent to die for sinners. During this two young people stopped and I engaged them in the good person test. Wonderfully I was able to speak at length with them both and convinced (by their admission at least) that there was no hope for them apart from Jesus and His death and resurrection. However, in the middle of the interaction a man who often stops to heckle and scoff tried to stop them from hearing what I was saying to them. This is often the case that the enemies of truth will appear when the lost are hearing the gospel and try to prevent it anyway they can. Thankfully he left shortly after arriving and the others heard the gospel and I urged them to turn to Jesus as our time here on earth is short.

Jim was next to preach and did a fantastic job of closing the day, giving a clear presentation of the gospel and refuting the common errors that people will cling to. Again afterwards many one-to-ones started and I was particularly encouraged to see John interacting with two Muslim women and giving them the gospel. After this John and all of us were invited to discuss Islam and Christianity with them further at the local mosque in the near future.

We packed up, and though tired from the work we were rejoicing and so raised our voices in prayer to God for the many people who heard the gospel and received literature. O Lord will you please save these souls in your grace? Praise God for opportunity, praise God for strength and time to do the work in, praise God that He draws people to hear and be saved!