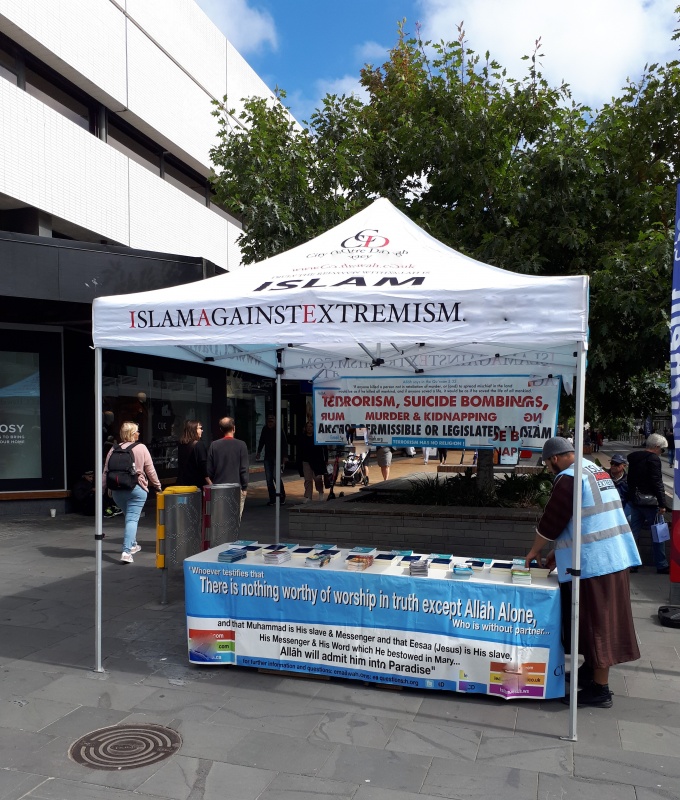 On Saturday I was in the city, and there were two separate Muslim groups out evangelising.  One group from Auckland in Cathedral Square, and Two guys from the UK in Cashel Mall.  The reason for this is that it has been one year since the tragic mosque shootings in Christchurch a year ago.

I started the outreach in Cathedral Square with a chat with a construction worker.

Then I had a whole lot of teen guys come past my flip chart and show a lot of interest.  There would have been at least twelve of them, plus a couple of adults.  I was engaging them with the first page of the flip chart, challenging them on how we know right from wrong when the adults said the tour guide was ahead and they had to go.  Some of the teens wanted to stay and talk, but they couldn’t leave the group - so they took tracts instead.

Many of them were holding copies of the Quran, and related literature, which is how I first learned about the Muslims being out.

Later in the outreach, I decided to pack up my flip chart and went to talk to the Muslims, to express my genuine sympathy, and to engage them out of love.  Two young men were happy to talk, and one of them gave me a Quran - which I accepted.

I asked them the key question: how do I go to heaven.  This led to a conversation where they talked about the mercy of God.  So I asked how God can be merciful and just at the same time.  They basically said that God is not like a human judge, he can forgive if he wants to.  So I asked if God could forgo justice for the mosque shooter and just give him mercy.

After listening for quite a while, I tried to show them how God can be both just and merciful: through sacrifice.  They had mentioned Moses, so going from there I started talking about the passover lamb - and then one of the guys, knowing where I was going, became super defensive.  The shields went fully up, and the conversation ended there.  But we parted on good terms.

I moved to Cashel Mall, and that is when I came across the second Muslim group (pictured).  These guys were in Christchurch just under a year ago - and one of them remembered me as the “Ray Comfort” guy.  I was honoured that he remembered me!

I also asked this guy how God could be just and merciful but, same as last year, his answers were windy and intellectual sounding without any content.  I challenged him on this, and asked him for clear answers.  Our conversation finished up a few minutes later, and we parted on good terms.

They were on one side of Colombo street, so I decided to set up my flip chart on the other side.

Sadly, while I was having that follow up conversation, I had two sets of people keen to try the flip chart - but there were no labourers to share the gospel with them.  Please, pray for labourers.

The outreach ended with a conversation with a man who had talked the Muslims, and then was keen to talk to me.  He was very smart, and very blunt.  Two ladies interrupted us to ask if they could ask a quick question.  I smiled and said yes.  They guy I was talking to said no!

After directing the ladies to the tram stop (and giving them tracts), I pulled they guy up and said he didn’t need to be rude.

But the gospel conversation continued.  He processed the logic, and didn’t like it.  He heard the law, but I can’t remember if he heard the gospel - I don’t think he wanted to hear it.  It was a tense conversation, but we parted on good terms.

On Sunday I was back in Cashel Mall, and my Muslim friends were in the same spot as yesterday.

I had some good gospel conversations but, again, other opportunities were missed due to a lack of labourers.

I had a quick follow up with a guy I had first talked to a month or so ago at Northlands.  I had a great gospel conversation with an Indian couple.  And another couple were keen to talk, but had to go - accepting tracts.

A friend had recently given me some NZ million dollar tracts - I love these, but haven’t used them for a long time as Operation 513 doesn’t sell these in NZ.  To finish the outreach, I had fun handing many of these out as I walked back to my car.

Looking forward to a day of rest on Monday and then getting back to work, God willing, on Tuesday.  Thanks for your prayers!