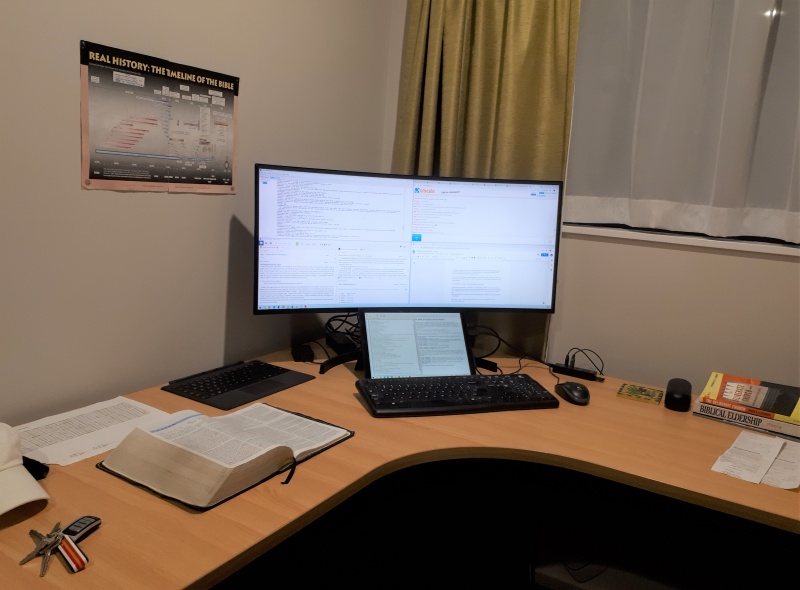 On Monday, in New Zealand, it was announced that the whole nation would be going into lock down to protect from Covid-19.  What this means is that everyone needs to stay at home, except those working in essential services.

So starting from Tuesday, I started doing online evangelism!

I then went to a web site that facilitates starting one to one conversations (via text): https://www.omegle.com/.

It took a few tries to get someone willing to stay and talk, but I was very encouraged with my first conversation.  It was with someone who was very resistant - an agnostic who was very close to atheist.  But they were intrigued with my line of argumentation, and stayed long enough for me to share the gospel!  They left the conversation soon after.

My second attempt was with someone who was Hindu.  But they bailed before I could share the gospel.

My third conversation was with a Christian from Brazil.  He was very encouraged by what I was doing:

You: No, the Bible teachers that God is just and must punish sin.
Stranger: and he did that
You: Yes, either in Hell, or on Jesus taking our punishment on the cross.
You: But there is 1 thing we must do in response to be saved: TRUST.
Stranger: YES
You: We are saved by grace through faith.
Stranger: YES
Stranger: i like u
You: So If you came to me, I would get you to realise your sin, and then tell you about Jesus. And then tell you to trust in Him.
You: :)
You: I like you too.
You: I'm from New Zealand
Stranger: yes
Stranger: im from Brazil
Stranger: it's a nice thing u doing man
Stranger: congrats
You: :)
You: I go on the streets to do this, but I can't now because of Corvid19... so I am trying to talk to people about Jesus on the Internet
Stranger: thats such a cool play
Stranger: i will do that too

After that, I decided to investigate other ways of doing evangelism online.  Over twenty years ago, before I was a Christian, and in the early days of the Internet, I used to use a thing called Internet Relay Chat (IRC).  I decided to look into this again, and I found a channel on the freenode network called “truth” - a place where people can talk about politics and religion.  It had been a long time since I used IRC, so I had to spend some time getting up to speed.

This work continued today.  After rushing out to buy a new monitor before the lock down (pictured), as I’ll be spending many hours in this new venture, I had downloaded an IRC client (mIRC) and had connected to the truth channel on freenode and started reading an FAQ to relearn how IRC worked.  I could see some people talking in the channel, but I didn’t take much notice.

After some reading, I looked up, and I noticed that people were talking about Christianity in the channel!  So I jumped in.  I started with: “Interesting, I just noticed that there is discussion about Christianity.  I am a Christian.  I was attracted to this channel by the name "truth" and the topic.”  And slowly but surely, I was able to join the conversation and make connections:

Response: “Can it be...another Christian?”
Me: “I am new, popped in yesterday for the first time.”
Response: “PLEASE return.  I'm usually the only Christian in here.”
Me: “I'm happy to stick around for the next 4 weeks at least.”
Response: “I can thank the virus for that? 😬😅”
Me: “God uses all things for the good of those that love Him.”
Me: “I can see it's going to be hard to follow conversation in this group - apologies if I miss things.”
Response: “oh, people in here will dogpile you, and yes, you won't be able to reply to all of it”
Me: “dogpile = overwhelmed with responses?”
Response: “Yes, many people wanting to go after the Christian :P”
Me: “I'm up for it.... I think :)”

So I ended up making connections with two Christians and I’m very encouraged.  I can see how important it will be to work on staying on target with online discussions - not allowing things to go down rabbit trails, but I'm hoping it will be very fruitful.

Earlier in the afternoon, I had another conversation via Omegle with a young ex-hindu now atheist from the UK.  I was able to share the gospel with him.

I’m so encouraged.  A whole new world of gospel opportunities is opening up to me.  I will keep reporting what I learn - maybe some of you will be able to do something similar while in lock down.  God uses all things for the good of those who love Him!