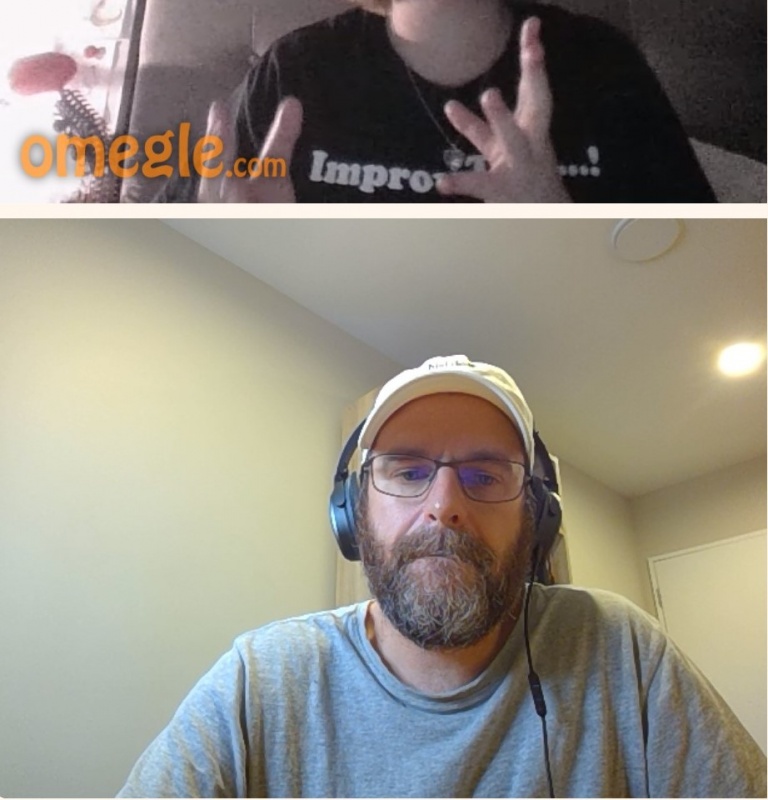 I had a hard outreach today.  It was wonderful, but very emotional.  Pastors, evangelists, all Christians often have to say some hard truths to people.  And those people don’t like it.  And often fellow Christians don’t understand, and question your motives.  But that’s okay - I do get it wrong, I know.  I want to learn and grow… but that’s not a reason not to keep trying, right?  To do our best to share this wonderful message of hope, no matter the offence it brings?

So over the last two days, I’ve been having video and text gospel chats, mainly on Omegle.

Lots of wonderful chats, and not only me, but many on the team, here are a few quotes, just from today:

“I had a chat with a guy who just found his old laptop in his basement, and he opened it and went on Omegle, the first person who came on Omegle was me. He came to grasp the gospel and even noted the time when he started believing in the middle of the conversation - 12:54am. Glory to God!”

“It was a wonderful conversation and you should have seen the smile on his face as he came to grasp the gospel. This beautiful grin came over him!”

“And they were so touched, they came to tears.”

But for me, two very hard conversations stand out:

In both conversations, the person I was talking to, insisted on their goodness - but for different reasons.

One of them really opened up to me and I had a real insight into his motivation for why he considered himself good.  He was comparing himself to someone who had done a very wicked and evil thing to him.  Compared to that wickedness, I think most of us would be going to heaven.  He himself was doing wicked things - but he didn’t realise it, until I pointed him at the standard we should be comparing ourselves to: God - who is perfect.

He claimed he didn’t care, but I showed him how I knew he did care.

The guy went from joking / mocking, to being entertained, to the point where I could tell this guy was very interested in what I was saying:

You: Do you want to hear the good news?
Stranger: sure

But he insisted on his goodness, in spite of the clear evidence to the contrary, and he didn’t like it.  He erupted.  And that’s when he shared his reasoning that I mentioned above.

I was devastated at the hurt that he experienced.  Oh the love, and concern I have for this guy, and I tried to express it, but it was lost on him.  He was very angry at God.  And he cussed me out big time, before he disconnected.  Oh, how I feel for this guy.  How I want him to hear the good news.  How I am praying for him.

The second person’s response to the understanding of their sinfulness was this:

You: But
You: He is also merciful
You: And he has done something so we can all be forgiven
You: But, God forbid, but if you were to die today, and face God, and be judged by perfection, would you be innocent or guilty?
Stranger: oh my, your so right
Stranger: i would probably be guilty
Stranger: i have sinned
Stranger: and i’m definitely not perfect

I was so encouraged, and I thought they would then open up to the amazing good news of the gospel, but instead they hardened to it.  When I asked if they would deserve heaven or hell.  They insisted on heaven.

I tried to reason with them, but they became harder, to the point of it being ludicrous. So I had to leave them to it:

You: But you are good enough for heaven? Ok.
Stranger: yes i am
You: ok.
Stranger: ok i’m done with this
You: NeedGod.net
Stranger: thanks for ruining my night
Stranger has disconnected.

I just feel devastated.  They are both maintaining their righteousness, and are not interested in the good news.  My only hope now is prayer, that this will weigh upon them, and they will come to an understanding of THEIR sin.  And that another Christian will have an opportunity to share the real hope of forgiveness found in Jesus.  That they will know the joy of salvation.