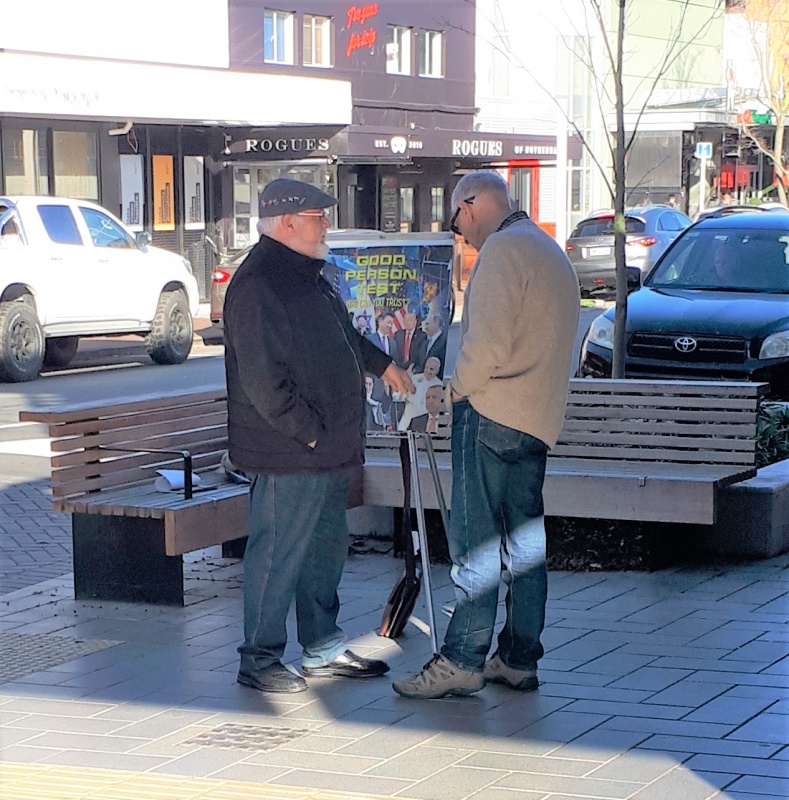 I was a touch late to Riccarton - Roger was already deep in conversation when I got there (pictured).  He had a good early run of conversations.

It started a bit slowly for me, I had two good follow up conversations, and then I got into an interesting chat with a young lady who was mildly intrigued at what I was doing.  She saw my flip chart which said “the good person test” and instantly assumed I was in a religion that taught good deeds to “make it”.  She said she could be good without religion, and the conversation went from there.  She accepted a tract, but handed it back - she was resistant but, strangely, she opened up and hinted at serious trials she was facing in her life at the moment.  She didn’t stay long, but she did accept the tract back again.  I was encouraged.

We had a bit of a lull in the middle of the outreach, and I was beginning to think on new locations for outreach when it finished with a bang.  The outreach went nearly 30 minutes over!

In a recent Riccarton outreach report I talked about some Christchurch Boys High students who I took through the flip chart.  I was discouraged because of their resistance.  I specifically remember the one who understood it the quickest being the most resistant!

Well, three of them were back - including the most resistant one - and they had four friends with them!  We had a long conversation, where I took them all through the flip chart and then spent time working through an excellent series of questions they had.  The most encouraging thing was seeing Mr. Resistant thinking deeply.

Roger ended up coming over to join the conversation.  He had frozen yoghurt for me that the Muslims in the shop had given us.  I gave it to the boys, who seemed to appreciate it.

Just then, one of my regulars went past - a satanist.  I left the boys with Roger and fell into an easy conversation with my satanist friend (yeah, those words were as weird to write as they are to read!)

Then the strangest thing happened, the CBHS boys had finished talking to Roger and had moved past me.  One of them came up to me and gave me a hug!  My satanist friend was as surprised as I was!  I chucked a checking question at the kid… and he got it right.  I challenged him, “when should you start doing that”?  He said, “I already am”, and he ran off to catch up with his friends.  I pray that that is so.

But it only gets stranger.  I wrapped up my chat with my satanist friend, and I shook his hand and said, “I’ll be praying for you, I want the best for you.”  As we were parting ways he said, “oh, why not… I’ll give you a hug too”.  And so we did.  If only hugs could convert - this guy would be saved.  But it’s only God who saves, through the gospel.  Oh God, save his soul for your glory!

What a fantastic outreach!

On Wednesday I decided to spend the whole afternoon in online outreach.  One of the conversations that stands out was one with a couple of teens.  One said they were a Christian, so I asked them what they had to do to go to heaven.  They both said, “be good”.  I shared the law and the gospel with them, and moved straight into my first checking question, the response from the Christian was still, “be good”.  So I re-explained and checked again, and to my shock it was still “be good”.  I was lost for words.  She looked at me like I was queer and then disconnected.  She seemed completely blind.  I encounter it so often, I shouldn’t be surprised.  But it’s so frustrating.  Luckily my last conversation of the day was with a “Christian” who did come to grasp the true gospel.

Thank you Lord for the many gospel opportunities of these two days.  And thank you for your support of the Christchurch (NZ) team.  We so appreciated it!  To God, alone, be the glory.