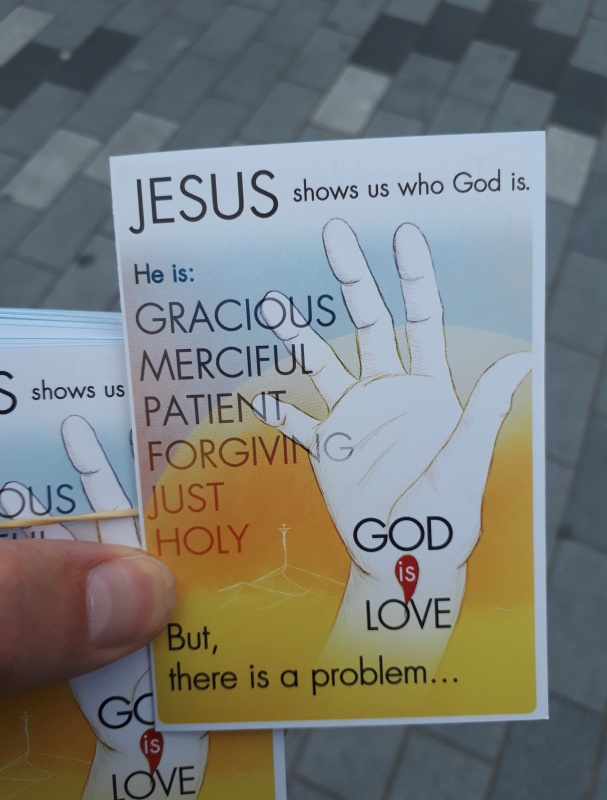 The end of another weekend of outreach in Christchurch (NZ).

Saturday was a bit slower than normal - I positioned myself in my usual Saturday spot near the Bridge of Remembrance.  I managed to have a few good follow up conversations, and hand out a few tracts.  Even the busker who was near me said it was slow!

I did have two good opportunities.

A middle aged couple walked past.  The wife beelined away from me, but to my surprise the husband walked past and accepted a tract.  I asked him what he thought happened after life, and he stopped to engage!  His wife abandoned him - but he wasn’t concerned.  It was a straight forward gospel conversation where he grasped the concepts quickly.  I challenged him to respond before he moved on to catch up with his wife.  The gospel is the power of God to salvation.

I approached a father and son.  Later it turned out I had talked to the father (a Christian) on a previous Saturday, but at the time he subtly indicated that I should talk to his son - which I did.  The son considered himself a Christian, but pointed to his good deeds as the reason he would be going to heaven (sigh).  He seemed impacted when I explained the gospel.  This is not a judgement, but a plea: Fathers - It’s not the ministers job to share the gospel with your children, it is yours.  You need to be constantly going over the gospel with them!

By this stage, the buskers act was in full swing, and it was loud, I decided to move locations to the Colombo and Cashel corner to finish the outreach.

Sunday afternoons outreach was the opposite of Saturday, it was busy and interesting - very interesting.

I started the outreach on my own, but I had Daryl join me.  I prayed for gospel opportunities.

First up was a conversation with a liberal American Muslim whose son (with her) and husband (who survived) had been shot in the terrible mosque shooting of the previous year.  We ended up talking for about forty minutes.  Her defensive walls to objective truth were very high, and she really liked to talk.  I knew tackling her defenses directly would be futile.  So I just patiently listened, and waited for opportunities to communicate.  Amazingly, I found a way to be able to explain the gospel to her a number of times and then watch her process it and reject it.  Every opportunity I could, I would gently lead her back to the critical issue of how God (who made the universe and has the right to make the rules) can be just and merciful.  And how Jesus is the only answer that makes sense.  When we finally parted ways, I re-expressed my deep sympathy for what she, her family, and community had been through.

By this stage, Daryl was with me - it had been a long while since he had joined me for outreach, and so I took him through the new flip chart we use.

Low and behold, two girls walked up and wanted to give the flip chart a try!  I quickly read it as a set up - they just wanted to attack.  It turns out I was only partly right.  One of them was Wicken.  Like Friday, the issues of why God allows suffering and homosexuality came up.  And also the issue abortion.  They were following the logic of my explanation of the gospel, and picked it up quickly, when one of them suddenly got angry at me.  I asked why, and she quickly calmed down - but it rattled me.  She was deeply resistant.  Later, she asked me why I do what I do.  She even said it annoys her that I’m out on the streets - it was actually a very encouraging thing for her to say.  I work very hard to not be offensive myself, but the gospel will offend!

We got into another conversation with a couple of girls - but it was quickly interrupted by a guy I’ve spoken to before who was in passive intellectual attack mode!  We lost the conversation with the two girls.  I had to work to turn the guys attack mode off - I refused to engage him otherwise.  It worked, things calmed down, we didn’t have the time for a proper conversation so I offered contact details so we could continue the chat.  He initially refused, but then he gave me his email address.  I’ve emailed him, and he has responded!  I will continue that conversation on Tuesday.

Sunday afternoon was exciting, I don’t think my writing has captured it.  We are standing against this culture with the gospel, and I’m seeing little signs that it is having an effect (all glory to God alone).  Please pray for strength and protection to continue the fight.

Excuse the photo, it’s the only one I took over the weekend of outreach!