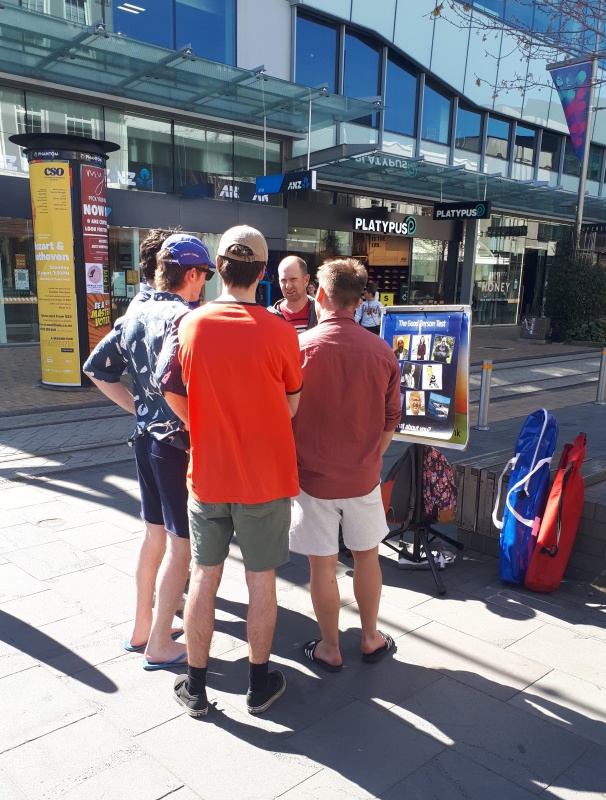 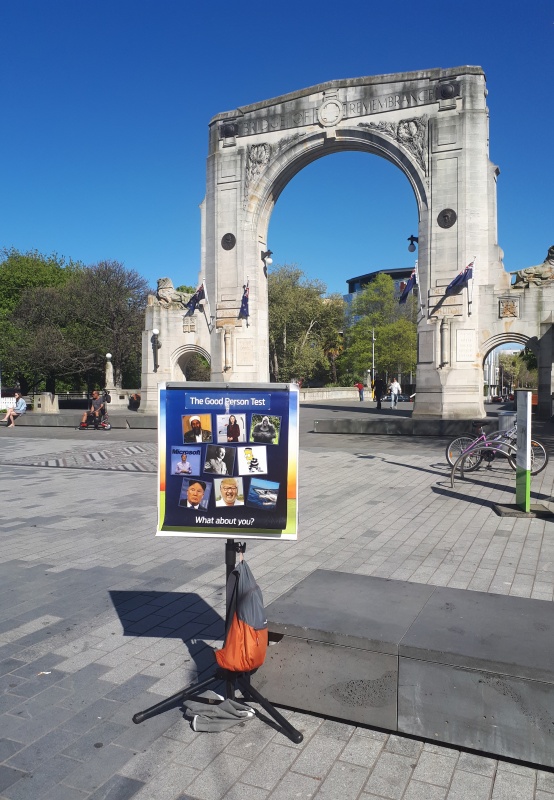 Saturday I was back to my usual spot at the Bridge of Remembrance.  Eventually, there ended up being quite a few groups there.  There was a group protesting child abuse, Falun Gong, the Hare Krishnas, a group protesting the CCP in relation to Hong Kong.  And me!  The lonely Christian.

The highlight conversation of the morning was with a lady who had come in support of the child abuse group.  She had been raised an atheist, but was wrestling with the reality of evil in the world.  We had a lovely conversation where I would listen to her and appropriately challenge her thinking.  I was able to touch on the gospel a few times.  She received a phone call which, unfortunately, ended our conversation.  But she did accept a follow up tract.

In the afternoon, I joined the Aussie team for a couple of hours of outreach online.  The gospel conversation that stands out in my memory was with a girl who went to a Catholic school in Australia.  She was very open to the logic of what I was explaining, and thanked me afterwards - before we disconnected.

Today was Outreach Sunday for Redemption Church.  There was a good sized team handing out tracts and having conversations via flip charts.

I hadn’t even finished setting up the flip chart, when Andy noticed some guys that looked interested - sure enough they were, and Andy had a long chat with them (pictured).

While that was happening, the local member of parliament went past: Duncan Webb.  I stopped him and asked why I should vote for him.  It turns out his PhD is in Ethics.  So I challenged him on where we get ethics from.  The conversation quickly turned religious and he mentioned that he had grown up in an evangelical Christian environment - I challenged him on what the core of Christianity was about: what do we have to do to go to heaven?  He wanted to bail from the conversation at this point, so I switched the conversation to politics.  I asked him about freedom of speech (something his party wants to restrict) and abortion (something his party liberalised earlier in the year).  Sadly he really had to go by this point.  But he accepted a gospel tract.

Later I ended up having some good conversations with resistant young people (2 x 2 late teen guys) - I never made it to the gospel, and yet they all accepted tracts.

After this, I ended up pairing up with a member of Redemption Church to set up a new flip chart further down the mall.  Sadly, we didn’t get any good conversations going.  But I did notice that Andy was being interviewed back where he was!  Turns out they were some guys doing a school project who wanted an alternative point of view.  They certainly got it from Andy - they had a long chat!

[Edit: I just remembered, one of my regulars came up to say hi at this point.  He said he is a Christian and wants to get baptised!  I queried him on the gospel and what local church he is connected to - he gave good answers!  How wonderful.  Glory to God for that!]

It certainly was an interesting outreach!  So grateful to have members of Redemption Church out with us today.  May Christians continue to be encouraged in sharing the gospel, and the lost continue to hear the gospel!  All glory to God alone.