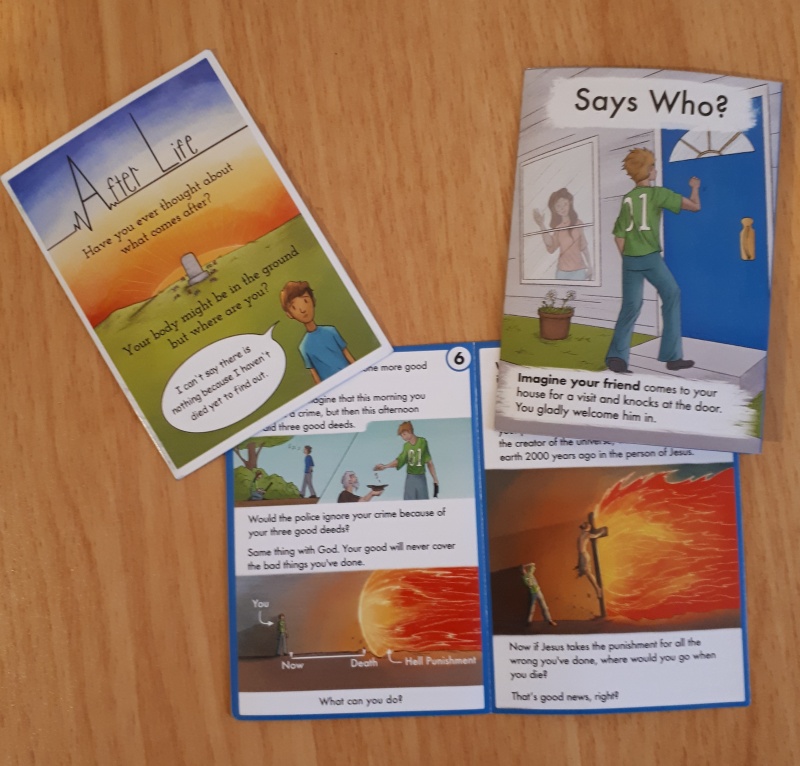 Tuesday and Wednesday were wonderful days of outreach for the Christchurch (NZ) team.

I was online in the morning and early afternoon before joining Roger and Binu in Riccarton.  Due to the school holidays it was a very busy outreach.  Pretty much no down time - which was great.  And the conversations were quality.  Three times I made it all the way through the flip chart (19 pages) with people!  The flip chart is a wonderful visual tool for making the gospel and associated concepts really clear for people, with lots of checking questions built in.  You can buy the mini version here (NZ) or here (AU)

Of the people that made it all the way through, the first was with two teen girls.  The second was with a guy who said he often sees us on street corners, but hasn’t had the opportunity to stop or talk.  I could tell he understood the gospel well, as the flip chart anticipated his questions perfectly!  And yet, sadly, he was resistant to it.  The third was with a teen guy, who goes to a religious boarding school - even went to church twice a week, but he was looking to his good deeds to get him to heaven.  It was a long conversation where he asked some great questions at the end.  He took tracts and knows how to get in touch.

I was also able to interact with others too.  I had two guys come down keen to give the flip chart a go.  It was a “set up” - they knew what it was about and they wanted to argue.  They were “atheists” - early in the conversation, one of them pulled out their phone and started recording - fine by me!  I never got to share the gospel, as they were not ready for it.  I spent the time on simple apologetics and the law.

I was too busy to notice what Roger was up to, but from what I could tell, he was having plenty of gospel chats too.  Binu handed out tracts.

On Wednesday afternoon I started in the city without a flip chart.  It was a lovely day.  Before I got to Cathedral Square, I encountered two guys I’d briefly talked to on Saturday.  Sadly, they were trying to sell drugs.  I had an opportunity to take them through the law, but they didn’t stick around for the gospel, sadly.

After that outreach went fast, I had three other long chats.  The first was in the Square with three Mormon girls.  I then decided to head down Oxford Terrace before heading towards Ara.  I never made it to Ara.  There were lots of people on the other side of the Avon river, so I went there.  My last two conversations were there.

The first was with a young guy and girl.  Man did they talk!  I had to be really patient as they kept interrupting - but it wasn’t a bad thing, it seemed to really help them slowly process what I was trying to explain.  I’m glad I persisted, as I could see them softening.  They heard the gospel - may God have mercy!

I then saw another couple and decided to approach them.  When they looked up, I realised that one of them was one of my regulars!  The guy she was with I hadn’t talked with before though.  So we fell into a very deep conversation where they both peppered me with difficult, and serious questions.  I did my best to keep coming back to the gospel.  The guy became mildly resistant as he wrestled with the honest answers he was getting.  I didn’t push it, but I did make sure he understood what he had to do to go to heaven before I left.  I also left him with tracts.

I finished the day of outreach online.

I thank God for his patience in giving us these days to share his gospel with many.  Lord, use it to bring change in their lives and in our society for your glory alone.

PS, no time for pictures, enjoy my mock picture of some gospel tracts!