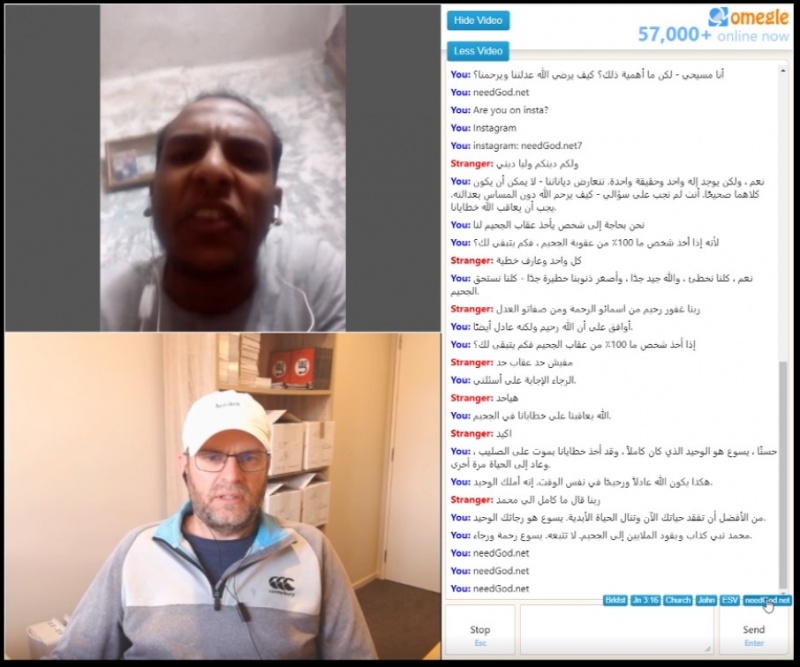 During the weekend I was with the team in Brissie for online outreach.

My first chat was with a Catholic guy.  It was an odd conversation - he seemed to be following along with the logic of the gospel, but he didn’t seem to be taking it seriously.  Early on he picked up on what I was doing, and mentioned Ray Comfort of Living Waters.  He was distracted, and he would start asking me about my family.  I ended up ending the conversation.

A couple of conversions later and I was connected to a young man from Egypt.  His English wasn’t the best, so we ended up switching to Arabic - me via Google Translate.  It took me some time to get him engaged.  What did the trick was asking him if he believed in God.  He was shocked and offended that I would ask the question at all.  It turns out he is Muslim.  I continued to work through explaining the law and the gospel.  He would read everything I said to his Mum (which was great) - I could listen to them talking to each other to formulate responses.  The guy started getting more and more agitated, but I decided not to back down - he needed the truth.  The conversation ended with me saying I loved him and wanted God’s mercy for him, while he was telling me he hated me!

I was beamed into a stationary car with two Catholic lads.  I was able to work through the law and the gospel quickly.  I was explaining grace, when one of them smirked and disconnected.

Next God brought me to a guy who was getting drunk.  He had friends with him.  They heard the gospel.

Next up I was beamed into the bedroom of a kid who was slow in grasping what I was explaining.  I was determined to slow down and labour with him.  He eventually came to an understanding of the gospel.  He was going through some struggles, I pointed him to the Bible and a local church.  It was a great chat.

On Sunday I was paired with Ryan again.  So good to be sharpened by his feedback, and to listen to his gospel conversations.