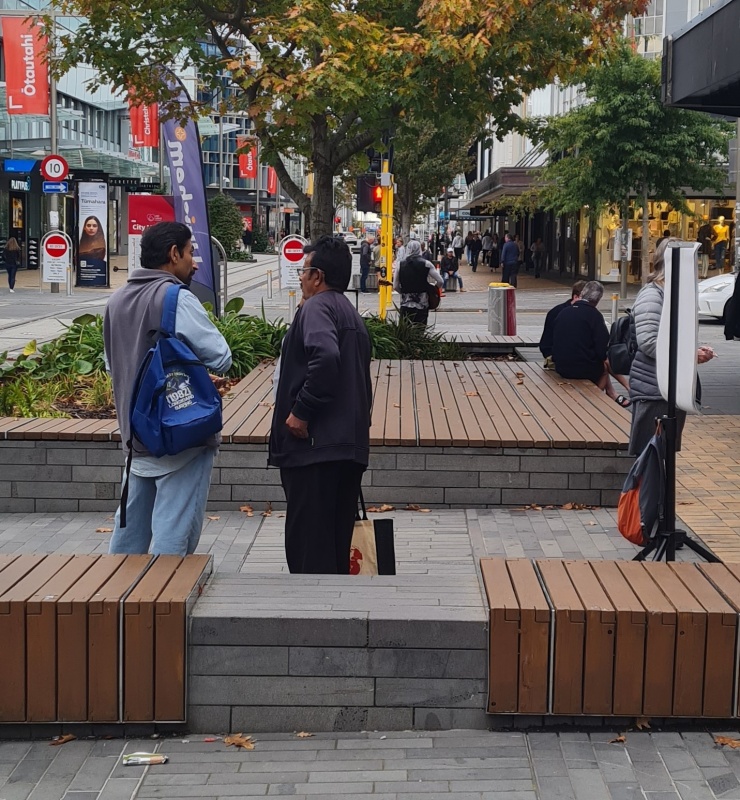 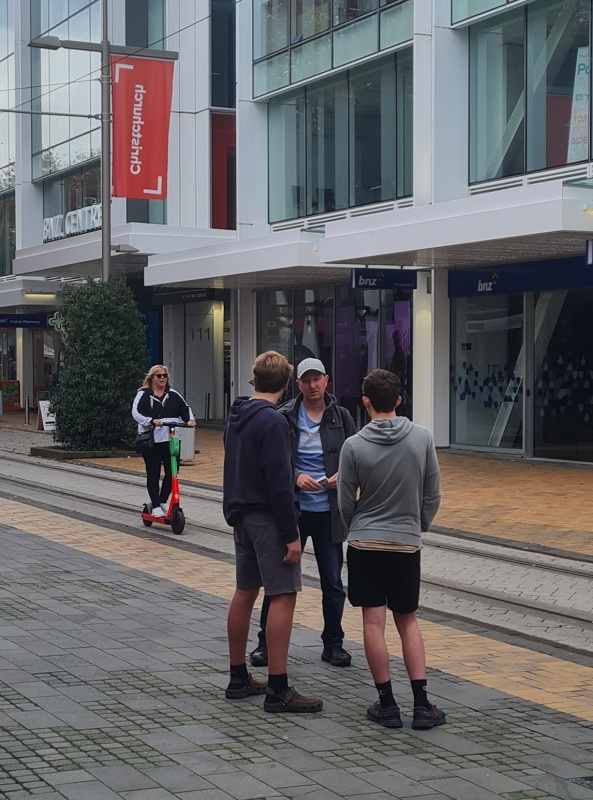 Today it was good to get back on the streets: Cashel Mall.  Team of five.  Andy was doing “walk up”, Binu handed out tracts, and I ran a flip chart with the other two (relative newbies).

I had three main conversations.  One on my own, the second with the first newbie, and the third with the second newbie.

The one on my own was hard.  A girl stopped and came back to take a tract, but then she started grilling me on whether I or my church actually help people.  The insinuation really hurt me.  I took it for a while, but I couldn’t help getting defensive.  So once she’d finished telling me off for not being a good person, I asked her what happens after life.  Her answer was “nothing”.  So I challenged her on why we should help people.  I have a basis for that: God who is merciful.  What was her basis?  I held her to it.  She got angry, gave the tract back to me and stormed off.  I’ve reflected on that conversation.  Next time, I’m going to say, “you are right - I don’t help people enough, I’m a bad person”.  I know I fail, I can admit that.  But then I’ll say, “by the way, I know of some good news for bad people.  Are you a good person?”

The second chat was with a couple that had a dog.  It was a great chat where I was able to work all the way through the flip chart - it was a great opportunity for the newbie to watch it in action.

The third chat was with another couple.  I was surprised they stopped at all, and the conversation needed to warm up gently.  But they stayed to hear the law and the gospel - she was very resistant to the idea of someone else taking her punishment, and I was able to demonstrate a # of analogies: someone else paying her speeding fine, the ambulance analogy, the cure analogy - demonstrating the offence of rejecting a gift.  I even talked about the consequence of rejecting the gift of a king.  There was something deeper going on in her life that she wasn’t ready to discuss.  The conversation ended well, and they left with a tract.

I made it home for the last hour of the online outreach.  I had one great chat, with a kid who didn’t believe in God.  After hearing the gospel, he said he believed that Jesus died on the cross for him.  I asked him when he started believing that.  He looked at his clock and said, “about fifteen minutes ago”.  I challenged him on the cost (a change in this life) of the gift (eternal life).  His answers suggested that he wasn’t repentant, but he did say that he has talked about this subject with friends and they have never been able to give satisfactory answers, he said that this was the first time he had those questions answered.  We ended up connecting on Discord.  I leave him in the Lord’s hands.

On Saturday I was online once again.  I had some very encouraging chats.

My first one was a fail, but I didn’t let that discourage me and got straight back to it.  And my second chat was outstanding.  It was with a guy in India who was sitting at a Keyboard (pictured).  The longer the conversation went, the more engaged he became to the point where he adjusted his camera so I could see him face to face.  He was Catholic, and came to understand the gospel, he then had questions he wanted answered.  I also asked him questions to make sure he was understanding the gospel.

I had a bit of a crazy chat with three people from the UK.  They would resist, I would respond with reason.  They would try to shock me, I didn’t leave.  One of them even farted!  I laughed with them, and then went straight back to talking about the important question of life.  After nine minutes of this, they bailed.

An American kid with a big Trump banner on his back wall was next.  It was a great eleven minute chat where he came to understand the gospel, and professed faith even after counting the cost.  I pointed him to a Bible and a local church.

I connected with a guy from Iraq again - very curious.  I tried to engage with him, but it was difficult due to language, and him simply not responding to my questions often.

The highlight of the day was a chat with a Hindu guy in India.  It went for fifteen minutes.  I had to listen to myself via feedback through the whole conversation which made it very difficult, but I’m so glad I persisted, because this guy came to grasp the gospel, seemed blown away by it, and then professed faith, even after me extensively working with him to consider the cost of doing so.  I pointed him to the Bible and a local church also.  This one really warmed my heart.  Praise God.

Ironically, my very next chat was with another Hindu guy from India, but who was deeply resistant!  Some accept, some reject - that is out of my hands.

An Irish guy who’s mind was “blown” (in a good way) at hearing the gospel.

The last chat I’ll mention was a half hour one with a guy from the Netherlands.  A “Christian”, but full of doubt and troubles.  It was 5:30AM for him, and he was very tired and not taking it all in, but I laboured with him on his questions.  This guy touched my heart, and I pleaded with him to read through needGod.net once he had slept and to reach out with questions - this is so important.  I said I would be praying for him.  And I will.