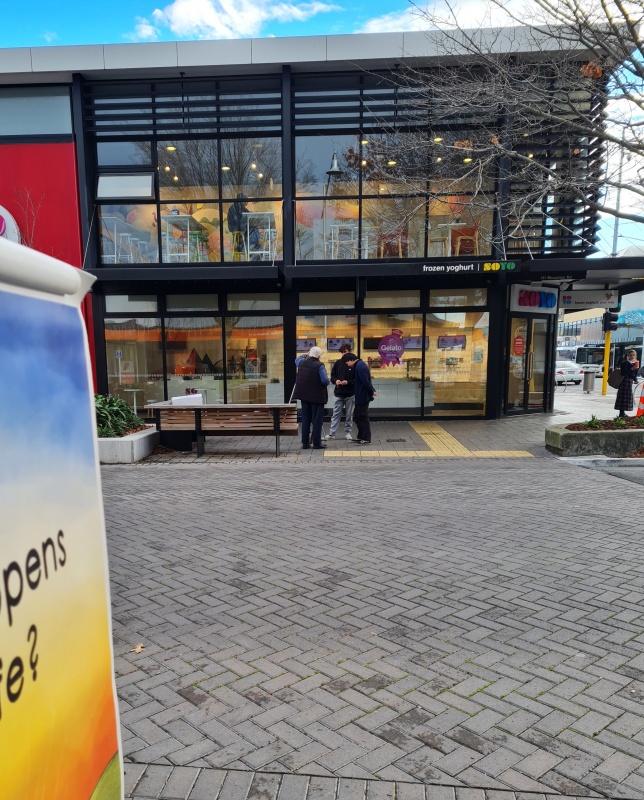 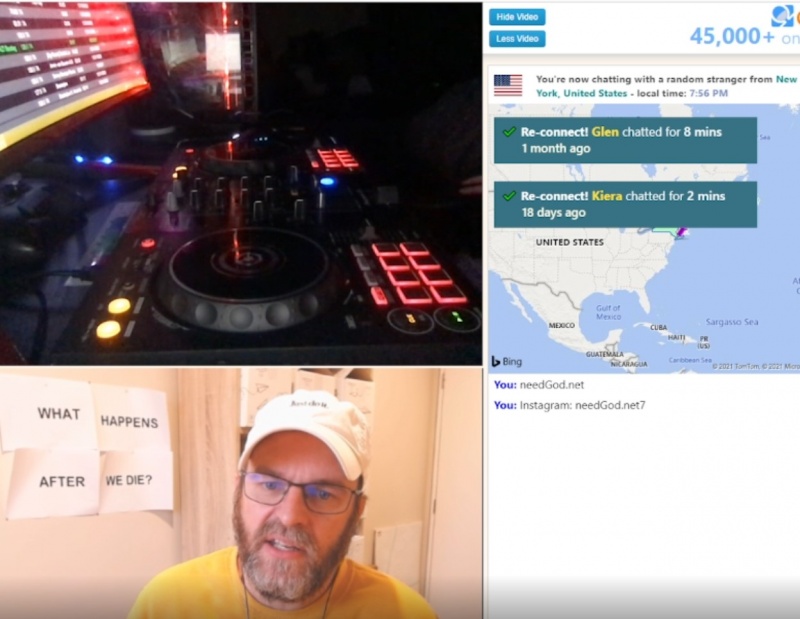 4 hours online - 6 chats for a total witnessing time of 2 hours and 59 mins & a total time in decent chats of 2 hours 36 mins - an average of 26 mins per chat.  All but one of those chats was with people in the USA - the other guy was in Colombia.

I had a completely non standard, yet fascinating 5 min chat with a Muslim guy who instantly picked up on the fact that I was a Christian.  He asked great questions which quickly got to the heart of the differences between our worldviews.  My answers revealed the gospel to him - although I have no idea if it was taking hold because he had a customer walk into his shop and he had to go.

A follow up chat occurred with a guy I had talked to a month ago (for 8 mins), and who Kiera had talked to 18 days ago (for 2 mins).  He must spend a lot of time here like us.  He is a DJ (pictured) and also a paramedic.  He had a Catholic background and stubbornly held to his self righteousness as I laboured with him.  Yet this time he lingered in the conversation - we chatted for 25 mins this time.

The chat with the guy from Colombia was one of the longest I’ve had, 1 min shy of 1 and a half hours!  A Catholic background, which he is rejecting - yet he can’t deny a creator.  He seems to be searching and so he very much appreciated the conversation.  Multiple times it would seem that he had grasped the gospel, and then checking questions of one kind or another would raise doubt in my mind.  By the end of the conversation I couldn’t be sure he was grasping it.  What was making the conversation longer / harder was that his English was at about 95%.  I sometimes had to engage Google Translate to clarify things.  I was absolutely exhausted after this chat.

My mind is blanking on who I talked to in Riccarton.  The one thing I remember clearly is 3 guys going past and stopping to engage for a few seconds before 2 of them decided to move on, taking tracts.  As the 3rd guy took the tract, he stopped and wanted to talk.  Questions were in his eyes.  Sadly, he looked back and saw his friends waiting across the street for him - he had to go.  I told him to read the tract - he said he would.

I remember, now, my first conversation was with two high school students who were Chinese.  I was impacted by the fact that one of them had never heard about Jesus.  I was struck by the reality of how secular our society is becoming for that to happen.  Sadly, they heard the gospel for the first time from me.

I know Roger was busy across the street.  At one point he had a large group of high school students surrounding his flip chat - 9 of them?

I was feeling very unusually tired on Wednesday.  I really had to fight to be able to maintain conversations with people.  At one point I just couldn’t muster the energy to engage, skip after skip started occurring.  I reached out to Matt and let him know how I was feeling.  I could tell he was praying for me, because my very next chat was different.  I felt like I was back to my usual self.  After that chat I asked Matt if he had prayed for me.  Indeed he had.  I feel like I’ve got a lot to learn about effective prayer.

The 22 min one was with a kid with a Catholic background who now called himself an Atheist, yet the very first thing he said, when he read the question on my wall: “What happens after we die?” was, “that is a great question”.  He opened up to the logic of the gospel, and then became resistant as he understood the implications.  Yet it was a great chat.  I had to rush the gospel at the end, as his mum had a limit on his WiFi access which was running out.

The 45 min chat was great.  I highly suspect I was talking to a false convert and the chat ended up focusing around precisely how we go to heaven.  He really engaged, and admitted his Dad was concerned about his ‘faith’.  I told him that his Dad was probably praying for him, and that it was no coincidence that we had paired for this chat.  He is now articulating how we are saved well.  I encouraged him to start reading his Bible daily and to engage in his local church.  It was a great chat to finish the day!

I’ve now survived writing this report and am ready for bed.  Please keep praying for stamina in this gospel work.  SDG