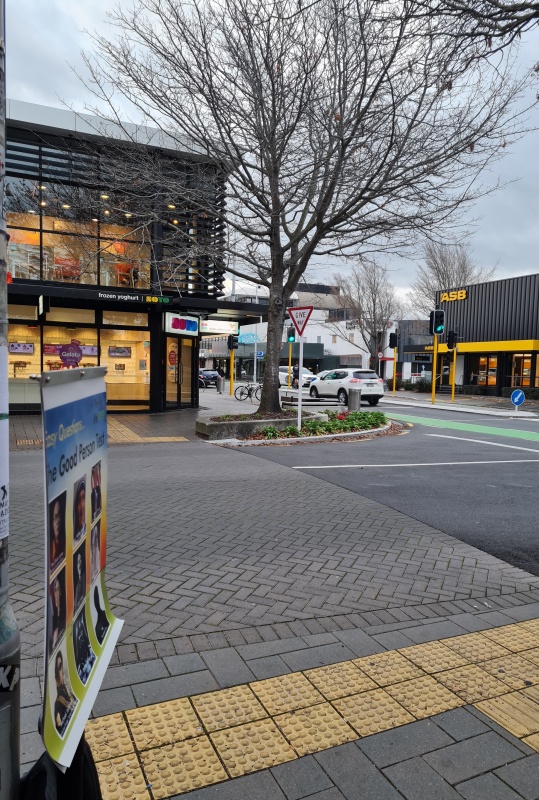 We have moved into winter in Christchurch.  The Summer of special outreaches has finished, and we are planning for the next summer at the moment!  But in the meantime, we continue to plod in our daily job of gospel ploughing and sowing.  What a privilege it is to serve the Lord in this way.  And I’m so thankful for all you who are working alongside us in prayer!

I’m going to give an update on the last week on the street, which included five outreaches across three locations: Central, Riccarton and Upper Riccarton.

But first, I found something I wrote recently that I want to share.  It was obviously after a good chat I had, probably online:

Sometimes we get so used to what we do, that we forget the significance of what we are doing.  The gospel really is the power of God for salvation.  It's so amazing we get this privilege to tell people about him.  I'm so overjoyed after that chat.  Those kids were soaking in the gospel and asking so many wonderful questions.  But I can't save them.  God, please change their hearts for your glory alone!!!!!!

On Friday, Roger, Andy and myself were in central Christchurch.  First street outreach of the winter, and It was cold!  I was glad to be wearing thermals and all my other layers! :)

Andy told me later that he had a follow up with a guy he had previously witnessed to at the bus stops.  They went into a coffee shop where it was warm for a follow up gospel conversation. :)

Roger faithfully manned his flipchart near the bridge of remembrance.  He said he had at least 3 solid conversations.

I decided to roam.  And I spent most of the two hours of the outreach in three solid conversations.  They were awesome!

The first was on Cashel Mall, with two brothers with Catholic backgrounds.  They came to understand the gospel, and one of them even asked which church I was at - he said I might see him there on Sunday.  Sadly, he didn’t turn up.  Yet God was glorified in my obedience to share.  And the gospel is still the power of God for salvation!

I moved on to Cathedral Square where I asked two passers by what they thought happened after life.  Well, that conversation went long.  One of them was a Biochemist and leaning heavily towards Atheism.  It was one of the few times that I relied heavily on my knowledge of creation apologetics.  It was a very stimulating conversation, where the law and the gospel was shared.  By the end of the chat, there was no noticeable shift in the position of the Biochemist (you can lead a horse to water, but you can’t make him drink), but the other guy seemed impacted, and he carefully accepted a tract and slipped it into his bag.

Moving on through Cathedral Square, I handed out tracts, and was surprised at how many were accepted.

I ended up back at the bridge of remembrance where I got into my third and final chat.  It was with a couple I wasn’t expecting to stop.  The girl played devil's advocate - no problem with me, because, when you are relying on the truth, the answers always stack up.  They both left accepting tracts.

On Saturday, I was in Riccarton at lunch time and then in Upper Riccarton in the evening to test a new outreach location with Mike and John.

It was a bit slow in Riccarton and then I suddenly hit a stretch of three conversations, each rolling into the other!

The second one was a follow up chat with a guy I hadn’t seen for a long time!  It was so good to see him.  He is still articulating the gospel, but, sadly, I’m not seeing any fruit of salvation in his life.  I gave him my contact # and hope to see him again soon to be able to continue labouring with him in the gospel.

The third one was also a follow up - with a young man who is now professing faith, and he even said he has almost finished reading John in the Bible.  Sadly his work schedule stops him from being able to come to either the foundations Bible study my church runs, nor our regular Sunday gatherings.  I continue to pray for him.

One of the final encounters of the outreach was with a lady who seems to have become mixed up with some conspiracies.  She was using biblical lingo, but completely missing the gospel.  She just wanted to rage against the culture and was even thinking about what happens after life.

In Upper Riccarton, on Saturday evening, I had an opportunity to engage three young guys with the gospel.  Sadly, one of the guys claimed to be a Christian, and yet, he didn’t understand the gospel at all.  The conversation didn’t flow too well, because they guys kept getting distracted.  But, I made the most of the opportunity, and they all left with tracts.

Sunday I was back at Cashel / Colombo corner with Susan and Binu.  It’s cold enough now that Susan gets me to set up the flipchart on the eastern side of Colombo Street - in the sun! :)

I was so encouraged to see Susan running the flipchart with a group of young guys at one point.  Yet, I was so busy in my own gospel conversations.

Firstly, and had a great chat with two young Indian ladies, who followed along the gospel presentation flawlessly, and came to grasp the great significance of Jesus: our only hope for salvation from our sin and hell.

I then moved into a long chat with a young man who wasn’t interested in a tract, but decided to answer my question: ‘what do you think happens after you die?’  He didn’t seem very engaged, and yet, he stayed.  He was fairly hard soil, and so I laboured, for the glory of God alone.

Tuesday (yesterday), I was in Riccarton.  Two chats stand out in my mind.  The first was with a young man who loved history.  He knew about Viking gods, and Egyptian gods.  But he didn’t understand the gospel.  It was my privilege to share it with him.  Later, another guy stopped, he heard the gospel and seemed really impressed.  He asked about my church and accepted a contact card.  He said he needed time to process what he had heard - which is fair.  But he also understood that the message was simple enough.  I pleaded with him to trust in Christ, after counting the cost of doing so.

This only covers the work on the streets.  I’ve also been busy sharing the gospel online, and planning the next summer of outreach.  Again, I feel so privileged to be able to serve the Lord in this capacity.  Long may it last.  Thank you so much to all those that donate to enable us to continue in this ministry the Lord has put in front of us.  We ultimately trust him along for all our provision.  All glory to Him!