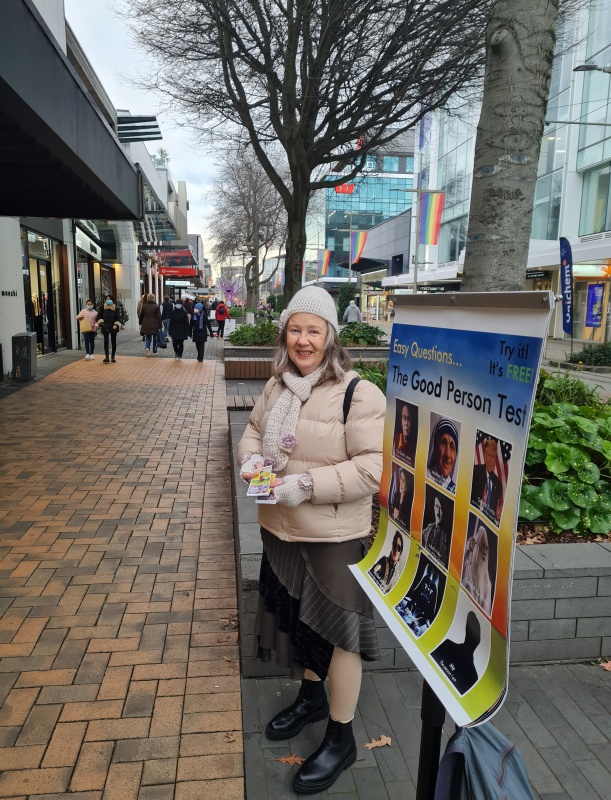 I’ve been very encouraged to hear that people are reading these reports and are finding them encouraging.  Glory to God alone.  May you be encouraged for the evangelism opportunities that come up day to day, may you take those opportunities to swing a conversation to the deeper questions of life and share the gospel.  Maybe you would be able to join me on the streets some time?  I’d love to have you with me :)  Or maybe you don’t live in Christchurch and, like me, are desperate to see God glorified in your community and beyond.  Be encouraged to, with the support of your church, go to a busy local street corner and start handing out tracts (you can get them for free here, here, or here), and start conversations.  God will honour our obedience.  You might think you can’t do that.  Well, I used to think that too, but then I discovered I could do it, and you can too!  Be encouraged as you read about how my week, doing exactly that, went :)

The rain was really heavy on Tuesday, so I made the decision to stay home and work online instead.  But although it’s been cold, the outreaches on Friday, Saturday and Sunday went ahead.

John, Roger, Andy and I were in our usual spot at the bridge of remembrance on Friday.  I was first there, and I noticed some JWs there with their stands - I haven’t seen them out for a long time!  I went over to say g'day.  During the brief chat I let them know I was a Christian out to share the gospel - but I wasn’t going to try to engage them in debate.  I let them know we’d have our own stand up soon (Roger).  After a cheery farewell, I headed to the other corner and proceeded to actually attempt to engage people, and within a minute, I was into a gospel conversation with a young couple.  They heard the gospel, and took tracts, but they had to move on.  Romans 1:16 - I leave them in God’s capable hands.

By this stage Andy and Roger had arrived.  Roger set up his chart, and then I decided to go for a wander to see who I could talk with.  I had barely moved down Cashel Mall when two young ladies stopped to chat.  Apparently they had been at some protest in Cathedral Square.  Ignoring that, I swung the conversation to the most important issue: what happens after life.  One of them had studied religious philosophy and uni - so I asked her what Christians have to do to get to heaven.  I wasn’t surprised when she said, “be good” – wrong answer!  So, I corrected her, and then moved into the building / builder analogy.  She was impressed by that.  But, sadly, she wasn’t interested in continuing the chat and needed to go.  Both girls accepted tracts as they moved on.

I made it down to Colombo street, but the fish weren’t really biting down there.  I saw the two girls again, and they said the protest was over - so I decided to go in that direction.  I spied some people sitting on the seats on High Street, so I bee-lined over, the first guy didn’t want to chat, but the two guys further on were keen.  I had a long chat with both of them (I’d say they were high school aged on school holidays, and so had the time).  They both came to grasp the gospel, and even made professions - so I got them to consider the cost of the gift.  And pointed them to the Bible and a good local church.  I left them with tracts which gives them a way to get in touch.

The Square was fairly empty, so I made my way back to the bridge of remembrance, handing out tracts as I went.  I was pleased to hear that Roger had been busy in conversations.  And Andy and John were talking to a small group.  So good!  I was able to have a couple more conversations before the outreach ended in a time of prayer.

Saturday’s outreach was amazing!  The sun was out and melted the frost.  It was so good having Mitzi join me again in Riccarton.  I had the “good person test” flipchart up, and it attracted a lot of attention.

But first up, I had a guy come over and say, “Hi Glen!”  I didn’t recognise him, but he explained that I had talked to him and another lady a few weeks ago - I remembered.  They were keen to go to a church after that chat, but he said they hadn’t followed it up.  I was able to check his gospel understanding (he got it right!) and then I gave him a card for my church (he lives close) with my contact details on it.

After that it was busy.  My prayer was that Mitzi would have some good opportunities to see the whole flipchart used - and God answered that prayer multiple times :)

The outreach ended with 3 different guys standing around the flipchart in gospel conversation.  The first guy is a regular heckler, who has mellowed out a lot lately.  He is asking really good questions, which is a really encouraging sign that the Lord is working on his heart.  And, he wasn’t interrupting the gospel conversation I was having with the guy next to him - instead just listening and soaking it in.  The guy next to him was claiming to be Christian, who had been an Atheist a year ago.  As he left, he paid me a huge compliment.  He said he had learnt more in our 15 minute conversation, than 5 years of religious education at high school!  Glory to God alone - the gospel really is simple, and the Bible answers all the questions that need to be answered.  The third guy in the mix joined the conversation part way through.  He was happy to just listen.  He actually left first!  But not after telling me he was from the USA and currently at the uni in Christchurch and looking for a church – he also left with a contact card for my church.

Sunday was cold.  So good to be at my church gathering in the morning (sadly none of the people I talked to on Saturday turned up - but that’s okay, they are in God’s hands), and a shared lunch after, before heading back to the city for outreach in the afternoon.

It was a bit slow in the city initially.  When Susan arrived, we decided to move down the mall a bit to set up the flip chart.  I had an awesome follow up opportunity from the week before, and an epic chat with a trio of girls – one in particular was very engaged and followed the logic of the gospel perfectly.  She was stoked!  I had some other chats as well.  Glory to God alone for any eventual fruit from the ploughing, sowing and watering.