“CHINA, CHINA, FREE TIBET, FREE TIBET!!” They were the cries I was met with as I crossed the road and entered into Garema Place. In front of me I could see the brightly coloured flag of Tibet, and the large signs of the protesters. “China OUT: FREEDOM” seemed to be the cry on everyone’s lips, and as I made my way to the merry-go-round I couldn’t help but think that the freedom theydesire is not the freedom they so desperately need. The Tibetan protesters were after a temporal freedom, but they were completely unaware of the eternal freedom they lacked, and that they would need in the years to come.

As I walked I mediated on the John 8:34-36, “Jesus answered them, “Truly, truly, I say to you, everyone who practices sin is a slave to sin. The slave does not remain in the house forever; the son remains forever. So if the Son sets you free, you will be free indeed.” (ESV), My prayer for today was that God would be abundantly kind to sinners, and grant them freedom in Jesus.

As I neared the merry-go-round, I was met by Ji. It was good to see that I wasn’t going to be the only one out witnessing today. Since we didn’t know if anyone else was coming we decided to wait and watch a busker paint for a bit. To my surprise this busker was familiar to me, he was a heckler of mine from Brisbane. It was good to see him, although it was sad to see that he was still very much unconverted. 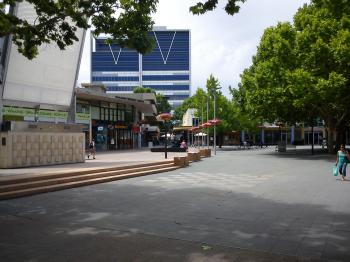 After waiting for a time we decided that it was time to head off and do some walk up witnessing. It was just the two of us today, so we decided to stick together. Ji soon approach a couple of young people who sitting where the Tibetan protesters had been, handed them a tract, but it soon became very clear they weren’t interested in talking, so we made our way to another man, whom Ji managed to get into a good conversation with.

As Ji witnessed to this man, I decided to hand out a few tracts. Not many people took tracts, and there seemed to be a real apathy to anyone wanting to do anything, I looked around Garema Place to see if I could spot someone to witness to. It was then that I spotted a man about 150 metres away, he was dressed in black trousers, white shirt and was wearing a tie, this immediately triggered something in my brain, my first thought was, “This is a Mormon missionary trying to deceive people”, as I watched him a bit more, I noticed the black name tag on his pocket, this confirmed my suspicion, so I made my way towards him in order to engage him in conversation.

When I neared the Mormon missionary, he turned and began to walk away at pace. As he walked away he would go up to people, try to force something in their hand, then walk away quickly. This he did for about 700 metres. Finally, I was able to catch him up, and as he approached me I greeted him, and began a conversation.

The missionary was friendly, and very young. We began by chatting about general things, such as the weather, Canberra and where he was from. It turns out that this white Mormon missionary was from mainland China, and for 18 months he had been in Australia on mission. We spoke briefly about persecution of religious groups in China, and he said that the Latter-Day Saints were persecuted as they refused to proselytize.

The conversation then swung to the spiritual and we began to discuss the person of Jesus. I informed Elder Y---- that I was a Baptist minister, and that I was interested in learning what he believed, so we sat down on a park bench and he began to explain to me what the Latter-Day Saints teach. For about five minutes he spoke, reciting from memory the Mormon doctrine that I had heard so many times from different missionaries. He spoke about how they believed God had restored the only true church through Joseph Smith, and how once you die you have a chance to be forgiven if you would accept Joseph Smith as a prophet and believe the Book of Mormon.

He then went on to talk about the nature of God, and it was during this time that he began to “attack” the doctrines that the Christian church holds to. He questioned the Trinity and stated that the concept was false, and how the Mormons knew that God had a body, as did Jesus. It was at this point I stopped him, and asked him to explain to me what he thought the doctrine of the Trinity was. Elder Y---- paused at this, he wasn’t quite sure what Christians believed in relation to the Trinity, all he had been told was that we were wrong.

After thinking for a bit, Elder Y---- gave this definition of the Trinity, he said, “Christians believe that the Father, Jesus, and the Holy Ghost are one God, in one body.” I pointed out to him that what he had just presented was known as Modalism, and it was a heresy that had been denounced by the Church for 2000 years. Elder Y---- seemed shocked, and he asked me to explain the doctrine of the Trinity. I presented to him some basic Biblical arguments, and then he said, “That makes sense, I can see where you get that from.”

We then moved on to a different topic, and this was the topic of Jesus Christ, who He is, and what He has done for sinners. Elder Y---- declared that to be saved we must, “1) Have faith in Jesus; 2) Repent; 3) Be Baptized; 4) Receive the gift of the Holy Ghost; 5) Endure to the end.” These five steps according to Mormonism was all anyone has to do in order to be forgiven.

Seeking to clarify what he meant I asked him, “So, what you are saying is this, I must do something to be saved? I must have faith and works?” To which he agreed by saying, “If you don’t do something, you won’t be saved.”

This statement didn’t surprise me, as all Elder Y---- was doing was saying what the Book of Mormon says in 2 Nephi 25:23, "For we labor diligently to write, to persuade our children, and also our brethren, to believe in Christ, and to be reconciled to God; for we know that it is by grace that we are saved, after all we can do."

I then asked Elder Y---- if he had his Bible on him, he didn’t so I pulled out my iPhone and opened my “Mormon Scriptures” app. I turned it to Ephesians 2:8-9 and asked him to read it, as he read the text from the King James Bible (the Bible the Mormons use) you could see the light go on, he realised that he had an issue to answer. The text reads: “For by grace are ye saved through faith; and that not of yourselves: it is the gift of God: Not of works, lest any man should boast.”

As he read it, I asked how both statements can be true, how can 2 Nephi be right, if Ephesians 2 is correct? Elder Y---- got out his notepad and pen, and began to write the verses down. I then encourage him to look at Titus 3:5, Romans 5:1 and all of Romans 4 to see that salvation is a gift from God. When I said, “Salvation is a gift from God”, he replied, “Yes, but we must repent, that is a work!” So I took him to 2 Timothy 2:25 and showed him that repentance is a gift from God also.

From this point I was able to explain to Elder Y---- that the Gospel was all of grace. I showed him from the Scriptures that we had sinned, I pointed to our judgement, then I pointed to Jesus who died for the sins of His people. I then went on to talk about 2 Corinthians 5:21 and how by the work of Jesus we are counted as perfectly righteous, that we have His righteousness imputed to us, as a result, we don’t have to work to make ourselves right, as in the eyes of God we are perfect in Christ.

Elder Y---- was silent, and he didn’t quite know how to respond, but then he began to fall back into the training he was given. He used the argument that “The Bible had errors in it, it wasn’t translated correctly. So I asked him, “If the Bible is translated incorrectly, and the LDS church knows where the errors are, why haven’t they fixed it? Moreover, why do you use the King James Bible if it has errors in it?”

Elder Y---- had nothing to say, but just said, “I don’t read my Bible much, or the Book of Mormon, but I’m told they are both God’s Word.” At this point I put a question to him, I said, “Is God perfect?” Elder Y---- replied that God was indeed perfect, so I said, “Does God make mistakes?” Again, Elder Y---- said God couldn’t make mistakes, so then I asked, “If the Bible is the Word of God, and if the Book of Mormon is the Word of God, then surely they shouldn’t contradict themselves, right? They would flow in perfect harmony.” He agreed with this statement, so I asked, “Why then does the Book of Mormon contradict the Bible?”

So I asked him, “Where was Jesus born?” Elder Y---- replied, “I don’t know.” To which I said, “Do you know where the Book of Mormon says Jesus was born?” Again, he stated he didn’t know.

At this I opened the Book of Mormon on my “Mormon Scripture” application to Alma 7:10, “And behold, he shall be born of Mary, at Jerusalem which is the land of our forefathers, she being a virgin, a precious and chosen vessel, who shall be overshadowed and conceive by the power of the Holy Ghost, and bring forth a son, yea, even the Son of God.”

“Where was Jesus born?” I asked, “Jerusalem” came the reply.

Then I went to Matthew 2:1, “Now when Jesus was born in Bethlehem of Judaea in the days of Herod the king, behold, there came wise men from the east to Jerusalem,”

“According to the Bible, where was Jesus born?” Elder Y---- was silent, then said, “Bethlehem”, “Can Jesus be born at both Bethlehem and Jerusalem? Did God get confused at where His own Son was born?”

I then went back to 2 Nephi 25:23 and compared it to Ephesians 2:8-9. Once again I stressed the Gospel, and pointed out that both the Bible and Book of Mormon can’t be correct, one has to be wrong. Elder Y--- agreed, and said, “I’m doubting the Book of Mormon, maybe it’s wrong.”

At this he said he had to go, but asked if he could have my number to call me. I gave him my number, and also a in-depth tract explaining the Gospel. Please pray for him that God would open his blind eyes and allow him to see Jesus.

After this I made my way back to Garema Place, and found that Ji was still witnessing. The rest of the afternoon was spent with us talking to people about Jesus, and the day finished with a discussion with a Jehovah Witness who was out handing out material. He had very little knowledge of what they believed, and even admitted to not believing it. I challenged him from the Scripture that Jesus is God, and He is to be worshipped and adored. I explained to him the Gospel, but this man flatly rejected it, and desired to stay in the error of the Watchtower. Please pray for him also.