It was another great night of ministry this past Friday, much to be thankful for! The Lord is a good God, and to be used by Him for the glory of His name is an amazing privilege indeed.

The team on Friday was Kofi, Kwabena, Kwadwo, Winston, Lauren, Steven, Annika, Gareth (plus his mate James, who is not a Christian) and myself. It was certainly interesting to have James join us. Gareth did tell him we would be ministering the gospel, yet he was still keen to attend. I think he was curious and it certainly showed. As a good friend to James, Gareth has been a great witness to him, which is awesome.

Click here for a short video intro of the team.

During the open-air preaching it was encouraging to see a good number of people stop to listen. About five minutes in three young guys began to heckle me. They seemed to be in their late teens/early twenties. They threw a barrage of questions at me, to which I answered as best I could. I have to say that I have lost count of the amount of times I’ve said to people, “There’s only one of me, and three of you. I can’t answer you all at the same time.” You have to take control when you preach open-air, of course it’s important to be godly in the way that you speak, but at the same time you must be firm. They moved on after a short while and I was able to address the crowd more fully. Praise God that the gospel went forth! After I finished preaching James approached me and commented on how well he thought I spoke. Receiving praise from others is certainly not the reason we preach, however in this instance it was very encouraging, particularly for the reason of who it was giving the praise. I was thrilled that James came. He heard the gospel during the open-air, he listened in on the conversations we had with people, and I also had the opportunity to speak with him more personally later on in the evening.

Shortly after I had finished preaching, my three hecklers returned, demanding answers from me to 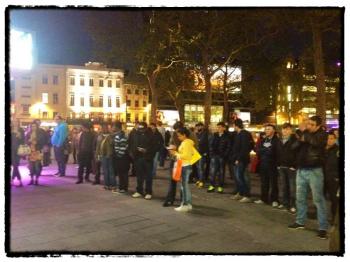 their many questions. One question, in particular, focused in on slave-labour; does God enforce slave-labour. I immediately responded by saying that in no way does the Lord condone the abuse of men or women within the context of slavery. In response, they questioned why I had chosen to wear a Puma top, as apparently Puma clothing is produced through slave-labour in the East. I explained that even if that were so, I certainly do not condone slave-labour. It is terrible to think that there are many products that we use, or wear, in the world today, that are tainted by the inhumane abuse of men and women in their various productions. This is a reality of the world we live in, and in some way or another we all make use of products that come from a very questionable and regrettable source.

It is important to understand that the Bible in no way condones slavery. It does not condone slavery, it simply recognises that it exists. It is the fallen nature of man that compels him to subjugate his fellow man to his will. Having said that, not all forms of slavery in Biblical times looked like the slavery of centuries later. Often it was simply the case of a master and his servant. The servant was still a slave, but the treatment was fair and just. Of course, this was not always the case in biblical times. Abuses were very common. However, slavery in more recent times almost always included heavy physical abuses, and it is to that connotation that we tend to think of when we speak of slavery today. So, with this understanding, we see in the Bible not a condemning, or condoning of slavery, but rather a regulating of it by calling for the highest form of Christ-honouring conduct (See Col. 3:22 & Col. 4:1). The New Testament therefore condemns all abuses of slavery on both sides.

I continued to engage with them, answering different questions along the way. Over time I began to talk more exclusively with Lewis. He seemed far more interested and listened more closely to what I was saying. As I explained the gospel to him it was clear he understood what I was saying, in fact he also accepted many of the ramifications which arise from the gospel (the fact that we are all guilty and therefore deserve justice, etc). I was able to move the conversation in the direction of Christ, explaining why it was necessary for God to become a man. Click here for a brief, but concise, expansion on this subject.

At one point Lewis’ friends tried to pull him away, but he resisted, insisting instead to hear out what I was saying. I was greatly encouraged. 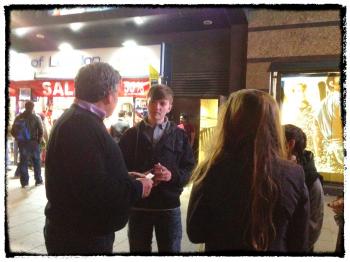 To the left you can see Gareth sharing the gospel. He is really growing in confidence and ability, and it is so encouraging to see. When a young Christian steps out like this to share his faith with others it helps to cement what he believes, it also helps to equip and grow him in his ability to answer objections and defend the gospel. So encouraging! I told Gareth that every conversation he has is preparation for the next conversation he will have. This of course is true for all of us. I would encourage you to step out and share your faith, the Lord is our strength, and even when we are not faithful, He is faithful, for He cannot deny Himself (2 Timothy 2:13).

During the evening Kwadwo had a conversation with Marco, a postmodern relativist (with a Catholic background) from Italy, and Winston spoke with “T,” who showed conviction for his sin and was open to hear the gospel. You can see two short videos of their conversations here and here respectively.

To the right you can see Lauren and Annika sharing the gospel. I was very pleased to see them 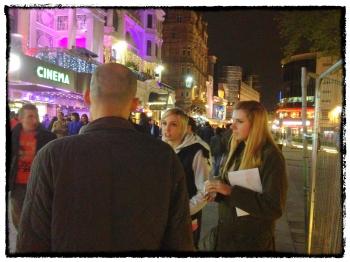 working together, I think it’s helpful and wise for young women to join up, as and when they can, when ministering on the street. Later on Annika had a great conversation with a young man, who is really wrestling with eternal and spiritual issues at the moment. She expresses well her thoughts on that conversation below. As you read, do pray for him.

“...my heart really hurts for this guy please pray that he would be saved!!!

He thinks about whether there is a God, as well as the purpose of life and what is right and wrong constantly. He said: ‘If you had any idea how much I think about this you would think I'm crazy, it's like it's just burning inside me and you can't get away from it.’

He also said he has heard other people’s conversion stories and really wishes it would happen to him so he knows for sure God is real and he can believe.

Said he has considered Islam, as on the outside Muslims really appear to be obeying God and devoted to him.

He said: ‘Please convince me so I can believe it with my whole heart,’ as he was struggling to grasp it enough so that his lifestyle could change.

The funny part was, a club promoter kept coming up trying to pull him away... The promoter then said he was a Christian. John said to him: ‘I'm sorry man, but you say you're a Christian and yet you are pulling people into a club and helping them to sin?? Don't take this personally but you are messed up.’ He then started telling the promoter about sin!

He got my church details, pray that he comes or that another Christian would come along and continue to witness to him. He was so unsettled, this has obviously been on his mind a while.”

As Annika shared the gospel with him, she made it clear that only the Lord can truly convince us. The reason anyone becomes a Christian is because he or she responds to His call, the call to repent and trust in Him. Just as it was with Lydia, when the apostle Paul spoke with her, it is the Lord who must open our hearts, so that we are able to pay keen attention to the message we are hearing (Acts 16:14b).

Pray too for a young man named John, who Annika spoke to. He agreed that he was sinful and that God should punish him, but he would not accept that there was no way for him to earn salvation on his own. This sure is a stumbling block for so many people. It is so important for people to understand that, apart from Christ, there is no salvation for any person. It is the finished work of Christ that satisfies the justice of God. Praise the Lord that it is offered freely to all who call upon His name! (Romans 10:13)

It was definitely a full night of ministry. Much to be thankful for and much to pray for! Click here for a short debrief of the evening.