Had a good day and early evening out and about in Mooloolaba sharing the gospel. It was very busy today with many people  enjoying the fantastic weather.  Brad and I met up and following a time of prayer, we set ourselves up on a street corner and started to pass out tracts. I opted firstly for the Stop tracts. I think they are great because many people just automatically stop    as they see the stop sign picture. They make getting into conversations very easy.

The first conversation of the day was with a couple of older ladies. One lady was quite bossy and very unreceptive to the gospel, and she seemed very keen to not let me speak and to stop her friend listenening to anything I had to say, when I did have a chance. She believed their was no God and anyone who did believe had been brainwashed. I felt sorry for her friend because every time she tried to ask a question her friend cut her off. I pray someone gets to talk with the questioning lady soon. I didn't get chance to get her name as her friend dragged her off.

The second conversation of the day was with Christine. She was a ex-catholic, and had given up on church long ago. She was convinced she was a good person and was definately going to heaven. We had a great chat and it was my priviledge to share the gospel with her. She was convinced her works would get her to heaven, so using the law I showed her that she was in fact a sinner and had fallen short of the glory of God. She was concerned by this but told me God was all forgiving, but I continued and showed her that a just judge would have to find her guilty and judge her accordingly, a just judge could not just let her go. She was visibly disturbed by this, so I went on to share the good news with her. She seemed relieved and was happy to hear the name of Jesus. I asked her when she would repent and put her trust in Jesus and not in her works. She promised me she would think about it.  Please pray for Christine.

The next conversation was with Lloyd. He was older man in his 70's I would think. He said he was very closed to all religion and was happy to quote many atheists and scientists and generally he would close any avenue of conversation. He suggested I didn't use the bible to speak about God. The conversation was long, and in the end I asked him If I could physically prove the existance of God and that the Bible was his word would he believe then. He said no... I asked him if he would let me prove the reliability of the Bible, he again said no. I expressed for a man quoting so many atheits and claiming so called scientific proofs he was very closed to conversation about such things. I left him with the thought that it was in fact God who was in control and it didn't matter which atheist  had said what regarding God, the fact remained that we would all face judgement and on that day we would be judged by God's standards and not ours. I explained all liars would find themselves in the lake of fire and no thief would inherit the kingdom of God, but he rejected this. I decided not to give him the good news but to leave him with the fact that he faced Judegement by a God he knew in his heart existed. He suggested I read more scientific research... Please pray for Lloyd.

Later on I met with some of the church I fellowship and evangelise with on Friday evenings. They were baptizing a new convert to the faith called Daniel in the sea.  Its was great to see Daniel baptized and hear his profession of faith.  Praise God indeed.

We managed to pass out many many tracts and have several good conversations today as well as celebrate Daniels baptism. Many people were closed to the gospel today, but the Lord tells us his word never returns void. Please pray that all that recieved tracts today will read them and all those that heard the message will come to know our Lord and Saviour, and pray some will get baptised on Mooloolaba beach soon.... 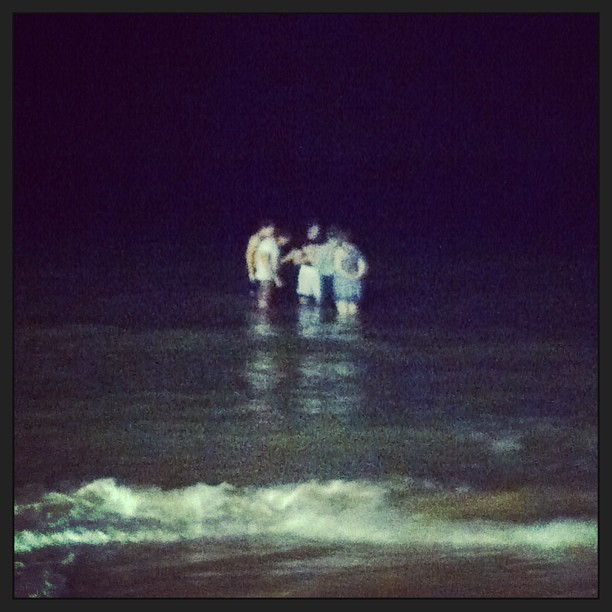 Daniel being Baptised in the Sea at Mooloolaba.