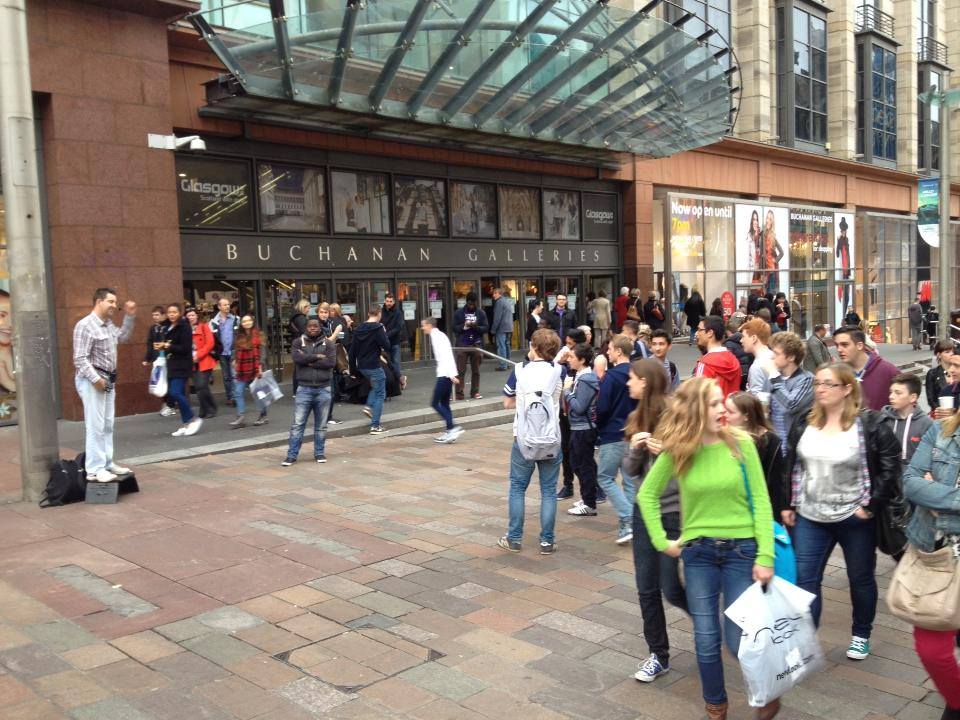 It has been a few weeks since I have been out on the street witnessing. The reason for this is quite simply fear. I have been afraid of hitting the streets again after two arrests. However, today, I headed over to Glasgow to meet up with a few guys for an afternoon of witnessing.

When I arrived in Buchanan Street I was immediately struck with how noisy and busy it was. People were everywhere, and many of the best preaching spots were taken up with buskers. After walking the length of the street, Noman and I found a spot that would serve the preaching well.

Noman was the first preacher up. As he preached I handed out tracts and engaged a couple of people in discussion. During this time two police officers walked past, and my heart missed a beat. But, these officers clearly knew the law, as they allowed the preaching to continue.

During this time a lady approached me to tell me her story. It turns out that four years ago she was on the streets, addicted to drugs and living rough. One day she heard an open-air preacher declare “Jesus gives freedom”. That is all she heard, and she actually scoffed at him. However, that was the seed which the Holy Spirit would use. The lady told me that she could not get those words out of her mind, and eventually it brought her to a place of repentance. She has now completed Bible College and is setting up a ministry to help homeless women. She thought she’d share this with us as an encouragement.

After this I was approached by a man that I had never met, but I knew who he was. His name is Tyler McNabb. Sadly, Tyler is now an apostate. He has forsaken the truth, and followed after Roman Catholicism (James White mentioned him here).

Tyler wanted to know why we were preaching in a different location as he had been waiting for us elsewhere. I knew that Tyler was going to be out that day, but Noman and I decided that we would not fellowship with darkness. After speaking for a few moments, Tyler extended his hand to me. I replied that I would not be extending the right hand of fellowship to apostates.

This set his wife off. She decided to come down and tell me that God is Love and I wasn’t very nice. I replied by pointing out what the Scripture says about apostasy, and how she needs to repent. Tyler interrupted at this point, and said, “I want to have a rational discussion.” My answer was, “I want to have a Biblical one.” With that they left. Please pray that the Lord converts them.

After Noman finished preaching, I stood up to preach. I spoke about how Jesus needs to be lifted high as he alone is Saviour. I only spoke for about twenty-minutes, and then handed over to Craig to preach.

Craig is from Glasgow, so he sounds like the people we are trying to reach. His accent actually drew the attention of the people. They stopped to listen, and some even began to heckle. Craig did a good job in answering their objections and pointing people to Jesus.

Overall it was a good day in Glasgow. Quite a few conversations were had, and many heard the Gospel. Please pray the Lord softens hearts.