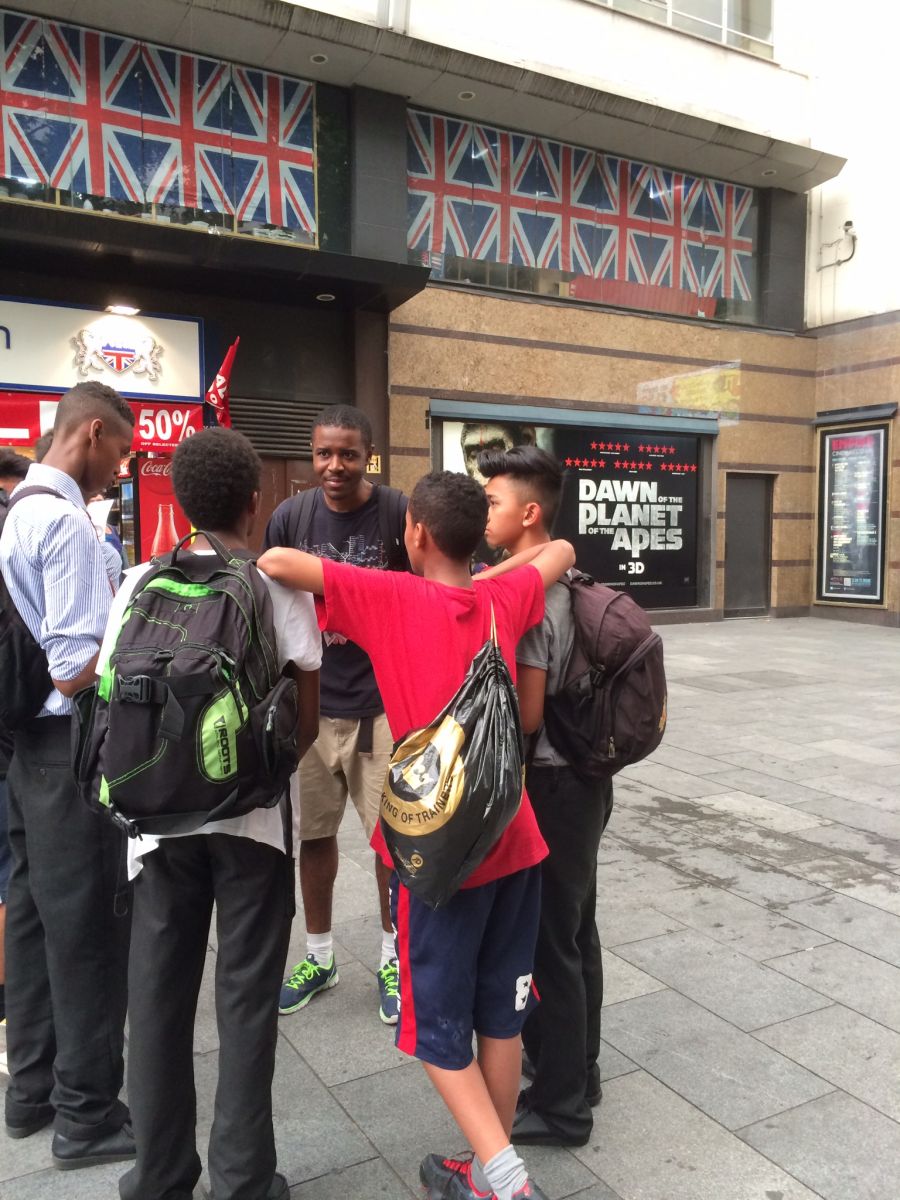 It was only Steven and myself this past Friday evening, but we had a great night, with some wonderful opportunities!

Steven shared the gospel with a group of young lads (pictured to the right), with a young Muslim in particular who listened intently. My first conversation was with a chap named Bernard. He's from India but grew up in a Roman Catholic family. He told me that his current position is that of an agnostic. So we spent some time talking about the Bible and how we can know that it is true. I love these discussions because I know that I can show people that the Bible must be true, indeed is true, because if it were not true all of life is reduced to absurdity. It gives me so much confidence in my witness knowing that there is not one objection that any person can bring that can cast doubt upon the truthfulness of God's Word.

Bernard listened well as I showed how we can know that the Bible must be true. It is true because of the impossibility of the contrary. When the Bible is removed from the equation, all of life is reduced to absurdity. And the reason for this is because the Bible provides a basis — on a moral level, when we speak about logic, the uniformity of nature (which is the bedrock of science), and even truth itself. We spoke about a few of these, particularly morality. I told him that every single day, people make moral judgments by appealing to moral absolutes. Indeed, it would be impossible to make a moral judgment without appealing to moral absolutes — moral laws that are true for all people at all times. However, without God, how do we account for the existence of these moral absolutes? The answer is simple: we can't. Without God, we simply cannot make sense of this world. So why is it then that people deny God? The Bible tells us that man suppresses the truth he knows, in unrighteousness (Romans 1:18), because he loves his sin (John 3:19). That is the ultimate reason. Therefore, God commands us to repent and trust in Jesus — the Son of God who lived the life that we can't live, to be who we cannot be, holy and acceptable in God's sight, and who died on a cross paying the penalty for our sins, was buried, but rose again on the third day, proving once and for all that sin and death had been defeated!

It was great to share all of this with him. And he listened well. He had a lot to think about as we concluded. We swopped contact details and he even asked me to send him something he can read or perhaps watch. I have since sent him a video by Jeff Durbin, pastor of Apologia Church in the U.S., which I think he made find helpful. Please pray for him and and please pray that we can continue to correspond or maybe meet up. Here's the video I sent: http://youtu.be/tBP1f92fezs

I had another conversation with two chaps, one who said he was a Christian and the other who said he was not sure. But he wanted to hear what I had to say so I had a great opportunity to share the gospel with him. Here is the audio from the conversation: http://bit.ly/1kahmI5. It was great! He also gave me his contact details and I emailed him on Saturday. Here is the email I sent him: http://bit.ly/1yWzjNg. This morning I received an email from him with these words:

hey
Thanks for checking out my website, mate that was a great message you shared with us. i have decided repent today and entrust your life to Jesus. What church do you go to i would like to attend sometime.

So encouraging!! I wrote back:

Hey, it might be good to meet up some time just to chat and wotnot. Free anytime next week?

My church is in Tooting, South West London. But that may be a bit far for you to travel, so we could see if there's a church closer to where you're at. Where you based mate? But hey, don't get me wrong, I'd love for you to come along to us one Sunday. I'm just thinking of traveling and stuff.

Please do be in prayer for him!