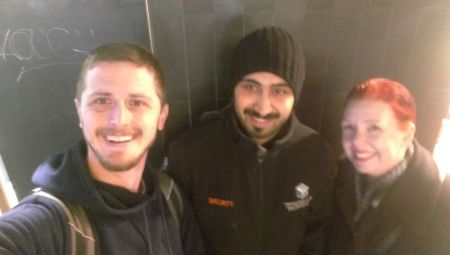 Friday night was the official restart of ministry in the Melbourne CBD.

Though there has been significant interest from people down here in street evangelism, we have struggled for a fair while to establish a regular team. In the past 2 weeks it was decided that team or no team, we would go and start preaching the gospel, even if that meant we struggled for numbers for a while. We stepped out in faith, also trusting that once others hear about the ministry, they will join us.

The first night was just two of us. We grabbed some tracts and started chatting to people. The first good conversation was with Ali who claimed to be a Muslim (pictured centre). Ali was very interested in hearing about Christianity and we were able to step through the gospel with him and leave him with several tracts. He asked for our contact details so that we might continue the conversation later.

Very few people were taking tracts, but after a few minutes we approached a young Muslim girl who gladly answered our questions. Shortly she was joined by another Muslim girl and eventually another Muslim gentleman overheard us and joined in too. We explained to them why they needed a saviour and why Jesus needed to be God to be a sufficient sacrifice for their sins. All three were very challenged by the gospel and each took a tract and a gospel of Mark.

It was not a big start for a new ministry, but we pray that by God's grace he will raise up more faithful labourers to preach with us.