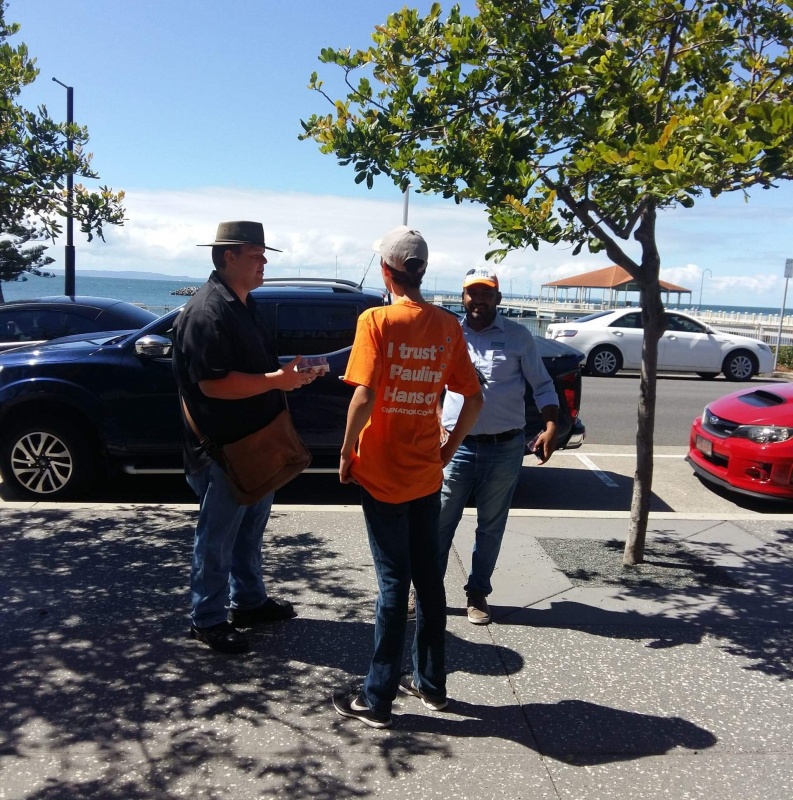 It was a picture perfect autumn day along the Redcliffe waterfront. The sun was shining, a gentle breeze was blowing, and people appeared to be in a good and relaxed mood. For our outreach today, we decided to do things differently. Over the past year we have noticed that it has progressively gotten harder, and that people are showing less interest in Christian things. Due to this, we decided to not set up our “Free Bible and Literature Table” as that would give us freedom to be more mobile in our witnessing.

As a team, there were four of us out sharing the gospel, so two decided to walk up and down the waterfront handing out tracts and witnessing; and two of us decided to stay near the busy walkway along the main road.

The ground was still hard, but the freedom to move made conversations a little easier to come by. The first encounter I had was with a young man who could only be described as being completely indifferent to Christian things. He took a tract while asking, “What is this about?” I answered his question by saying, “It asks if you are good enough to go to Heaven. Have you ever thought about that?” The young man simply said, “I don’t know, and I don’t care. I have never thought about it, and don’t want to think about it.” I asked him why he had such a lack of care for spiritual things, to which he replied he didn’t even care about his existence now.

I quoted Ecclesiastes 12:1, “So remember your Creator in the days of your youth…” to this young man, and urged him to consider his Creator, as one day, he will stand before Him and give an account of everything done in this lie. The young man simply shrugged his shoulders then slouched away.

Not long after this we were approached by an Indian-Australian, who was very keen to talk. The reason he wanted to chat was because he was the local candidate for the One Nation political party. He shook hands and warmly introduced himself. He said he loved what we were doing, took a tract, then walked off. Several minutes later he went to walk past us again, so I called out to him to come over and chat for a few minutes. He readily agreed.

I asked him, “As a politician, what do you think our big need as a nation is?” He replied by saying that as a people we need to get back to traditional values. I followed up on that statement by asking, “How do you define traditional values, and where do they come from?” At first he said these values came from family life, but then he said, “Of course religion, all religions, gave us the values in the West.” I countered that by pointing out that our values and culture stem from a biblical worldview, and that Christianity is the source of the greatness of the West. He agreed with me, but said he was a Hindu. He went on to speak about how we should love and respect everyone, and how Australia would be better if we all did that. I agreed with him, and brought the conversation back to the commands of the Lord Jesus to love our neighbours and our enemies. I then spoke about how Jesus was the ultimate example of love, as He came to serve, to love and to give His life on the cross for all those who believe. I then spoke of the resurrection, repentance and faith.

The political candidate replied by saying, “I don’t really focus too much on religion.” I pointed out that Christ is the only hope our nation has if we ever want to return to ‘traditional values.,’ it was at this point the politician shook my hand, thanked me for talking and then continued on his way. Politics will never solve the issue of the human heart, only Jesus can do that!

During this time, Hanna was engaged in a conversation with a 98 year-old Roman Catholic man, who believed that everyone will get to Heaven not matter what they do or believe. It was sad to see a man at the end of his life still holding onto the lie of universalism. Hanna explained the gospel to him, and stressed that Christ is the only way, but the man didn’t believe it. He did, however, take two tracts. Please pray for him.

The rest of the day was spent handing out tracts, with only one more conversation of note taking place. A man who watched us for awhile came up and asked, “What denomination are you guys?” We answered by saying we are from a variety of evangelical churches, but we are here to share the gospel. The man said, “I was wondering, since I am a Freemason.” Hanna asked him if Freemasons and the Bible were compatible, to which the man said they were. He then went on to talk about the “Grand Architect” who is God.

At this point I joined the conversation. I asked him, “Who can know the Grand Architect?” The Freemason replied by saying, “All those who believe in one god.” I followed this up by asking, “So, if a Muslim joined your lodge, would he be welcome in to serve the Grand Architect even though he would say it was Allah?” The man tried to change subjects at this point, and move on by saying that Freemasonry and Christianity teach the same thing. This claim is completely false, so I pushed a bit harder, I put the question to him, “In your belief, how does someone come to know the Grand Architect, God?” To which he replied, “Through the rites and teachings of the Freemasons, we are the truth and we give light.” At this I pushed back, “Now it is clear that you are the opposite to Christianity, as the Lord Jesus said that He is the truth, and the light. He is the only way to know God, not the Freemasons.” The man was quick to walk away at this point saying we couldn’t know the truth without them. It is clear that that Freemasons are a demonic cult that seek to remove the Lord Jesus from His position.

Please pray for all those we encountered today. May the Lord Jesus save many. 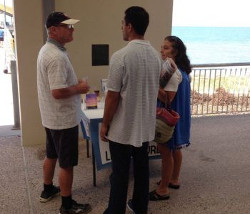