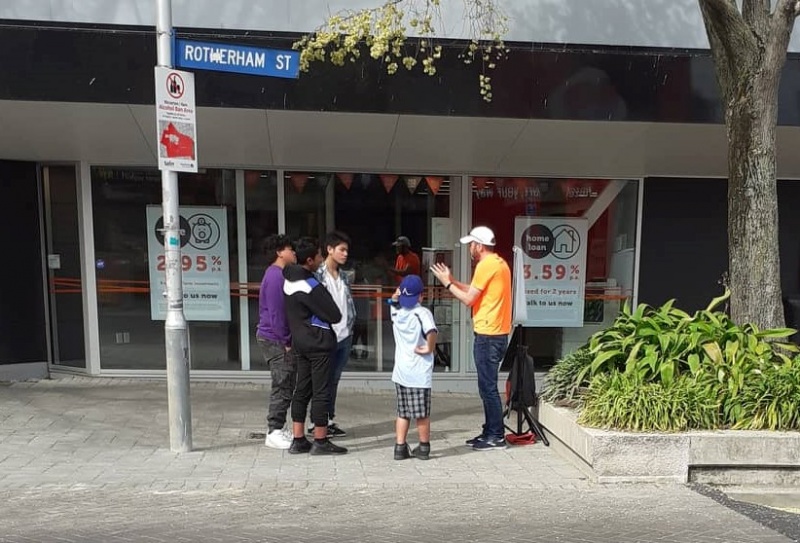 A very busy and encouraging Tuesday and Wednesday of outreach for the Christchurch (NZ) team.  So busy, in fact, that I barely have the energy to write this log!  I don’t know if I’m going to be able to capture the excitement I’m feeling about these days or come close to covering the interesting gospel conversations - I’ll do my best.

Roger and I were at the corner of Rotherham and Riccarton Tuesday afternoon.  It had been two weeks since I was last here where road works prevented me from using my usual spot and I ended up going for two hours without a gospel conversation!  But this outreach was a stark contrast - the road works were complete leaving two improved outreach spots - one on either side of Rotherham Street, and we had a busy time of ministry with many conversations.  Praise God.

The highlight for Roger was having the privilege of sharing the gospel with a Muslim lady who had tragically lost her husband in the Mosque shootings back in March.

For me I had two occasions where I had multiple people wanting to talk to me, but there weren’t enough of me to go round!

On The first occasion I was talking to a lady away slightly from my flip chart, when four teens walked past and start interacting with the flip chart on their own!  The lady took a tract and moved on, and I was able to call the teens back and take them through the chart (pictured).  One of them had done it before (in Cathedral Square), and they all had a good understanding of the gospel having come from Christian families.  But one of those guys still seemed impacted and thoughtful.  They all received tracts.

The second occasion started with a discussion with a very intellectually switched on guy who fired questions so fast I couldn’t answer one before he would be asking another.  Soon after starting my discussion with him, I had two other sets of people stop and want to talk to me too: five people in total.  And they were all firing questions at me - oh for more labourers!  I wasn’t able to hold the attention of all of them, and so the conversation whittled down to the original guy and I.

The way I dealt with the question machine gun he was firing was to switch to presuppositional apologetics: what is our basis for truth?, how can we know things to be true?  And it worked a treat - it wasn’t an angle he had considered before, and it caused him to slow down a little and contemplate more.  As soon as I had achieved that, I tried to switch back to the law and then the gospel - but he was resistant and undercut me by cutting to the chase and articulating a definition of the gospel and calling it God’s loophole!  I didn’t let that go, and did my best to explain that Jesus - the creator of the universe; the King of kings - dying on a cross for unworthy rebels was an unfathomably great cost (how dare he call it a “loophole”!!!).  It was a long tiring conversation!  At one point we even exchanged testimonies.  It was a conversation that could have gone longer - much longer, but he had to go, and I don’t think we were making much progress having covered a lot of ground already.  He left with a “How we know God exists and why it matters” tract.  I leave him in God’s hands.

Wednesday I was in the city.  Cashel Mall was the busiest I ever remember it being.  People were everywhere!  During lunch time I was having constant gospel conversations that rolled one into the other.  I would be finishing up one chat, when another person would step up and take my attention.  I normally take lunch at 1pm, but it wasn’t till 2pm that I got a break from sharing the gospel!  Praise God.

And those conversations were unique and special - each one!  But I’m not going to be able to write about them all.  Here are some highlights:

I had a guy walk past who said he had talked to me eighteen months ago and he hadn’t forgotten it.  I ended up being able to talk to him and his very bright young son, who listened very intently to what I was saying and interjected very insightfully from time to time.  But sadly, the guy had not remembered the gospel!  I did my best to carefully explain it again, and challenged him to respond - he may not get another opportunity.

I had an amazing gospel conversation with a young couple.  The girl openly let tears run down her face as she heard the gospel!  (I think of Romans 1:16 here which I was reading in the morning before heading out.)  But the guy became resistant.  There was a real spiritual battle going on.

A lady came down the mall that I recognised.  It turns out we were at a Christian youth camp together when we were teens!  We had a long gospel conversation.

And as I was finishing up with the lady, a guy walked up to the flip chart.  I thought they knew each other - but they didn’t.  It turns out he had down the flip chart before, and had received tracts and wanted to discuss.

I moved to Cathedral Square to finish off the outreach there, and ended up having some great conversations.  But this is now the longest battle log I think I’ve ever written.  I thank God for the encouragement of these two days of outreach (I really needed it).

People may ask, “but are you seeing fruit?”  Well, yes I am.  I have successfully shared the gospel with all the above people and more over these two days.  That is our task: share the gospel (out of our weakness).  We leave the saving to Him.  Thank you for your prayer and support.  I mean it - thank you!  There was one moment this morning where I was thinking: “someone is praying!”