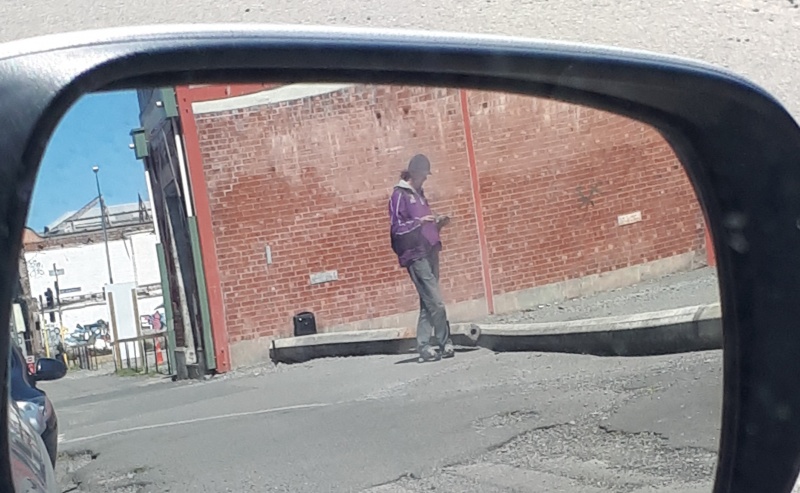 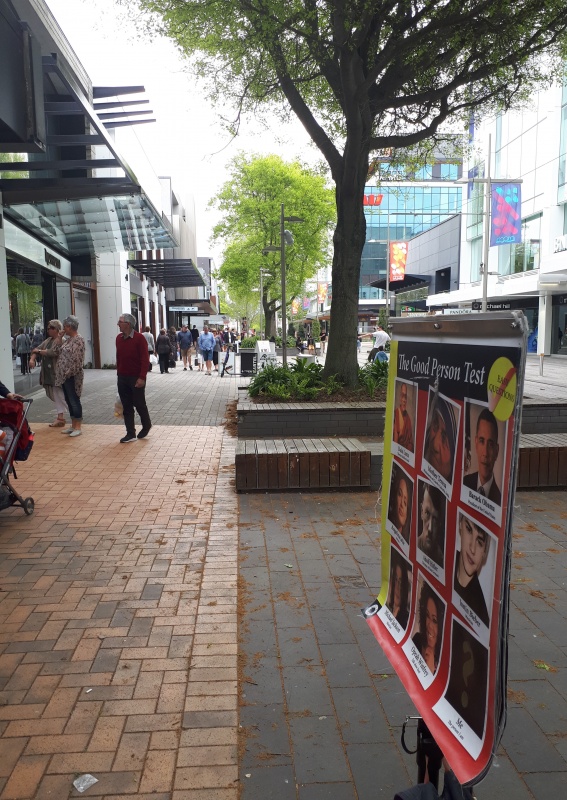 Saturday and Sunday provided good sunny weather for outreach in Christchurch (NZ).  There was an outreach on both days: in Cashel Mall.

Saturday’s outreach started by scouting out the best place to base.  There was a lot happening: an Indian cultural festival in Cathedral Square, and big bands were playing all over the place: even on one of the trams!  There were many people out and about.

During the scouting, I ended up having a walk up conversation with a guy who had only just landed in Christchurch, from the UK, the night before.  He was reserved, but interested, and was willing to give me the time to share the gospel with plenty of context.  He accepted multiple tracts from me before heading off.

I ended up setting up my flip chart on Cashel Mall more towards the Bridge of Remembrance.  There were many people walking past, but not many were taking tracts, and it was difficult to get any conversations started.

But eventually God provided opportunities to interact with people.  Another young man from the UK, who was heading down to help with one of the big bands, came passed and stopped.  He said he didn’t have long, and wanted the thirty second overview of the gospel (not ideal).  So with warning, I proceeded to do that.  Interestingly it hooked him, and we ended up sitting down and talking further.  He ended up staying for about fifteen minutes.  He was a deep thinker, but sadly very resistant.  He had made up his mind on his current path of life - and he wasn’t going to let me distract him.

I was also very encouraged when a guy engaged me suddenly.  It turns out he is a religious education teacher at a Catholic high school, just down from the Northlands bus stops.  The team has many opportunities to share the gospel with students from that school - some even refer to the RE teachers in conversations.  In our short discussion, we agreed that, although we agree on the Trinity, we disagree on justification by faith alone.  Sadly, his wife turned up at that point and he had to go - but I asked him to get in touch so we could talk further.

One of the last interactions was with one of Jehovah’s witnesses - he had just changed guard from their stand down from me.  He wanted to know what I was doing.  I normally don’t make much ground with the JWs I talk to, but I was pleased to be able to explain why all the major differences between our beliefs were critical to his eternal destiny: If God is just, there must be a Hell; our good works will not get us into the Kingdom of God (I pointed him to Matthew 5:21 & 22); and Jesus must be God to atone for sin.

Sunday was very windy - not ideal flip chatting weather!  So the team focused on tract distribution and also walk up conversations.  I had three conversations.

The first was with a teen couple, who said that they were born again Christians, but when I asked them why they would be going to heaven, they said that it was because they were obeying the commandments!  Wrong answer.  So I proceeded to show them some of the ten commandments to see how they did, and I was then able to explain that it was only a repentant faith in Jesus’ sacrifice on the cross that would make them born again.

The last conversation was long, intellectual, tiring, but very rewarding.  After explaining how we know God exists, and that He is the source of our conscience, I proceeded to take them through the law.  She was instantly resistant at this point - but I was encouraged by this.  There was life in this soul!  After avoiding many rabbit trails, I was able to explain the gospel, and then circle back and deal with objections.  Although resistant to what I was saying, she seemed impacted by the fact that I would stand on the street and care enough about people to share.  She gladly took different tracts from me that went into some more details on some of the things we had talked about.  And then she gave me a hug!

The outreach was overtime by this stage, and I was tired.  I’m grateful for the opportunity to share the love and grace of God, but looking forward to rest.