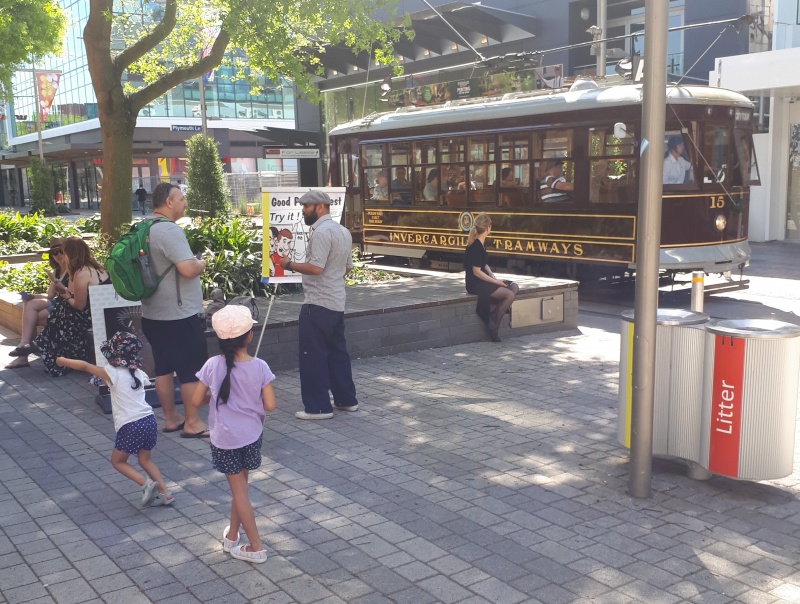 How is it that I’m sitting here writing yet another log entry?  Time is going so fast.  Next thing you know we will be in eternity!

The variable spring weather seems to have passed, and we are having lovely summer days now.  It was nice on Saturday, and nice and hot on Sunday.  Both days we were in Cashel Mall.

Although on Saturday I started in Cathedral Square, but there seems to be a lot more people in Cashel Mall now on the weekends.  There were animal rights activists at the Bridge of Remembrance, Hare Krishna followers down by Colombo Street, so I planted myself in between.  Part way through the outreach, a whole lot of dogs and their owners walked through the mall.  Saturday is turning into a really interesting time to be there!

The most interesting conversation from Saturday was with one of the animal rights activists.  He loved logic and was very keen for a conversation.  But when I used logic to explain how we know God exists.  He became agitated, and then angry - I don’t think he realised how angry he was getting.  He had conceded that there must be a creator of the universe, but he was demanding to know why that creator should be the God of the Bible.  But my answers only seemed to feed his anger.  So I asked him why he was getting so angry.  He said, “you’re not answering my question”.  So I said, “well I don’t want to answer your question because you are getting angry, we seem to be stuck in a loop - maybe we should call it quits?”.  He agreed, and shook my hand before leaving - he had a tract that I gave him at the start of the conversation - and I did actually get a chance to briefly explain the hope of the gospel.

For some reason, his anger deeply impacted me.  Through experience, I’ve become used to dealing with it (it doesn’t happen often) - but from time to time it gets to me.

Sunday saw a team of four.  Jermaine had brought his two daughters out with him, and they shared tracts while Jermaine and I ran flip charts.

Early in the outreach, I offered tracts to a couple who completely ignored me.  But further down they accepted tracts from the kids, and that led them into a wonderful gospel conversation with Jermaine!

But I did have some great conversations.  One is etched into my memory.  I did a simple law and gospel presentation with a guy via the flip chart, and it seemed to be impacting him deeply.  But he was resisting.  He wasn’t convinced that it was true, so I circled back and showed him how he knew God exists and the reality of our sin dilemma.  He finally agreed that it concerned him that he would be heading to hell.  And it was then that I explained the glorious gospel - interestingly he already knew it; but the gravity of it, in context, seemed to be hitting home.  He needed to move on, but when we shook hands, he looked me in the eyes and held my hand for a moment.  He had appreciated the talk.  He accepted a tract.  I noticed some time later he came back down the mall on the other side, and received another tract from one of Jermaine’s kids.  Oh Lord, convict him of sin, and save him for your glory!  May I see him again - in your Kingdom! 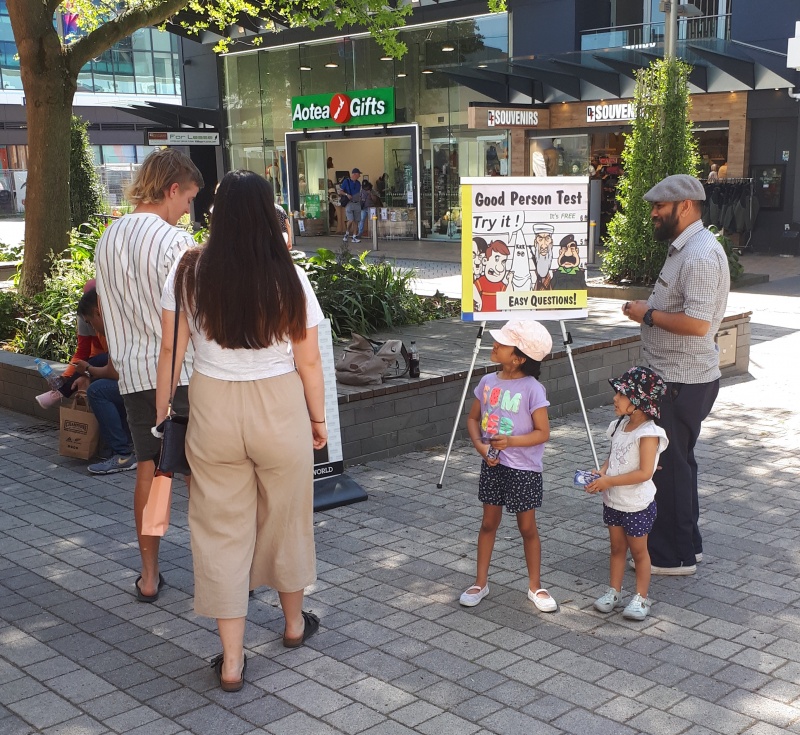 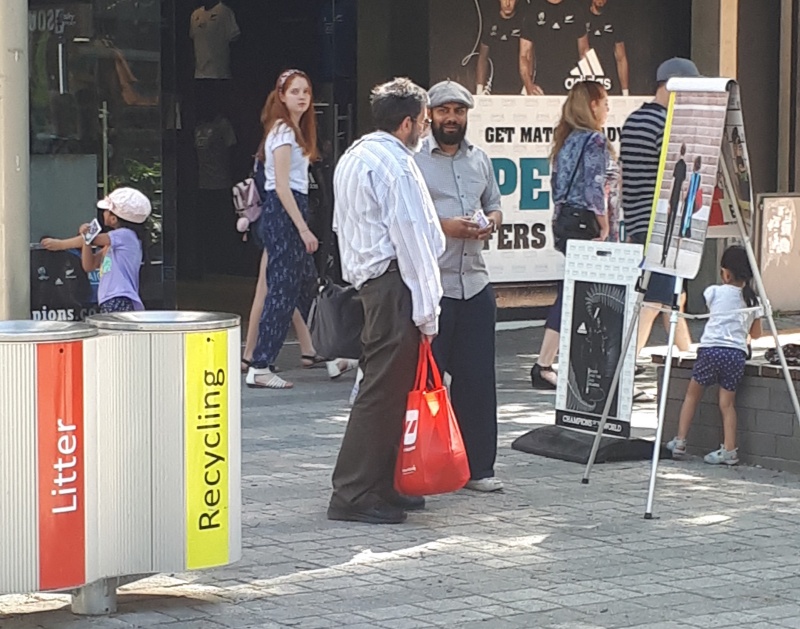 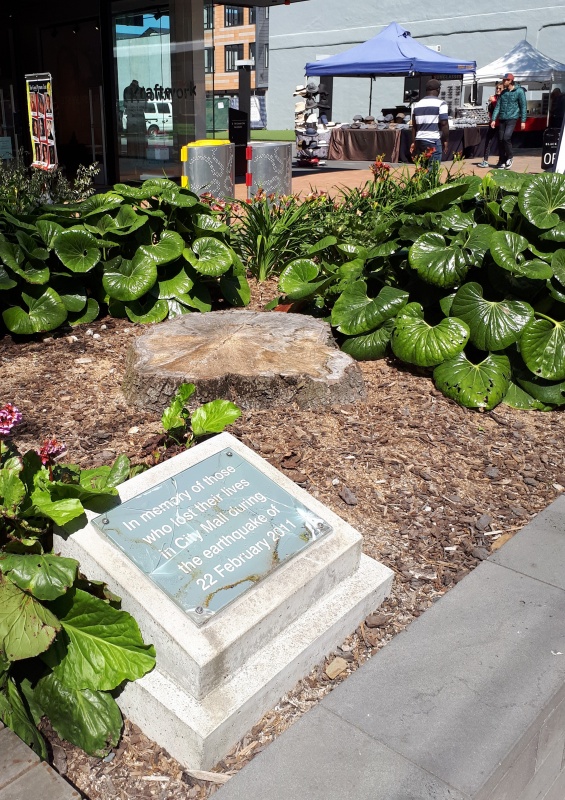 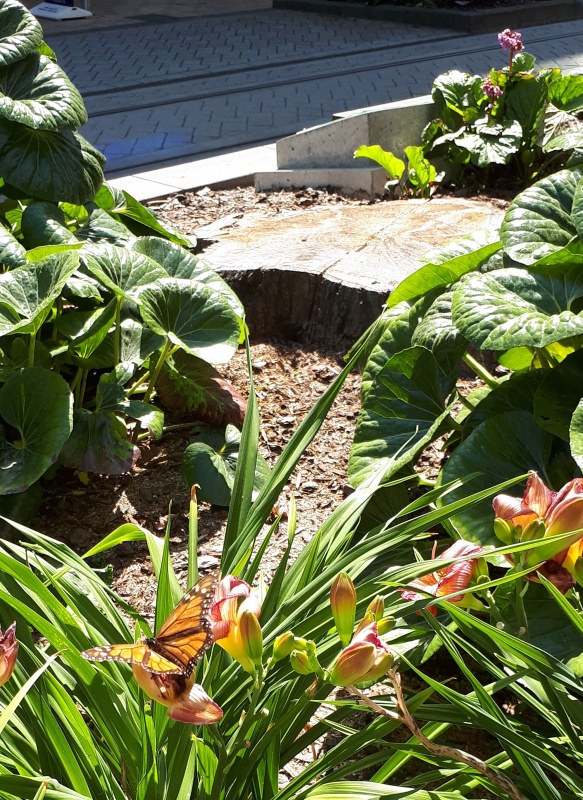