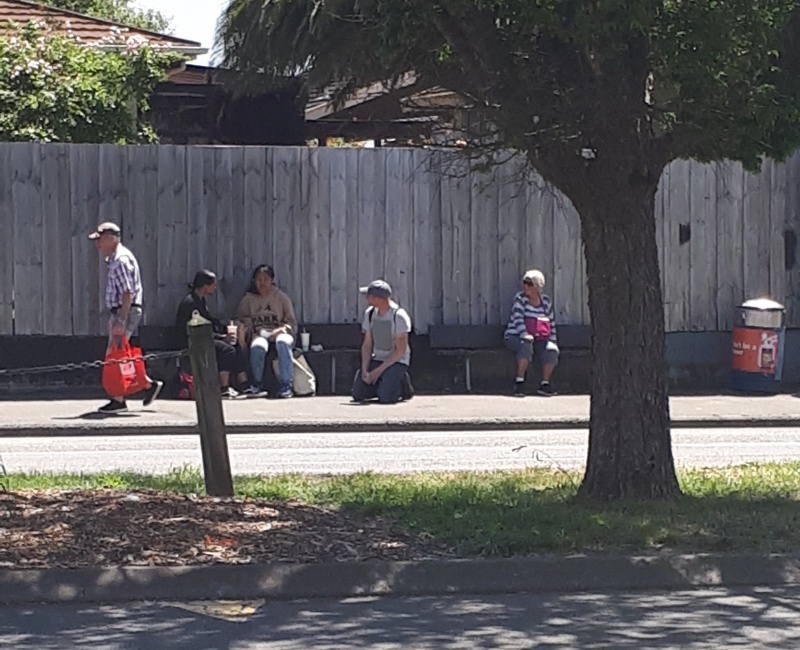 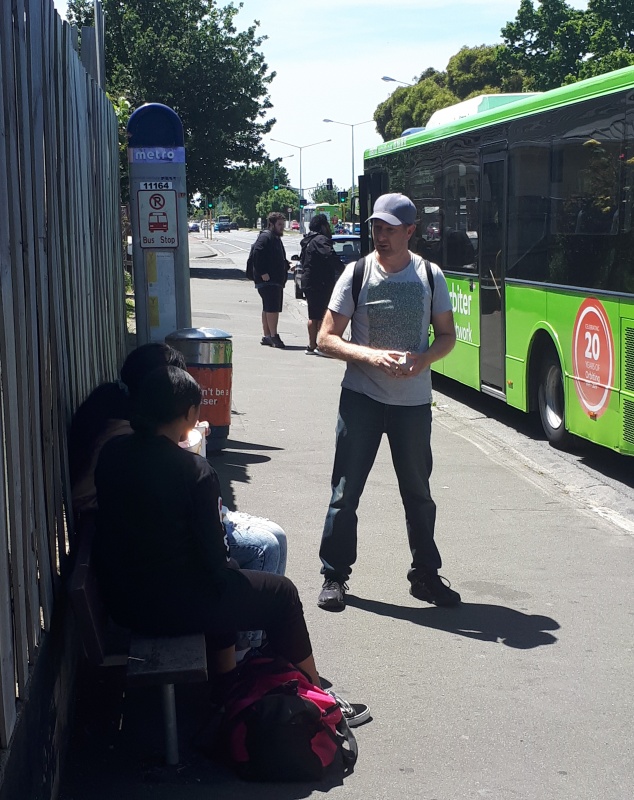 Thursday was hot!  Friday was cold.  And there was much outreach on both days.  Thursday saw an extended outreach at the Eastgate bus stops as well as the outreach at the Northlands bus stops.  Friday we had the Gospel + Abortion outreach in the morning, then open air preaching in Cathedral Square at lunch time, before moving to Cashel Mall in the afternoon, and then an evening outreach in the city.

There were many gospel conversations at the bus stops.  Some highlights:

I approached a lady in a wheelchair and asked her what she thought would happen after life.  She responded saying she was a Muslim.  I warm conversation started.  And, sadly, it turns out that her husband had been shot three times in recent mosque shootings.  He survived.  I was able to express my sympathy and concern, but her bus arrived before I had any opportunity to discuss the gospel.  But she took a silent missionary as she went!

I had an interesting conversation with a young couple.  They seemed to think it was weird that I would want to talk to them.  They asked if I was in a gang.  I said yes: my local church - it’s a great gang to be a part of.  I then asked them if they were in a gang.  The conversation proceeded in a unique way - but I was still able to work thought explaining the gospel until their bus came.  He accepted a silent missionary as well.

The final highlight was a conversation with a young man who had literally finished probation that day.  So the courtroom analogies I was using was hitting home.  He was very engaged.  I’m convinced that he understood the gospel, but he was certainly weighing the cost!  I was encouraged.

I also had an opportunity to follow up with the taxi driver I mentioned a few weeks ago.  He said that you can’t change your religion overnight… so he has not trusted in Christ so far.  I will keep praying for him.

On Friday, the gospel + abortion outreach, outside the hospital, ran as expected.  There were opportunities to share the gospel (although briefly), there was some support, but much opposition.  One lady in particular was murdering me with her eyes.  She didn’t look happy at all!  But at least she has life - unlike the many preborn people who are murdered day after day in our nation.  It is a privilege to shine the light of the gospel into this situation.

I also had an opportunity to follow up (again) with the guy who works in IT in the hospital (I think I mentioned him a few weeks ago).  He was going into the hospital - but not for work!  He had been in a motorcycle accident.  I asked him if his life flashed before his eyes - he said that the car flashed before his eyes!  I’m glad he is still alive and has an opportunity to trust in Christ.  He had to go, but he has my contact details and I told him I’d be available to talk any time.

In Cathedral Square, Marty (OAC) and Andy preached when there was a lull in the other noises in the area.  One young school boy took interest in Marty’s preaching, and so when he left, I caught up with him to ask what he thought.  This turned into a very long conversation: well over one hour, if not two.  He had many very genuine and deep questions about life and Christianity.  I did my best to answer his questions, and had multiple opportunities to work though and explain the gospel.  It was a very rewarding, but tiring conversation.  I’ll be praying for this young man.

It was wonderful to be able to have my wife, Ruth, join me for the evening outreach.  Our children were staying with a cousin.  We spent the time walking the streets and approaching people to share the gospel.  At the end of the evening we were reflecting and decided to do a count of all the people we interacted with.  To my surprise it was well over 20!  Not all of those interactions involved complete gospel conversations - but there were many.  It’s amazing how many people just two people can reach in two hours.  Follow up tracts were distributed and, as always, we leave the results in the hands of God.

Thank you for your continued prayers and support of the Christchurch (NZ) team. 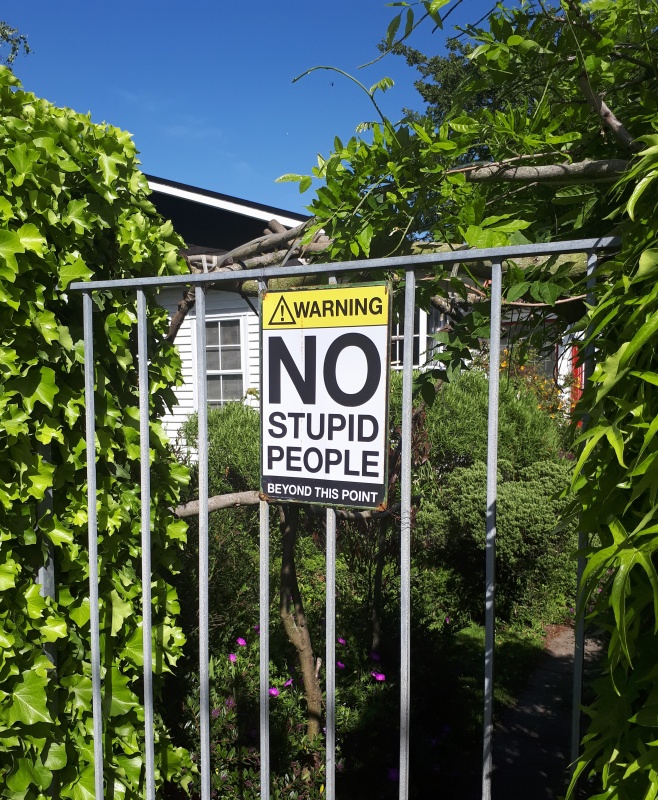 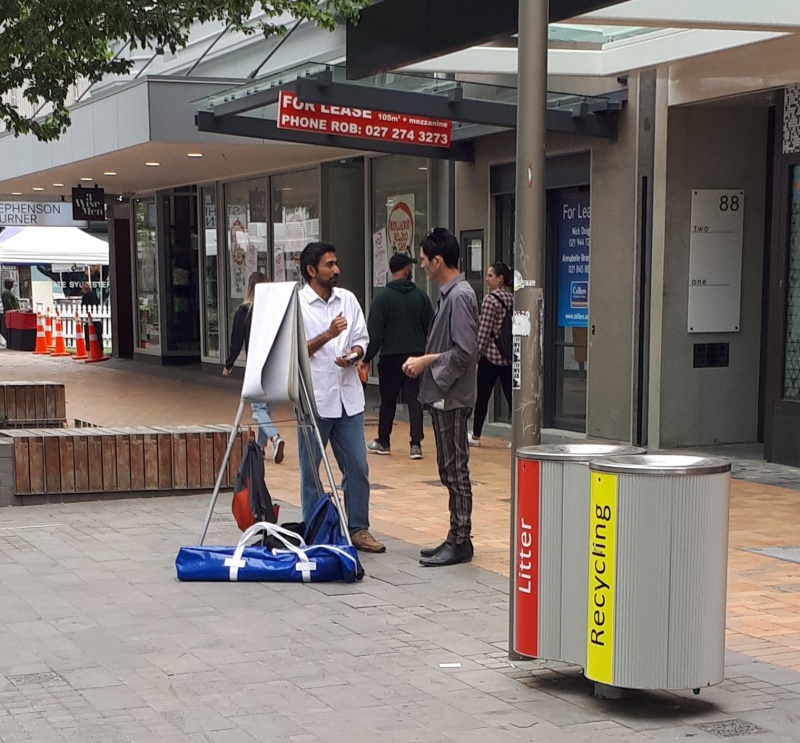