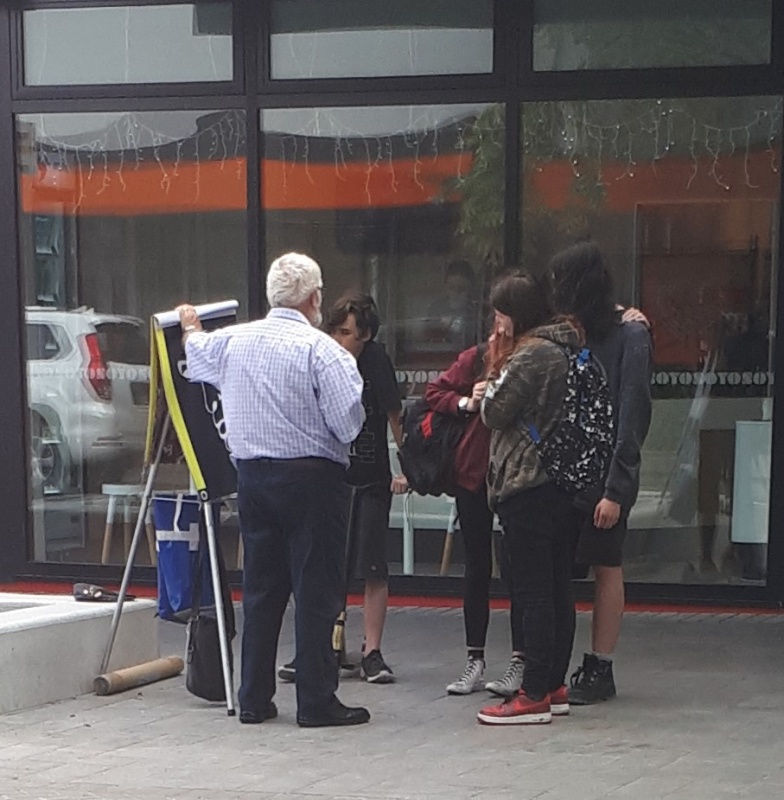 Warm and windy weather in Christchurch (NZ) on both Tuesday and Wednesday.

Roger and I were in Riccarton in the late afternoon of Tuesday.  Roger was straight into a gospel conversation with a group of four (pictured), while things started a little slowly for me.  I was wondering if this would be another of those outreaches where nobody would stop to talk, but it wasn’t long before I was into conversations as well and the outreach got better as time passed.  It became so good, in fact, that the outreach went over by half an hour.  Two of those last conversations I’ll document:

The first started with a young man stopping and being keen to try the good person test (flip chart).  I had made it up to the “road rage” page when I notice another guy was watching the conversation from a short distance.  After a minute, to my surprise, this new guy asked if he could join in!  So with permission of the first guy, I rolled back and started the flip chart again.  I had just made it to “road rage” page again, when another three young people went passed and stopped wondering what was going on.  I offered these newbies tracts - which they accepted - but they were curious enough to want to do the flip chart as well… and then yet another guy stopped!  So all of a sudden I had six people keen to do the flip chart.  With permission of the first two guys, I rolled back and started again.

And something special happened: this group became captivated by the gospel.  It seemed to make sense, and some - by reading their facial expressions and body language - seemed quite impacted.  One of the guys even asked me to pray, and took his cap off (something I don’t normally get asked to do by people who have just heard the gospel)!  It was at this point, that the original two guys decided it was time to move on - one accepted a follow up tract, while the other refused.  But the other four stayed.  I said I don’t normally pray - but I normal plead with people not to delay in responding to the gospel.  But it seemed right, so I prayed with them.  There was a follow up question or two before they moved on as well.

But it didn’t end there.  Another group of four came past - and they were keen to give the flip chart a try - no convincing required.  This usually happens when they know what it’s all about and want to pick an apologetical fight.  But, yet again, the group became captivated by the gospel.  It was like they had been disarmed and lost all will to fight, and just started drinking in the truth of the wonderful grace of Christ in paying the terrible fine for sin.  Twice I asked checking questions, and both times, I got a clear response back showing that they were understanding.

Things were quiet for a moment, and I wasn’t sure what to do - I guess I was enjoying the wonders of the gospel myself, when - slowly but surely - the spell was broken.  One of the girls asked a question about tattoos.  And then the guy asked about drugs.  And then all their justification of sin, and reasons to question the existence of God came flooding out!  By this stage Roger had joined me, and we fielded some of their questions - but I knew it was time to disengage.  They had heard and understood the gospel, and - for now - they were clearly rejecting it.  But they all took tracts, and I hope - while they are alone - the Lord will cause them to think back to the conversation and start convicting them of their sin.  May they be saved for the Lord’s glory - they are in His hands.

On Wednesday I was in the city: Cashel Mall and Cathedral Square.  For some reason, I was feeling a little disheartened - struggling with a feeling that all I’m doing is annoying people out on the streets with a message that they don’t want to hear.  Which I know is true - but yet God has asked us to go to them with this amazing message of good news in spite of the offence it will bring, for the few that will see it as the pearl that it is.

And I had some wonderful and relaxed conversations with people: a retired couple (he went to the same high school as me which really warmed up the conversation), a teacher between jobs, a lady who worked for the city mission.  And after lunch, the stand out conversation was with some construction workers - one of whom had a Christian background but zero comprehension of the gospel.  I had to labour with him for a while to get him to understand the way to heaven.  I’m confident that he understood the paradox that it’s a gift with a cost.  He was very reflective as he walked back to work.

Today is the first anniversary of Operation 513 starting to support me so I can be out on the streets sharing the gospel of Jesus six days a week.  I’m amazed that I’ve survived this long.  I have no idea why God would want an introverted person like me, who hates conflict, to be in a role like this.  And yet, I hope the few of you who have read this far are encouraged by that.  If I can do this, so can you - seriously.  I know I have strengths that compliment my many weaknesses.  And I know you have strengths and weaknesses too - different from mine.  Together, and with God’s help, we can reach thousands with the amazing gospel of Jesus.  Join me.  All glory to King Jesus!