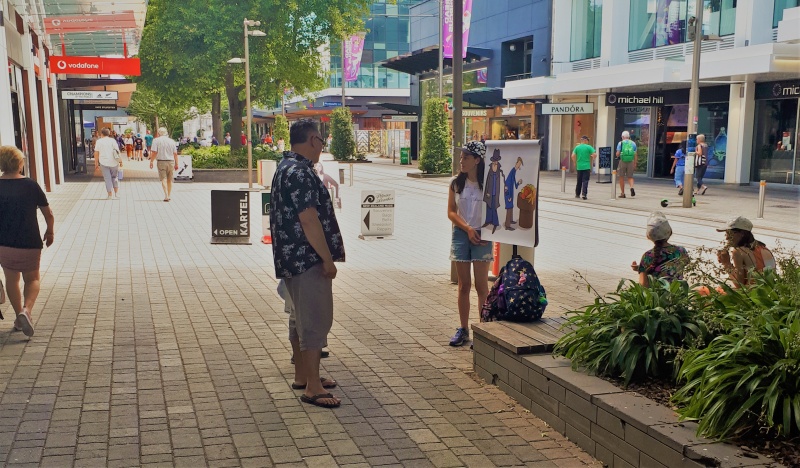 A busy few days of outreach for the Christchurch (NZ) team.  Thursday @ the Eastgate and Northlands bus stops.  Friday: the first gospel + abortion outreach of the year outside Christchurch Hospital, open air preaching in Cathedral Square, flip charting in Cashel Mall, and the evening outreach in the city.  Sunday: afternoon Cashel Mall outreach.

Thursday at the bus stops:  Being the school holidays, there were periods where there weren't many people around (as per the picture), but as I’m looking back on my log of gospel interactions - it’s very long!  The most encouraging thing was all the follow up conversations I had.  I would approach people to start a conversation, and I would get responses of: “oh, you’ve already talked to me” - I’m just not remembering all the people I’m talking to!

I had two positive follow ups, and two “negative” ones - but all of them encouraging.

The first was with a young man at Eastgate he remembered the building / builder, universe / universe maker analogy - and it stuck with him, as he said it back to me right at the start.  But when I asked him what the good news was, he said that we had to be good people - wrong answer!  So I was able to go over the law and the gospel with him again.  He is very open, and so I challenged him to respond to the gospel today.

The next follow up was with the older man I mentioned in a recent report that I had talked to at Northlands.  This time I saw him at Eastgate.  I challenged him about the way to heaven, and he responded with: “I don’t want to talk about it”.  Fair enough, so we parted ways.  Funnily enough, later in the afternoon, once I had moved to Northlands - I bumped into this man for a third time!  I promised him I wasn’t following him.  :)

The third one was with another young man, but this guy he had a good grasp of the gospel.  He had obviously been reading the tract and pondering it.  After a good conversation, he gladly took more tracts and a Bible - he seemed very keen to start reading it.

The last one was with a young man who wasn’t really keen to talk, and yet stuck around to engage with me.  It turns out he was a muslim.  He was challenged about the problem of how God can give justice and mercy - before he moved on to catch his bus.

I was also very encouraged to bump into a friend that I hadn’t seen for years.  I used to play indoor cricket with him.  We had a good catch up.  The last time I talked to him about spiritual things, he had said he had been involved with churches, but wasn’t interested any more.  Well now, his tune was different.  He had recently lost some loved ones to death, and was really pondering the after life.  I challenged him on if he would go to heaven - and his response was: “I’ve said the sinner's prayer” - as though it’s some magic spell.  Sadly, the sinner's prayer has inoculated many people into thinking they are right with God when they are not.  So we had a discussion on how we get right with God (a repentant faith in Christ) and how we can know that is genuine.

One last interaction that stood out to me at Northlands was with a lady whom I asked if she had ever thought about what happens after life.  She said that she had been talking about that very subject with someone in the cafe at her work.  She didn’t want to chat, but she did want a tract and said she would read it!

Of all the gospel ministry that occured on Friday, I will focus on the lunchtime open air preaching.  It was one of the most difficult times I've preached.  For a start, I was on my own.  Next, I attracted lots of hecklers, which was great - but some of our regular hecklers stirred things up which made interaction really difficult.  I felt quite grieved at how people were mocking God (I don’t care if they mock me).  God is not mocked.  And one day they will face Him.  But I’m thankful for the patience of God!  I hope some heard the gospel and will be saved from His wrath.  Near the end, a young man approached me and started asking me questions about climate change.  I said I would talk to him once I finished.  He waited, and we ended up having a one to one discussion where I tried to share the gospel, but he seemed so blind - his focus was on the fact that there was no planet B, that he couldn’t see that there was no life B, which is a much bigger problem for everyone!  Sadly he refused a tract on environmental grounds.

I know this report is getting long, but after a rest on Saturday, I was feeling really fresh for the Sunday afternoon outreach in Cashel Mall - the weather was hot.  A team of six were out - including my three daughters.

The highlight conversation was a walk up with five young people.  I managed to get them to stop, and then get them to engage through apologetics.  Reading their reactions, I could tell one of them was really uncomfortable - she was one of the professing ‘atheists’.  And so I gave them the option to end the conversation, and they took it - two tracts were taken.  But I was really surprised when one of the girls didn’t leave with her friends.  She wanted to know what church I was from, and she said it was really brave what I was doing.  She said she had been a Christian, but wasn’t any more.  But I could see that she was really thinking heavily about the important questions of life.  She was one of the ones that took a tract.  She wanted to know how she could get in touch - which I told her.  I could tell she had deep questions, but she had to go.  I pray that her questions will be answered, and that she would understand the gospel from the tract - that she would be saved by God and for His glory.  Amen. 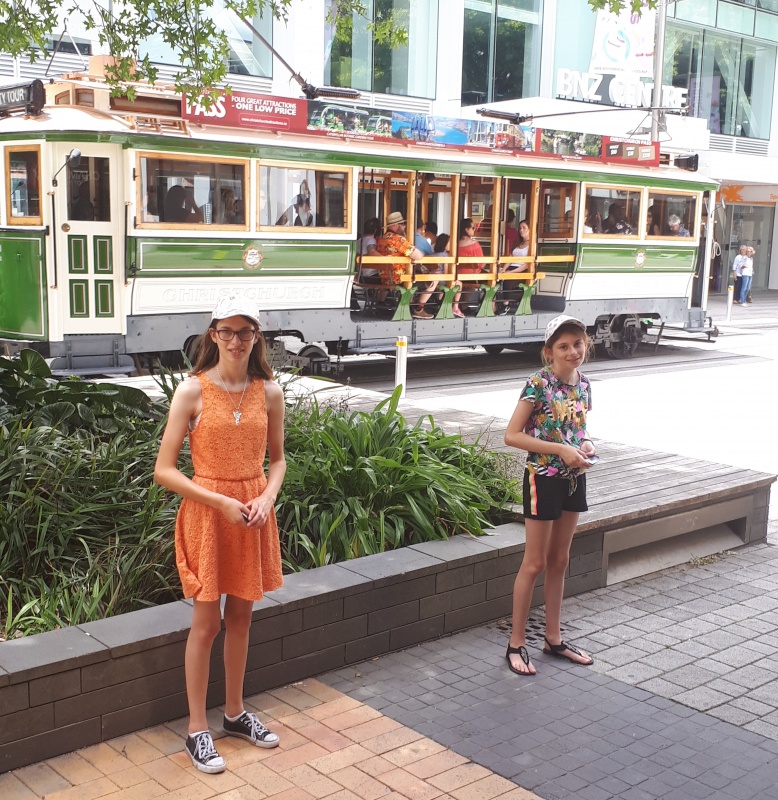 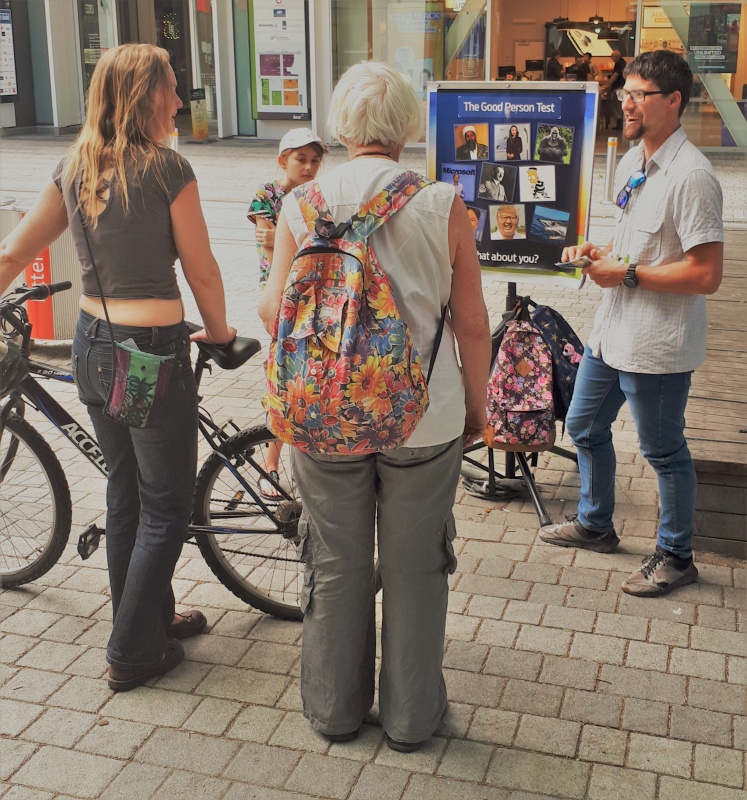 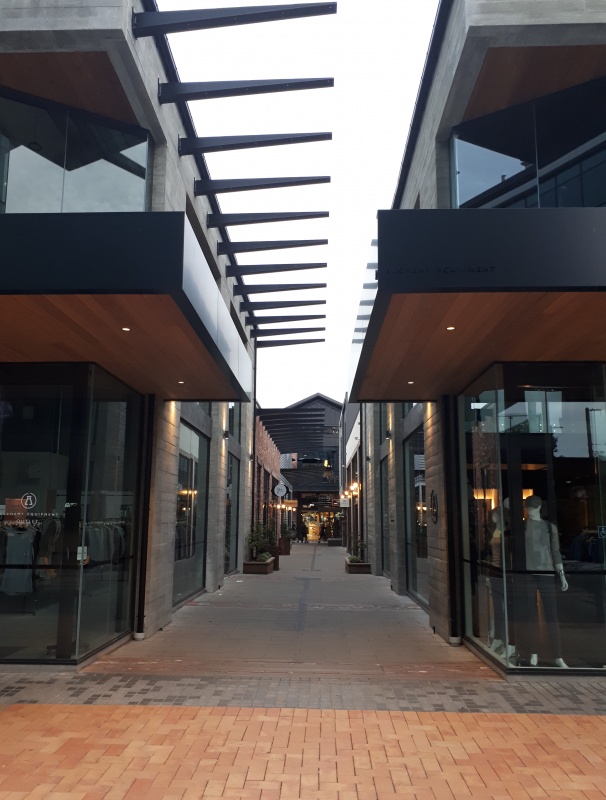 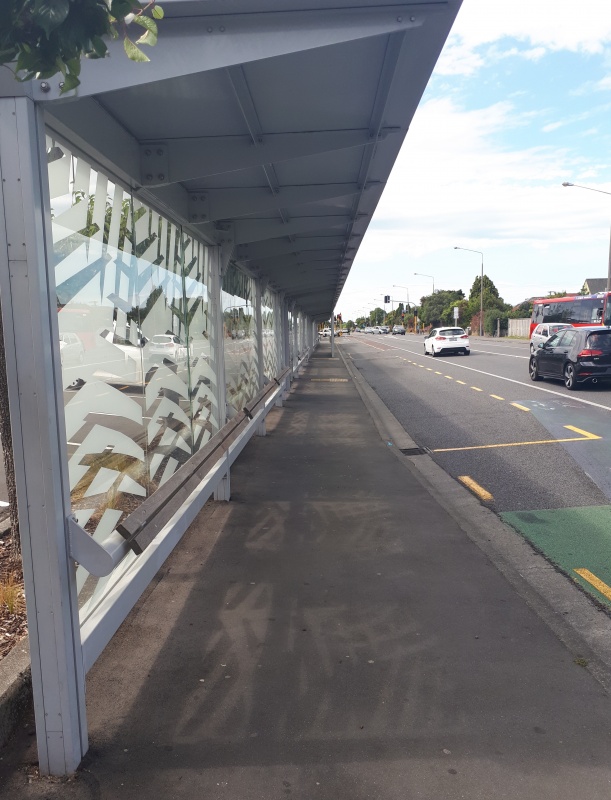