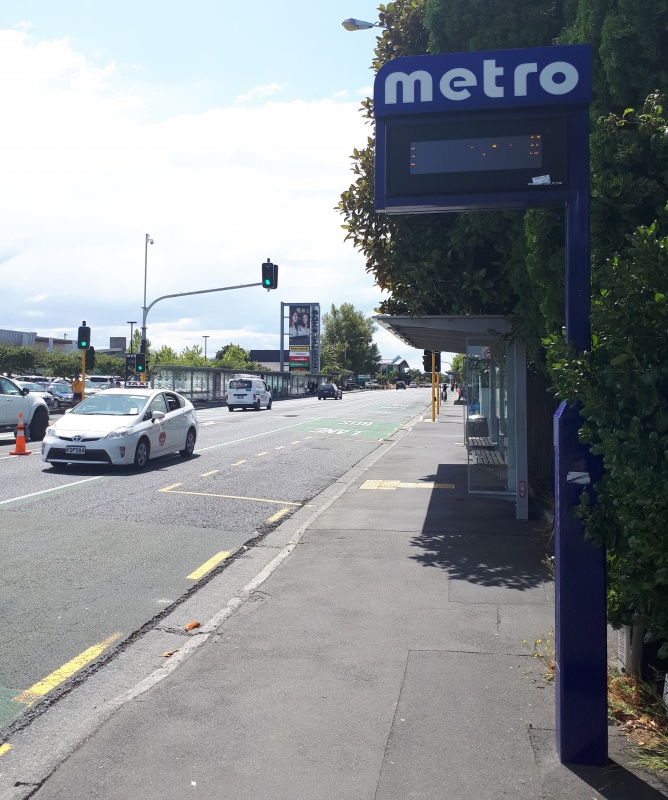 The highlight was a ten minute gospel conversation I had with a man at the Northlands bus stops.  He believed in God, heaven and hell.  He also thought he was good enough to go to heaven, but he was keen to try the good person test to confirm this.  So we went through the mini flip chart together.  Going through the law, and understanding the holiness of God was an eye opener for him, and then he heard the wonderful good news of justification by faith in Jesus sacrifice.

I then proceeded to the second question: an analogy about a guy who trusts that Jesus paid his fine, but then sins five minutes later then dies.  Heaven or Hell?  He responded with Hell.  To my amazement, he articulated that the reason we go to heaven is by trusting that Jesus paid the fine… but he said, but you have to be a good person too.  He had gone from believing his good deeds would save him, to simply adding Jesus to his good works!  So I was able to explain that it was only by faith we are saved, and not by our works.

And then his thinking went to exactly what the mini flip chart was anticipating.  He said, “but that means we can trust Jesus paid our fine, and then do whatever we want, right?”.  He was finally understanding the grace of God!  It was my joy to turn the page and use the fireman analogy to explain that if we are trusting that Jesus has paid our fine, we will be a changed person.  If we understand His great sacrifice, we won’t want to sin any more (even though we will), out of thankfulness we will want to obey Jesus, and there will be a growing holiness in our lives.  He understood!

It was about now that his bus arrived and he had to go, he seemed to really appreciate the conversation, and took a tract before he dashed off.

Yes, the gospel message is a simple message, but I’m really appreciating that the concept of faith alone is very foreign and needs to be explained well.  It’s so natural to think we need to be good people to earn favour and reward.  But we are saved by grace, through faith in Jesus to the glory of God alone!

If you haven’t already got one, get a mini flip chart and try it out.  You can purchase here: NZ, AU

So many other gospel interactions occurred, but I don’t have the time to write about them: I had a follow up with a young man who said he went to church on Sunday.  He listened as I shared the gospel with two others beside him, and afterwards he agreed that it is truly good news.  I saw my regular JWs again.  They were happy to talk, but only if it was about the weather.  Our debates have been a bit “stressful”.  I continue to pray for them.

It didn’t all go well though.  I was sitting down taking notes of a conversation when a lady sat down next to me, once I had finished with my notes, I turned to her and offered her a tract.  She semi exploded: “no, I'm not interested, take it away!”.  I said: “no problem, you have a nice day”.  She wasn’t expecting me to react that way, and she calmed down: “you have a nice day too”.

Once I was at Eastgate, one of the hardest conversations I’ve ever had occurred.  A offered a tract to a guy.  When he saw it he gave a disgusted look and walked off.  But then he turned around and wanted to talk about it.  So we settled into a long conversation, where he challenged me, and, by God’s grace, I was able to give him reasonable answers.  He slowly started getting agitated, but I kept responding to his arguments.  And I think this was a mistake.  I should have backed off, as he wasn’t open to any truth or reason.  He just became angry.  Eventually he started getting out of control, so I said, “look, you need to calm down, I’m not going to answer if you get upset”.  Eventually I stopped responding to him, but this just enraged him more and he started getting abusive and racist.  I tried looking him in the eyes, I tried looking at his feet.  But it was out of hand and nothing was working.  So I said, “look, I need to go”, and I started walking off, but this just enraged him more.  He started standing in front of me so I couldn’t walk away.  I was left with no choice, so I pulled out my phone and called the Police.  When he saw that I was actually dialing the emergency number (I didn’t know what the non emergency number was), he left (thankfully).  I talked to the police, and I apologised for disturbing them, but they were very understanding, and wanted to take details in case he came back and I needed to call again.  I thank God for my protection.  And I was very grateful for the understanding of the police.

I was rattled.  But I wasn’t going to let this stop me.  I stayed and had two more gospel conversations before leaving.

So that was just the highlights of Thursday, and I haven’t had a chance to write about Friday yet - I’ll leave that to the next report.  Thank you for your prayers!  We don’t need to fear man, or the devil - the worst they can do is take our life.  Fear God!