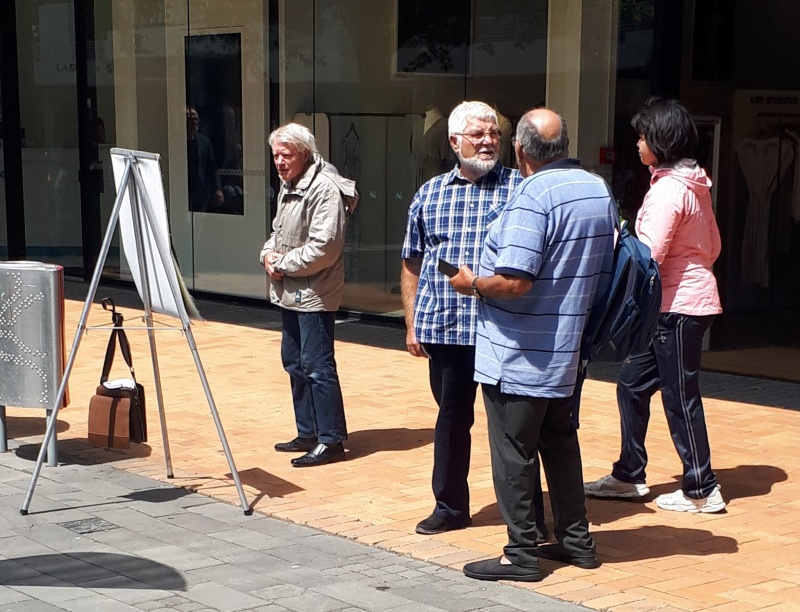 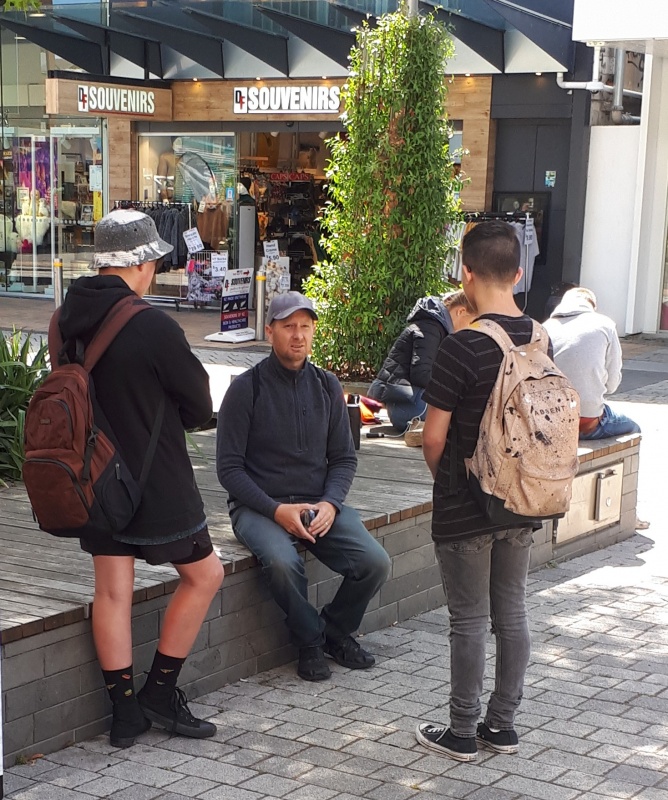 I ran out of time in my last report to write about Friday’s outreach, so this report will cover that, plus Saturday and Sunday.

Friday started with the gospel + abortion outreach, which was relatively quiet.

Things became eventful with the open air preaching in Cathedral Square at lunch time.  I went first.  I looked at the spot where Kelven (the Busker who died recently) and I couldn’t help feeling grieved and ended up mentioning him.  This caused one of the stall holders to come over to talk to me about him.  Was Kelven in hell?  I answered his question (and I was able to follow up with him afterwards).

Steve the Atheist turned up near the end and started to goad me.  He told me to hurry up and finish, so I decided to continue longer.  When I finally finished.  There were a few people standing around.  Two German tourists came over and wanted to understand what was going on, and why that man was being so mean.  Roger was able to share the gospel with them!  Steve aids the gospel.  He is a blessing from God!

One of the wizards ended up getting into a semi public debate with Andy over how we know things to be true.  The conversation simmered into a long private chat between them (pictured).

The team then moved to Cashel Mall.  Roger was popular.  Note the picture where Roger is talking with one guy, and another guy stops to look at the flip chart - Roger was able to share the gospel with him.

Andy and I came back into the city in the evening for another outreach.  Right from the start, I walked into a guy who recognised me, and knew my name.  Apparently I had talked to him a few months earlier.  He had obviously been positively impacted, and said he was keen to come along to church.

Later, Andy and I were walking down Oxford Terrace.  There were three guys sitting down who we could potentially approach.  The usual doubt came over us - they will probably reject us.  But we discussed it - that is the worst that can happen, so we decided to approach them!  To my pleasant surprise, they were open to a gospel conversation.  They were tourists from the UK.  They came to an understanding of the gospel, and were challenged to respond.

Soon after, we were in the bus exchange, and I tried approaching two guys - they weren’t interested - we were rejected.  Oh well, we politely moved on.  But Andy was able to start a conversation with someone else nearby.

I was back in the city on Saturday.  The weather wasn’t the best, and it was quite a slow outreach.  But I had a great follow up with a young man who we have been talking to, on and off, for quite a long time now.  He seems to be opening up, I’m adding him to my prayer list.

I also had a fantastic gospel conversation with a young man from Holland.

But the highlight was the outreach on Sunday.  Nice weather, and lots of people in Cashel Mall.  A team of seven.  I set up my flip chart, and was just taking a drink of water when four girls walked past and wanted to try the good person test! (pictured)  It was a non stop outreach from there.

Two of the girls got cold feet once they understood where it was going, but the other two were really interested.  The first two were constantly disrupting the conversation, so I was glad when they left so I could share the gospel with the other two.

Right at the end of the conversation, Steve the Atheist turned up to disrupt things.  I’m glad they had already heard the gospel - they moved on and left me with Steve.  But again, Steve only aided the gospel.  A guy on a bike stopped to find out what the fuss was about.  I turned to him and asked if he would like to learn about Christianity.  Much to Steve’s disgust, he was keen, and so we launched into a conversation, ignoring Steve.  Steve decided to leave me alone and annoy other team members.

After I was finished with that conversation, I was straight into a follow up conversation with a passionate young vegan.  Steve came back to butt into that conversation too, but when he realised it wasn’t stopping the conversation, he got bored and moved on.  The vegan guy is a walking contradiction, and completely closed to reason.  As he is so passionate about life, I challenged him on abortion - which he supports.  I caught him in his inconsistency - and he knew it.

The outreach finished with a long conversation with a guy who had been listening to one of the gospel conversations Thomas was having.  I gave him a tract, and said he would be welcome to come and chat with me on the other side of the mall.  About ten minutes later, he came over (pictured).  He seemed challenged, and appreciative of the chat.

After the outreach, the team enjoyed ice cream before heading home.  I praise God for all the wonderful gospel opportunities!  Be encouraged to step out and join us in the harvest! :) 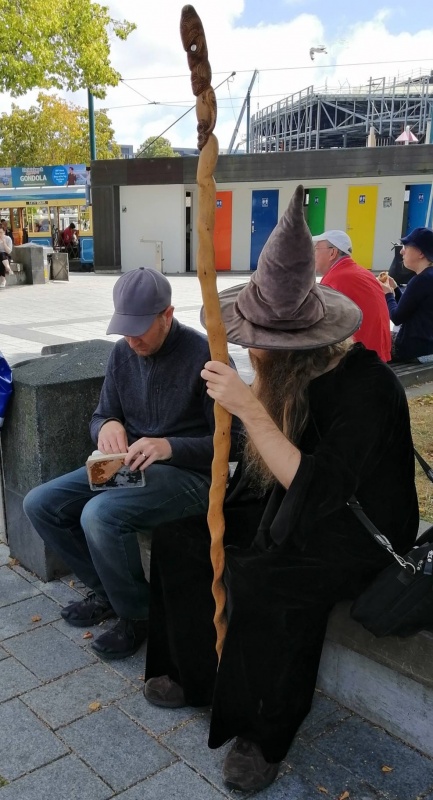 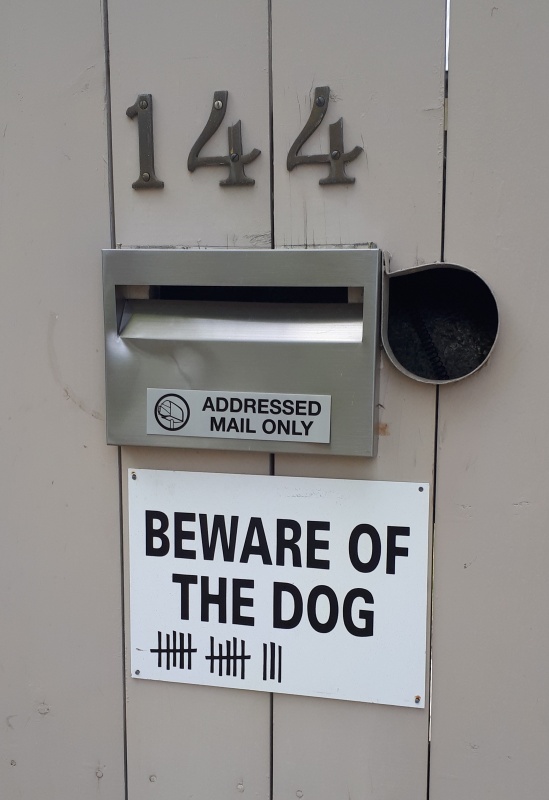 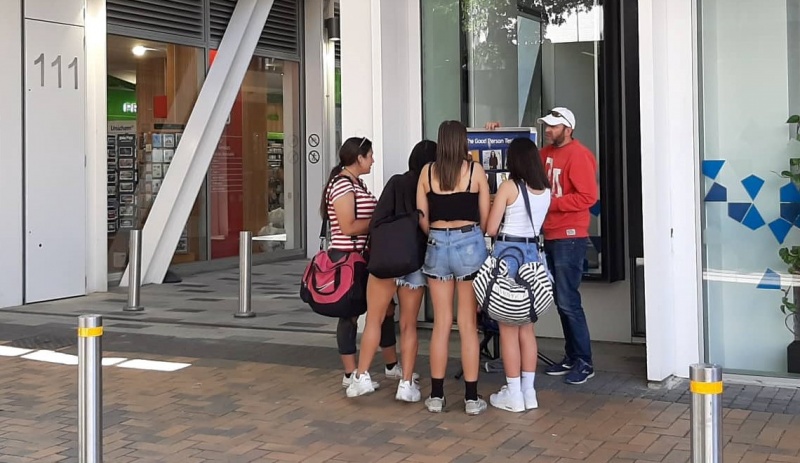 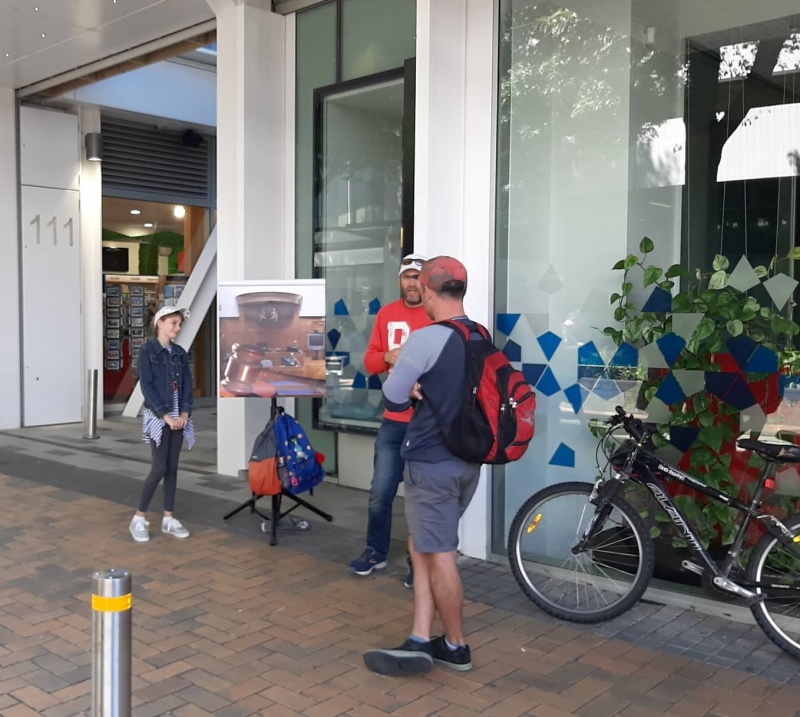