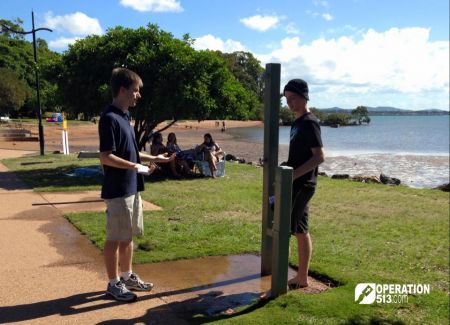 Your amateur reporter is back after a partial recovery from a sizzled modem router. Thankfully God's good news is unchangeable as is our Redeemer, Heb. 13:8. Wellington Point was somewhat lacking the usual number of  tourists. As always, God led us to contact those thar He wished to be spoken to today.

Ryan & Fynn had a long conversation with an Argentinian man (a first from that country at W. Pt.) Initially, he claimed to believe in God and he was cruising through life doing more good than bad. When he was able to see his need for the Lord Jesus Christ, he offered an array of excuses for not dealing with Him. Finally, he was happy to receive a gospel of John: may the Father draw him to the Son and the Holy Spirit regenerate him.

Lee-Anne and Railee met a variety of people including a lass who attends a prosperity gospel gathering and who understands the gospel. When asked her assessment of the teaching, she said it was fine. A few more questions had her telling that she seldom opened God,s word. She was encouraged to start doing so regularly.

I was encouraged by meeting with Sophie, Jan and Esther from a local Korean congregation. Jan had met a op513 person before who had challenged her claim to be a Christian. Having been a regular at Hope Reformed Baptist church, Jan answered well. Sophie's dad is involved in outreach and she received her Aussie name from Rev. Dr. Matthew Kim. (He taught me at the Theological Hall in the 1980s. They were likewise encouraged and as they were leaving, Railee who had just joined us, gave them some tracts to pass on. They liked them, especially the "Which One is Right?" tract.

There is more to pray for but hopefully this whets your appetite to see God bring His elect children home until they are all safely in the one fold under the One Shepherd.

To God be the glory, great things He always does.