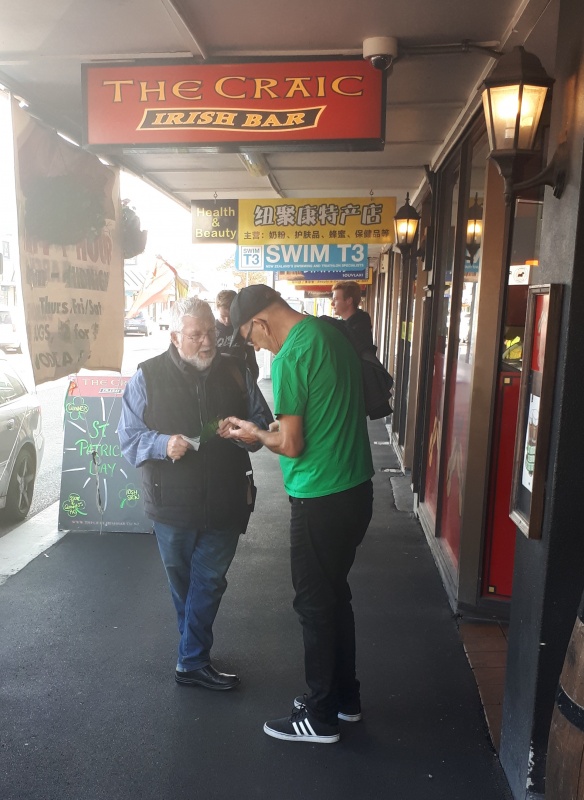 Tuesday was St. Patrick’s Day!  There was a team of two who spent two hours on our usual Riccarton outreach in the late afternoon, and then in the early evening we were outside two Irish pubs doing the St. Patrick’s Day test with people.

During the Riccarton outreach, I had four conversations.

First up was a Catholic man that one of the team has talked to before on a Friday night outreach in the city.  Sadly, he wasn’t open to reason in any way, and so I let him move on - he didn’t hear the gospel.

I then had a lady stop, interested in the flip chart.  She liked to talk (which is okay).  So it was a longer conversation, but she was all over the place in her thinking and, again, I couldn’t reason with her.  But she did stay to hear the law and the gospel.

I was taking notes of that conversation, when Roger called out to me.  I looked up, and I had two high school students looking at the flip chart.  They were brother and sister.  And they were very sharp thinkers - so a good conversation was had.  I slowly took them through the logic of how we know God exists, the law, and the gospel, then through the series of checking questions.  There was resistance at each point, but we worked through the logic, and they didn’t seem to be able to fault the logic.  They understood the gospel.  But when I challenged them to respond at the end, they rejected the gospel.  I asked them why.  And they were speechless.  I explained why most reject it (it’s not that it’s not true, but the cost is too high).  And I pleaded with them to read through the tracts I gave them, and to discuss it with their parents.  They appreciated the conversation and went to shake my hand… but we tapped elbows instead!  (If you are reading in the distant future, it’s because of Coronavirus.)

I finished up the outreach with a short conversation with an older lady who was very interested in the flip chart.  She grew up in the church, so I asked her what we need to do to go to heaven: good works were her answer!  So I briefly explained why it can’t be good work, and what the good news is.  She seemed struck.  She became very interested in what church I went to, and got me to write down all the details.  She said she would read the After Life tract I gave her.

For the St. Patricks Day outreach, we were outside two Irish pubs over the two hours.  But, because of Coronavirus, there were not many people around (last year it was similar, but due to the mosque shootings).

But this did not stop us having some great conversations.

My first was a long conversation with a guy walking home after work.  He followed Viking religion, and was resistant.  But we had a nice long conversation where I was able to make some inroads into why the Christian worldview makes sense.  He heard the law, and I touched on the gospel.

At the second pub, the highlight conversation was with a group of three.  Two of them just wanted to go into the pub, but the third guy really wanted to do the St. Patrick’s Day test.  He wanted to know what his prize would be if he got them all right… he said I would have to do a handstand if he did.  I agreed.  To my amazement, he was getting the questions right.  But, to my relief, he stumbled at the final hurdle.

Then I asked him what the message of St. Patrick was (answer: the gospel).  He then triggered to what we were doing.  He was impressed.  He said if he knew we were Christians right from the start he would have said a foul word to us.  But now that he was engaged, he was keen to chat about religion.  And boy did he like to talk!  He would often say “let me finish, let me finish”.  Because of this, I didn’t really get to share the gospel with him.  But he did take a tract!  I hope he reads it, and that some of the things we talked about would resonate.

On Wednesday, I was back in the City.  I ditched the flip chart and decided to do “walk up”.  I made it all the way down to Ara on this outreach.  I had four wonderful gospel conversations.

The first was with a young man who recognised me as he was walking towards me while he was crossing a road.  He said hello, and even used my name!  I didn’t remember him, but then he triggered my memory saying that we had talked during a climate change protest last year.  He held to reincarnation, but also believed in God, heaven, and hell.  He heard the law and the gospel again.  But he was resistant because he understood the cost.  He said he wanted to enjoy life, and then he would consider it.  Inwardly I just shook my head, and tried to get him to understand what he was saying.

My next two conversations were with tourists: the first was with three Germans who were heading home early because of Coronavirus.  Initially, only one of them was engaging me in gospel conversation, but by the end of the conversation, they were all interested, and all took tracts.  The second was with a guy from Holland.  At one point, I thought I was going to lose him as we discussed how we know God exists.  But I quickly moved on with the law and the gospel, and he re-engaged and seemed genuinely impacted.

The last conversation was outside Ara.  It was with three students.  Interestingly, homosexuailty and abortion came up in the conversation.  But they all heard the law and the gospel.

I praise God for all these opportunities.  We may be reaching people one at a time, or in small groups.  But as the days, weeks, years pass… many people are being reached with the gospel.  All glory to God.  In God’s timing, may many come to saving faith in Jesus. 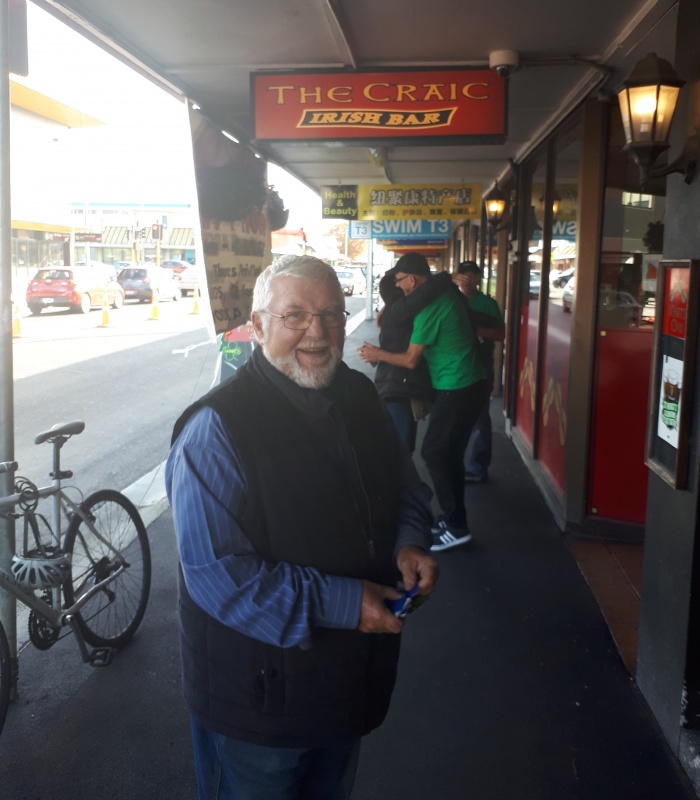 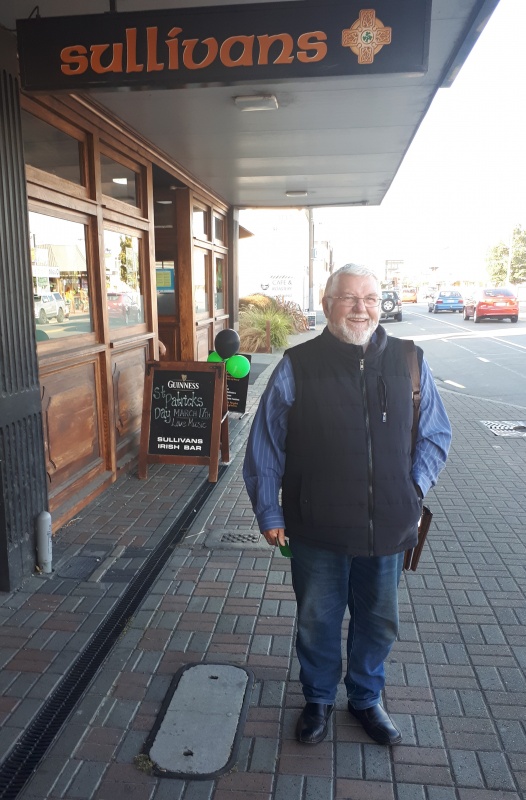 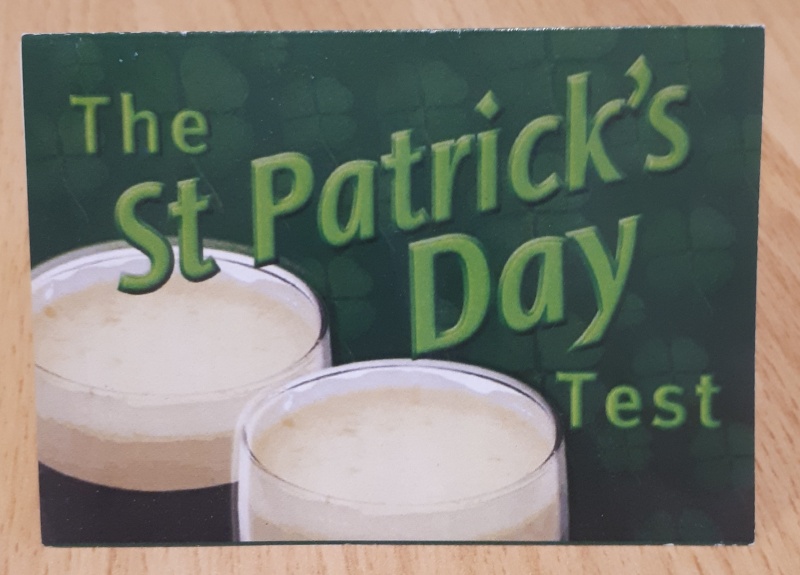 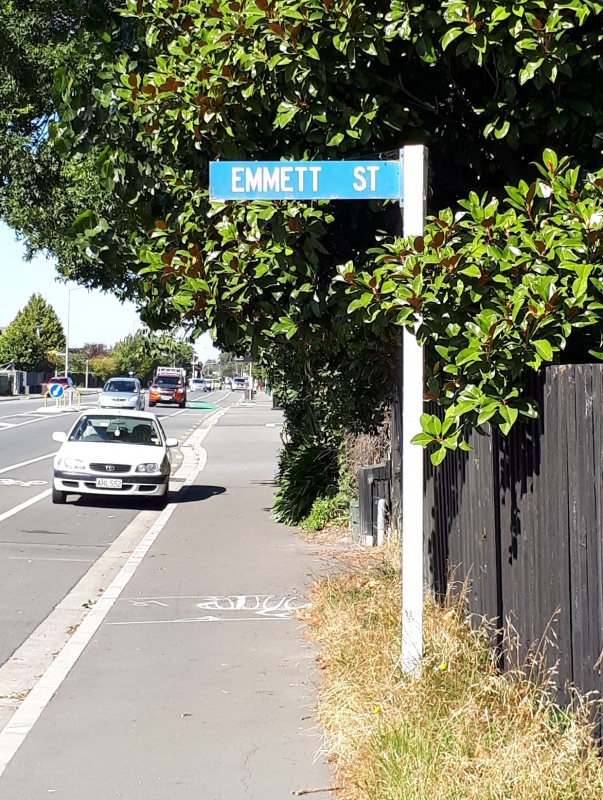